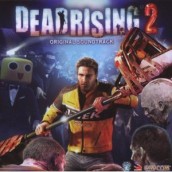 Zombie source music has never been this fun

When it seems that just about every last note has been used to dismember, decapitate and blow the brains out of the endless zombie hordes who are attacking via film, TV and videogames, along comes some DEAD RISING 2 dudes named Oleksa Lozowchuk, The Humble Brothers, Jeremy Soule and Klayton to show there are infinitely more variations to this dance of death, which turns into a thoroughly fun slamdance of styles for this game sequel that brings on the flesh eaters in spades.

With the action taking place in “Fortune City,” the new RISING satirically starts out with hellbilly rock and Diva-pop strutting of the zombie-bashing game show “Terror Is Reality” before the rules naturally are off with an undead invasion. It allows the music to venture from the more than capable electric guitar rhythm kill stuff into far more interesting territory with distorted country strumming, the last gasps from the accordion of Chef Antoine and the lonely pianos of post-apocalypse desolation.

While the first CD of RISING 2 is effectively chilling, it’s really the second disc that has the unexpected goods as it rampages through various chain stores in Fortune City, venues that include a Peep Show, Cheesecake Mania and Speedy Expresso. While our tour deceptively starts off like a languid journey through the eighth level of shopping mall Muzak hell, the scorers are soon employing ranchero music, spaghetti westerns, Django Reindhart jazz, cartoon slapstick, ’80’s hairband ramp-ups and a Bratwurst Polka on the stylistic turn of a dime- switches that are deliberately dizzying for this crazy “source” music that’s just as clever as the real undead-pummeling stuff.

As the zombie holocaust increasingly takes over mass media, there’s truly nothing better than music that decides to play it with DEAD RISING 2’s humorous bite.