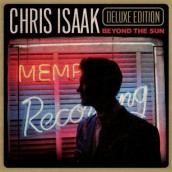 Whenever you hear someone digging into the past for a bunch of cover songs, it usually isn’t a good sign. Yet Chris Isaak, the smooth singer behind “Wicked Games” has decided to travel back to the songs of the 1950s that were recorded at the legendary Sun Records studio in Nashville with his new set BEYOND THE SUN.

And hot damn if it doesn’t work.

Isaak is a rare performer, whose silky smooth and emotive vocals have always had a bit of a retro tinge to it even with his own modern sensibilities thrown into the mix. So tackling songs made famous by Elvis Presley, Jerry Lee Lewis, Roy Orbison and Johnny Cash is a natural.

There’s a single disc and a 2-disc set of BEYOND THE SUN (you’ll want the latter which clocks in at 25 songs) and both contain some great, effortless playing and singing. He’s captured a time and place that no longer exists, yet it still sounds fresh.

There’s some obvious tracks here – “Ring of Fire”, “Great Balls of Fire” and “Can’t Help Falling In Love With You”, but it’s the more obscure tracks that are a real revelation. With songs like “I Forgot to Remember to Forget”, ‘Miss Pearl” and “So Long, I’m Gone” it sounds like Isaac was the originator of them and brings a powerful immediacy to them.

BEYOND THE SUN is a fresh take on an old sound – it’s filled with playfulness that Isaac hasn’t attained in some time – and it also allows him the chance to show a peppier side of himself.