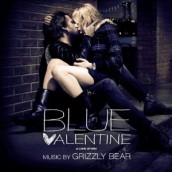 Where NO STRINGS ATTACHED stands as a date film that’s likely to get you lucky, BLUE VALENTINE practically ensures you’ll never see your lady again, if not one that will plant the seeds for a future divorce with the wife you’ve foolishly taken to see the flick.

That being said, BLUE VALENTINE is also certainly one of the best feel-bad relationship films ever made, a continual gut punch to the idea of true love. So it’s only right that its music should be as raw as its downward-spiraling couple’s emotions.

What Brooklyn band Grizzly Bear delivers goes even beyond that pale. In the movie, it’s a near-cacophonous, purposefully weird mix of angry, retro-rock energy that plays like a human centipede’ing of Sonic Youth and Elliot Smith- about as different from the pleasing, jazzy soulfulness of Grizzly’s work on JACK GOES BOATING (also on Lakeshore). If some people thought that THE SOCIAL NETWORK’s electronic loopiness clashed with that film, then Grizzly’s VALENTINE is half-often WTF weird in its pursuit of just how bizarre music for an anti-romance can get- and perhaps shouldn’t.

On this generous album that features much more Grizzly Bear than what’s heard in the film, BLUE VALENTINE is nothing less than 100% mesmerizing. Divorced from all the screaming and overall non-musical tsuris on the soundtrack, Bear’s work somehow goes down easier- if that’s an operative word for it. But while Grizzly’s score and songs seem a bit less confrontational, it’s still no less painful for the newly revealed lyricism on hand.

Grunge combines with 60’s acid rock riffs and folk instruments, player pianos and raw guitar chords bringing even more improbable fantasy teamings to mind like Jon Brion and The Grateful Dead. Yet Grizzly Bear is its own trippy alt. animal here, with stream-of-conscious jam sessions that capture a true, unplugged power. It’s part anguish, part delicate child’s song, no more so than in a  “Lullaby” that captures the sound of an innocent child torn apart by her parent’s angry strumming, all too the decidedly ironic lyrics urging her to “Cheer up.”

Thankfully, Grizzly Bear also has a theme for their powerful madness, a melody most beautifully voiced in the end title “Foreground” (the album also offers up Ryan Gosling’s purposefully golden throat spin on “You Always Hurt the Ones You Love”). More concept album than actual soundtrack as such, Grizzly Bear’s beautifully haunting BLUE VALENTINE serves best as its own journey into the sad, mesmerizing music of love’s bitter collapse- strings attached, and then some.