Breaking News: Why NBC’s LOVE IN THE WILD reality dating show is different than other dating shows 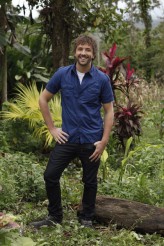 Breaking News: Why NBC’s LOVE IN THE WILD reality dating show is different than other dating shows

What happens when you combine SURVIVOR with THE BACHELOR? You end up with the new NBC dating reality show LOVE IN THE WILD which debuts this summer.

Set in Costa Rica, is places a bunch of unlucky in love single people and puts them through adventure challenges to potentially bring certain couples together (and hopefully finding lasting love).

At today’s NBC Summer Press Day 2011 in Pasadena, CA, executive producer Tom Shelly explained why these contestants were so different than those other dating shows.

“We went after people who were unlucky in love and looking for relationships and wanted to put them under pressure above and beyond real life,” says Shelly.

David Goldberg, Chairman of Endemol North America adds that these are a real people from firemen, policemen and doctors.

“They aren’t your typical reality contestant who want to come on a show, rip off their shirt and show their bodies to get their 15 minutes of fame,” says Goldberg. “The cast has legitimately had months and years where they couldn’t connect with [someone else]. [So they decided to] go on this show, go through this adventure and see if they could find a soul mate. We think three or our couples are legitimate long term couples.”

Breaking News: THE VOICE coach Cee Lo Green said “Forget You” to THE X...
TV Review: SLEEPY HOLLOW – Season 1 – “The Golem”
THE AMAZING SPIDER MAN 2 Highlights this week in Blu-ray, DVD and VOD ...
THE BEST SCORES OF 2016 - Part One