Home » Movie Review: THE CHRONICLES OF NARNIA: VOYAGE OF THE DAWN TREADER 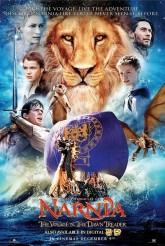 Movie Review: THE CHRONICLES OF NARNIA: VOYAGE OF THE DAWN TREADER

A fantasy follow-up seriously lacking a true sense of wonder

For those who take the pace, wit and generally immersive atmosphere of the HARRY POTTER films for granted, THE CHRONICLES OF NARNIA: VOYAGE OF THE DAWN TREADER is the latest example of the fact that making family-friendly fantasy is not as easy as it looks.

The third of the films based on C.S. Lewis’ CHRONICLES OF NARNIA follows characters introduced in THE LION, THE WITCH AND THE WARDROBE and its sequel, PRINCE CASPIAN. Siblings Edmund (Skandar Keynes) and Lucy (Georgie Henley), now in their teens, are waiting out WWII at the home of their aunt and uncle; older siblings Peter and Susan are in America with their parents. Edmund and Lucy miss their days of adventure in Narnia and are coping with annoying, resentful younger cousin Eustace (Will Poulter), who can’t understand why they keep nattering on about an imaginary country. Then a painting on the wall comes to life and Edmund, Lucy and Eustace are all transported to a Narnian ocean, where they are rescued by a vessel captained by now-King Caspian (Ben Barnes). Caspian is happy to see his old friends again – he and his crew are off to find what became of seven missing lords. There’s an evil mist, a dark island, temptations and some deus ex machina up ahead.

There’s no point in being too hard on VOYAGE, which is a bit like one of those European children’s films that were popular in the Sixties and Seventies. However, director Michael Apted and screenwriters Christopher Markus & Stephen McFeely (the scribes are veterans of the first two NARNIA films) and Michael Petroni rely way too much on unearned emotions. It won’t do to have Edmund and Lucy, who’ve been to Narnia several times already, completely awed by being transported magically to the kingdom, but a little authentic joy would have gone a long way. Instead, the script has them behave as though they’ve arrived at a good surprise party.

The one character who conceivably could have a sense of wonder here is Eustace. Instead, he’s a supercilious jerk, who has to go through the experience to learn a lesson, but there’s nothing new to say on the subject. More’s the pity, since the way Eustace gets his trial by fire (somewhat literally) is one of the more charming and well-executed parts of the film.

This is no fault of young actor Poulter, who enthusiastically dives in to Eustace’s obnoxiousness per the script, but long before the character gets around to learning his lesson, we have simply had it with his company. The jokes are a bit creaky and the voyage is episodic, to say the least. More, the temptations facing Edmund and Lucy are pretty tame stuff compared to what they’ve faced before.

Simon Pegg has good fun voicing the swashbucking rodent Reepicheep and Liam Neeson is reliably regal and reassuring as Aslan.

The 3D is decent if unexceptional. The coolest use of this technique here is when the bottom of the screen lines up with the ocean – there’s so much depth between the foreground and the horizon that we half-expect salt water to spill over into the theatre.

THE CHRONICLES OF NARNIA: VOYAGE OF THE DAWN TREADER isn’t exactly bad, but it lacks magical resonance and does not make up for it in character depth. If there’s a need to see a new movie with dragons and minotaurs, this will do, but a rewatching of THE LION, THE WITCH AND THE WARDROBE may be more fulfilling overall.