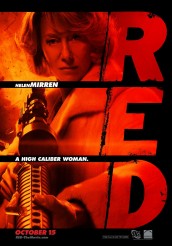 What happens to old CIA (and MI-6, and KGB) agents once they’re put out to pasture? Well, according to RED (the film’s acronym for the status of Retired, Extremely Dangerous), they can lead absolutely mundane lives. Unless of course somebody tries to kill them, in which case, they return to form in no time flat.

This isn’t an entirely new premise, but director Robert Schwentke and screenwriters Jon Hoeber & Erich Hoeber, in their adaptation of the graphic novel by Warren Ellis & Colly Hamner, have made a thoroughly entertaining film that is deliberately both fun and funny. The characters are certainly aware of their mortality, but this never gets in the way of them (or us) having a good time as they are called upon to use their considerable expertise once again.

Frank Moses (Bruce Willis) is living a comfortable life in the suburban Midwest. His main joy in life seems to be flirting over the phone with claims adjuster Sarah Ross (Mary-Louise Parker), who handles his retirement checks, which Frank keeps ripping up so he has an excuse to call her again. However, when a CIA hit squad attacks Frank at home in the middle of the night, he dispatches them single-handedly, then flees.

His first stop is to kidnap Sarah, as he correctly deduces that their innocent contact has put her in danger, then starts trying to figure out who is trying to kill him and why. To this end, he visits old allies and enemies, including Joe (Morgan Freeman), now in a retirement home, extremely paranoid Marvin (John Malkovich), elegant wetworks expert Victoria (Helen Mirren) and  urbane Russian operative Ivan (Brian Cox). On their trail is grimly proficient CIA agent William Cooper (Karl Urban) – but who has sicced him on Frank in the first place?

RED is full of explosions, and there are plenty of laughs, but its chief pleasures come from watching this group of skilled actors – with additional contributions from Richard Dreyfuss, Julian McMahon, James Remar and Ernest Borgnine – play off each other with evident delight. Nobody can go wrong handing Mirren a machine gun (or anything else, for that matter). It’s not the first time she’s played a killer, but watching her go from tea-pouring suburbanite to bloody automatic-weapon-wielding determination is grand.

Make no mistake, Willis is the protagonist here, but although Frank is completely adept at what he does and quite cognizant of his proficiency, he’s much less cocky and macho than many of Willis’ other heroes. Frank is driven by a desire to find out what the hell is happening and to make it stop by any means necessary, but what he really wants is to protect Sarah and for her to like him. Seeing Willis be quizzically gentle with Parker gives the film an admittedly “gooey center” (as Victoria describes Frank’s inner self), but it actually balances out the fireworks in a good way.

The filmmakers blessedly spend relatively little time with Sarah as the bewildered kidnappee, bringing her up to speed as an enthusiastic novice adventurer as soon as is narratively possible. Parker brings sparkly-eyed glee to a woman who is finally getting some excitement in her life. Malkovich is enjoyably goofy without being over the top as Marvin, Freeman is as usual a presence of great comfort and gravity and Cox is just swell.

Schwentke keeps the pace racing along, fast enough so that questions of logic and logistics don’t often occur to the viewer, while still keeping us clear on what’s going on.

RED isn’t particularly deep – yes, the characters know they’re older than they once were, but that doesn’t seem to stand in their way once they rev up. This does give the movie an extra little current of joy.