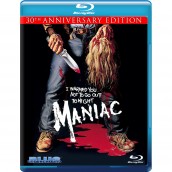 One of the most notorious slasher films of the 1980s was the William Lustig directed MANIAC – an unapologetic gore fest starring (and co-written by) Joe Spinell and featuring graphic gore effects by FX maestro Tom Savini.

With the unrated tag (No One Under 17 Admitted, promised the posters), the movie was able to take things to the extreme – from scalpings, massive shotgun blasts to the head and other unsavory death scenes. It made for an unsettling experience and one that created a massive outcry from various special interests groups when it hit theaters in 1981.

Think of PSYCHO, but the over-the-top exploitation version and that’s what star Spinell and Lustig are trying to craft here. Spinell plays Frank Zito, haunted by memories of his abusive dead mother. Instead of going to therapy, he opts for a rampage throughout New York murdering young women, scalping them and then placing those scalps on mannequins throughout his apartment (the guy’s Norman Bates sick, but without the cheery demeanor).

The film ultimately takes a familiar detour when Frank falls for a pretty young photographer (played by genre babe Caroline Munro) who we think is curing him or making him more of a man and less of a maniac, but his hang-ups aren’t enough to set the psychopath on the right track.

It’s unsavory to say the least, but the film’s saving grace is not only a creepy performance by Spinell, but the occasionally inspired direction by Lustig who does a fine job at building very effective suspense sequences leading up to the kills. The subway chase is just as good as anything in a 1980s Brian De Palma film and the use of weird, surreal moments (particularly toward the end) also gives the film some nice flourishes to allow it to rise above merely being sleaze.

This is the uncensored version that also includes the infamous and excised “victims coming to life to kill Zito” ending which definitely gives the film an added sense of bizarro anarchy.

Then there’s the urban legend about the Michael Sembello song “Maniac” from FLASHDANCE being inspired by this movie. That rumor is clarified in a featurette called “Maniac Men” where Lustig visits songwriters Sembello and Dennis Martkosky to get the full scoop. It culminates in a hilarious rewrite of the song lyrics to fit closer to MANIAC with Sembello and Martosky performing it on an out-of-tune piano. Super cool stuff.

This two-disc set also includes archival footage of news reports in various major cities when MANIAC was initially released in 1981. Watching people over-react and freak out about MANIAC playing at their theaters is quite revelatory (also, it makes you wonder, whose brilliant idea was it to name their theater chain “Budco”). These news segments bring back memories of when every slasher movie was being attacked for being an affront to feminism and how Gene Siskel felt filmmakers were subtexurally saying that strong independent women should get back in their place or get brutally knifed! Ouch!

MANIAC is not the best slasher movie from the 1980s, but it has its moments and it certainly has its place in horror movie history as a major scapegoat for all that was considered wrong with the horror genre at the time. Ironically enough, the newscasts and prophets of doom got it all wrong. The slasher movies were not the end of civilization, and the subgenre eventually died down to be replaced by more surrealistic slashers in the later ‘80s like Freddy Krueger before disappearing completely until SCREAM re-vitalized the genre in the ‘90s.

Now these movies that were once derided, are perceived as modern-day classics and strangely are getting big-studio, big-budget remakes. It’s funny what a difference 30 years can make. It makes you wonder what Gene Siskel would think of a MANIAC remake in gut-busting, gore splattering 3-D. When Academy Award winning director Jonathan Demme was vying to helm PRIDE AND PREJUDICE AND ZOMBIES, we’ve definitely come a very long way, baby.

One of the most notorious slasher films of the 1980s was the William Lustig directed MANIAC – an unapologetic gore fest starring (and co-written by) Joe Spinell and featuring graphic gore effects by FX maestro Tom Savini.