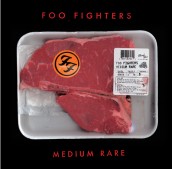 Essentially a compilation of various cover songs the Foo Fighters have done throughout their career (studio and live tracks), the release was a coveted item for collectors and is now netting as high as $60.00 from some unscrupulous resellers.

MEDIUM RARE really proves how versatile the band is as musicians and for David Grohl as a singer. In many ways, the songs are very faithful to the source material, with just a little bit of a heavy guitar kick to make it sound fresh.

Side 1 kicks off with the band’s previously released glorious rendition of Paul McCartney and Wings “Band on the Run.” It’s tight and well-produced (and a worthy cover, unlike the recent attempt by AMERICAN IDOL contestants on the show’s tenth season).

Cream, Thin Lizzy and Mose Allison are also represented on this side with Walsh’s “Life of Illusion” getting a nice sonic upgrade. The Thin Lizzy “Bad Reputation” cover feels like slightly more progressive Foo while Prince’s “Darling Nikki” rounds out side 1.

“Darling Nikki” is a fun re-interpretation by Grohl. He doesn’t have Prince’s high falsetto, and it does not come off as pop at all. The band has turned this into a pretty edgy rocker with Grohl’s vocals bringing a whole other level to this tune about self-pleasuring.

Side 2 of MEDIUM RARE kicks off with another strong track, Gary Numan’s “Down in the Park.” The Foos keep the early 1980’s synth driven vibe, again, tossing in their own heavy guitar licks to differentiate things.

Gerry Rafferty’s “Baker Street” is nicely done, and makes you appreciate that soft-rock song much more in this incarnation. Of all the Ramones songs to cover, “Danny Says” is a strange choice, but it’s nice to hear one of their deeper cuts attacked. “Danny Says” was on the softer, ‘60s influenced pop side of the Ramones tunes, and the Foos don’t tamper with perfection.

Another huge warhorse the band tackles is Pink Floyd with “Have a Cigar” (with simmering results) and Grohl sounds perfectly comfortable doing  the Hüsker Dü track “Never Talking To You Again.”

The album concludes with the one-two punch of  the under-a-minute cover of the Angry Samoans’ “Gas Chamber” and the Zombies “This Will Be Our Year” which lightens things up with the Foos creating a pseudo-Beatles vibe with this obscure track.

Foo Fighters really know how to show off their skills and it’s refreshing to see this alternate side to their persona so close on the heels of their formal new release. It’s a perfect collection that doesn’t rely on the familiar, and tries to dig a little deeper to be relevant.

The artwork for this record is also quite cool – looking a bit like packaged meat. It would have been nice to have a little more detail about the cover songs and where they came from, but at $16.99 (during Record Store Day), this was a bargain for those that discovered it.

Check out your local independent record store to find out if MEDIUM RARE is still available and CLICK HERE to see other releases from this year’s Record Store Day 2011.