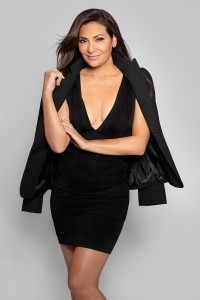 WITH LOVE, the new dramedy series on Amazon Prime Video, follows the Portland, Oregon-based Diaz family through five major holidays over a year. Created by Gloria Calderón Kellett (who was behind the ONE DAY AT A TIME reboot), we see adult Diaz siblings Lily (Emeraude Toubia) and Jorge Jr. (Mark Indelicato) navigate their love lives. Restauranteur dad Jorge Sr. (Benito Martinez) is content with everything the way it is.

Constance Marie plays mom Beatriz, who is in the throes of an initially quiet but growing midlife crisis. Marie, originally from Los Angeles, began her performing career as a dancer. She has a long resume of roles in films and as television regulars, including UNDONE, LAW & ORDER: TRUE CRIME, SWITCHED AT BIRTH, GEORGE LOPEZ (as the title character/star’s wife), AMERICAN FAMILY, EARLY EDITION, UNION SQUARE, SELENA, SANTA BARBARA, and the series version of DIRTY DANCING.

Speaking by phone, Marie talks about making WITH LOVE with, well, love.

ASSIGNMENT X: How did you get involved in WITH LOVE?

CONSTANCE MARIE: Well, I’ve known Gloria for some time. Our paths have crossed. She would be directing, or shadowing directors; I’ve auditioned for projects for her before. But this was during COVID, and everybody was still on Zoom, and doing phone interviews, and I read WITH LOVE. Because Gloria and I always said, “Yeah, someday we’ll work together, someday we’ll make it happen.” And then this came across my table, and I was like, “Oh, my God, this is so good, and it’s such a quality show, with so much heart, and it’s so funny, and it’s sexy, and it represents Latinx people in a positive light, and these wonderful characters, and I really want to be a part of it.” So, I auditioned. I got my Zoom thing all together, and it wasn’t hard – I felt like I already was this character, so I just sent my tape in, and they were like, “You are Beatriz, so let’s do this.” And I was just so happy. She looked at me when we first met, and she was like, “I told you, I told you it was going to happen.” [laughs] And it did.

AX: Do you have any contributions to or gotten to make suggestions about Beatriz?

MARIE: Yes. If something doesn’t feel right – Gloria trusts her actors, which is wonderful. She’s very open to collaboration. And I remember, there was this one time that something in what we had previously shot didn’t feel like it emotionally tracked for me, and she was like, “Well, what do you feel it would be, and what do you think it should be?” And she listened to my input, and it ultimately ended up on screen, so she’s really open that way.

AX: Gloria Calderón Kellett is actually in the show, as well as creating it …

MARIE: Yes. She plays my sister Gloria, the funny one, the single one. She’s forty-four, and ready for more.

AX: How was playing opposite your series creator as an actor? You obviously have prior experience with that, because you played opposite George Lopez on GEORGE LOPEZ for six years …

MARIE: Yes. But actually, what’s interesting is, when I did the scenes with [Calderón Kellett], she’s so disarming, and she’s so grounded and down to Earth. I mean, yes, she’s [the executive producer], an amazing writer, and created this whole thing just out of her imagination, she’s brilliant, and she’s worked with Norman Lear and did ONE DAY AT A TIME. But when she’s on the set, and we’re in the scene with her, she’s just a funny actress, just so quick on her feet, and we have such great chemistry. She made me laugh so much that I was [overcome] with laughter. It was not hard to pretend she was my feisty, funny sister. She just was the character.

AX: Does your background in dance come in handy in any way in your acting?

MARIE: Yes, because any time they need movement, I’m ready. And [each episode of] WITH LOVE takes place on a different holiday. So, we have some salsa music – Lin-Manuel Miranda wrote our Nochebuena, which is Christmas Eve, song, and it’s sung by Emily Estefan, Gloria Estefan’s daughter. So, yes, at all the gatherings, and the dancing everybody does, it does come in handy. And also, between scenes, we would be on set, and Benito Martinez, who plays my husband Jorge, likes to walk around with his own little private salsa theme music on all the time on his phone [laughs], so he and I would have these little dance breaks whenever we were in between scenes. 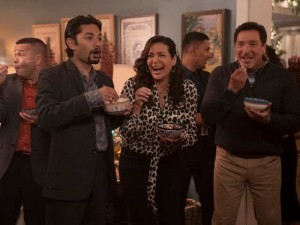 AX: Beatriz joins a jogging club, but you’re going kind of slowly. Did you want to jog faster?

MARIE: Oh, my God. First of all, I was an ex-break dancer, so my knees were not in great shape. And then, when we did the running club, we shot it outside, and there were these wild parrots that kept chiming in, in between takes. So, we had to do fifteen takes of us running on concrete, downhill, and we couldn’t run fast, because the dolly was moving in front of us. So, we had to run straight up and down.

It was two days of shooting running scenes, and after the first day, I didn’t feel it that day, but the next day, I couldn’t walk. My right knee was not having it [laughs]. So, I did want to run – it’s easier to run faster, because it’s a natural movement. But yeah, it did a little damage to me, so the next day, I was like, “I’ll take two steps, and then I’m walking slow.” And they were like, “Okay, just do what you can.” I’m not a runner, I don’t want to run fast, I don’t want to run at all, but I did it for Beatriz. And she was not supposed to be a great runner, so it worked perfectly, because I was not.

AX: Beatriz’s running partner is played by Brandon Routh. How was doing the scenes with him?

MARIE: Oh, my gosh. It was so fun. When I found out he was cast, I was like, “Oh, my God, I’m flirting with Superman [Routh played the role in the 2006 feature SUPERMAN RETURNS].” I’m like, “Benito, did you see who’s cast? He’s Superman.” And Benito was so funny. He goes, “You’re just going to tell me that every single day, every time you see me, aren’t you?” And I said, “Yes, I am.” [laughs]

AX: Did you get to sit down with Benito Martinez and talk about your characters’ relationship before you shot, or because of COVID, did you just get on set and go, “Hi there, we’re married”?

MARIE: Benito and I worked together on my very first movie, MY FAMILY/MI FAMILIA [1995], and what’s interesting is, we didn’t really have a scene together, but I felt like we really bonded on some level on that movie, and that was twenty-five years ago. And so, when I found out he was cast, and we had a table read, with face shields, and six feet distance. And before the table read, we talked, we did Zoom. And Gloria was really interested in us creating this community, creating this family.

Benito I think is the only one that I had worked with [previously], and Gloria I knew from seeing her passing by here and there on different projects. But somehow, through Zoom, we created this family. We were all so happy to be part of the project. I think the casting is brilliant, because there’s this collective, positive energy that we all have together. So, I did get a chance to meet them all through Zoom, and then through table reads, and then Benito and I instantly clicked. And Todd [Grinnell, who plays Dr. Miles Murphy, and Isis [King, who plays Beatriz’s transgender relative Sol Delgado] – everybody. We just have great chemistry. We kind of feel like a family. For the premiere, we [had] a Twitter watch party in our pajamas to watch it together at Gloria’s house. 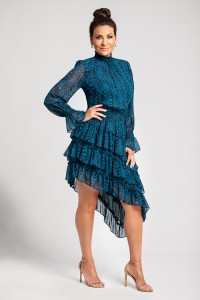 AX: How is it playing the mother of two adult kids?

MARIE: I’ve been really blessed to play a mother so many times. And Mark Indelicato and Emeraude Toubia are just wonderful, wonderful actors, and simultaneously, they can come up with deep emotion and also be hilarious, and I’m so proud to play their mom, because our scenes together were just wonderful. I can’t say enough good things about the two of them.

AX: WITH LOVE is set in Portland, Oregon. Do you actually shoot there?

MARIE: Oh, no. We shot it in Santa Clarita [just outside Los Angeles] in the summertime, which, in a face shield and hot winter clothing, in 105-degree heat [laughs], not optimal, but we made it work.

AX: Do you know why they chose to set WITH LOVE in Portland?

MARIE: Yes, because Gloria, the creator, is actually from Portland.

AX: Had you worked in Santa Clarita before?

MARIE: I don’t think so. I’ve shot in Santa Clarita before. I did five years on my series SWITCHED AT BIRTH with Lea Thompson and Marlee Matlin.

AX: That was a great show …

MARIE: It was wonderful. I love that show. I’m really blessed. I feel like, in my career, I’ve gotten a chance to work on projects that are really important. I mean, I’ve made a conscious effort to do that, and I know everybody might try it, but I’ve been really blessed that the opportunities have come, and I’ve gotten them, representing the Latinx community for the first time in a sitcom that ever made it over thirteen episodes for GEORGE LOPEZ, the first series with multiple deaf actors as a major part of the storyline on SWITCHED AT BIRTH, and now, WITH LOVE, the first Latinx romcom series. I’m really, really proud of my body of work.

AX: It seems like a lot of the work you do is family-oriented, whether it’s comedy or drama, or a blend of the two. Is that an element that’s important or satisfying to you in your work, or is that just where the work has been?

MARIE: I feel like it has to do with who I am. Even before I was a mother [in real life], I had played so many mothers. In the movie SELENA, I played Selena’s [played by Jennifer Lopez] mother. I must give off that vibe. And whenever there’s a mother involved, there’s a family involved. I remember people saying to me, “You’re going to make a really good mother someday.” And I always thought, “How do you know? I don’t even know if I want kids.” And they said, “We can just tell.” And I guess that’s just what I give off as a human. And now that I am a mom, it’s like gangbusters. Now I understand – you have to be simultaneously empathetic and bossy, and I think that’s kind of who I am. I don’t mind playing mothers. I think mothers are so important to the world. Sign me up. 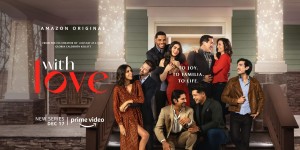 AX: How many children do you have in real life?

MARIE: I have one wonderful daughter.

AX: Does she come to set with you?

MARIE: Yes, she’s been coming to set. Actually, I did an episode of THE SECRET LIFE OF AN AMERICAN TEENAGER while she was in my belly, and the sitcom ACCORDING TO JIM while I was pregnant.

AX: So, she’s actually been on television, just well-concealed ….

MARIE: Yes, just before she was born.