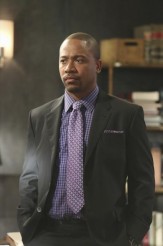 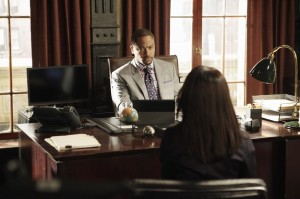 On SCANDAL, the Shonda Rhimes-created series in its second season Thursday nights at 10 on ABC, it seems like everybody is in a constant state of crisis. There are assassinations, election-rigging, adultery, lies, heartbreak, you name it. But then, Olivia Pope (Kerry Washington) of Washington,D.C.’s Pope & Associates is an expert fixer, so things in her world would be pretty intense even if she weren’t in an on-again/off-again affair with the married President of the United States (Tony Goldwyn).

Fortunately, Olivia has people on her team she can turn to, especially Columbus Short’s lawyer character Harrison Wright. Harrison used lies to break up a relationship between another colleague, Abby (Darby Stanchfield) and an outsider, so we know he places loyalty to Olivia above honesty. Of all the main characters on SCANDAL, we currently know the least about Harrison, so he could be said to be the show’s most mysterious figure at present.

Actor Short (STUDIO 60 ON THE SUNSET STRIP, QUARANTINE, THE LOSERS), a native of Kansas City, Mo., is as candid as he can be discussing his job on the spoiler-averse SCANDAL.

ASSIGNMENT X: How would you describe the relationship between Harrison and Olivia?

COLUMBUS SHORT: It’s one of those relationships where he would do anything for her. It’s like she is family, she’s one of my best friends, but she’s also – I don’t know. We [Short and Washington] talk about it, actually. It’s a very interesting relationship. It could be anything, but all I know is there bond is unbreakable.

AX: Olivia has done a few questionable things that – so far as we know – Harrison doesn’t know about. How do you think he’d react if he found out?

SHORT: I think that nothing would surprise Harrison. He knows Olivia so well –Harrison’s the least judgmental character, I believe. He’s the least likely to judge her, but it would be a shock that she kept it from him. I think he’d be bothered by that.

AX: So he wouldn’t be disillusioned, he’d just feel sad that she didn’t trust him with her secrets?

AX: When you first began work on SCANDAL, did you expect the storylines to become so arced?

SHORT: No. I had no lofty expectations, but I knew anything was possible. I’m just shocked and wildly glad and blessed to be a part of it, because I can’t believe it’s doing what it’s doing right now [in terms of popularity].

AX: Did you have to research anything or study anything in order to play Harrison?

SHORT: No. The previous work that I’ve done kind of prepared me to really just jump into this, so it wasn’t so much research, it was more trying to find out who he was personally.

AX: In what we’ve seen so far, what’s been the most surprising plot development for you?

SHORT: There have been a lot. I knew [Olivia] was a part of [the election rigging] somehow. I think the shocker for me was Verna [Debra Mooney] so easily turning on Olivia. It’s kind of rough, turning on her and selling her down the river. That was a shock.

AX: A lot of the characters on SCANDAL have gone through huge revelations and reversals, but Harrison hasn’t changed much.

AX: Do you like getting to play that consistency or do you hope he’ll turn out to have some extraordinary secret?

SHORT: Yeah, exactly that. The latter. I feel like there’s a quiet storm brewing, and when it blows, it’s going to blow. That’s all I can say.

SHORT: No, this is my life right now. This is my hundred percent life, Harrison Wright.

AX: Do you have anything else you’d like to say about SCANDAL?

SHORT: [People] need to just watch it. Keep watching it and it’s going to keep surprising.