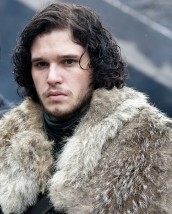 A good episode that is intriguing, despite being more set-up than main event

“Lord Snow” is a set of strong scenes that lead up to big events in the future. Nothing too huge or dramatic happens here – sure, there’s a pregnancy and a grim diagnosis, but nothing on the scale of the first two GAME OF THRONES episodes. No matter – we can bet there’s epic conflict to come.

As the title of “Lord Snow” suggests, we spend a fair amount of time with Jon Snow (Kit Harington), bastard son of Lord Eddard “Ned” Stark (Sean Bean), as he settles in as a member of the Night’s Watch along the Wall. The other young Night’s Watch men resent Jon for his superior attitude and his perceived advantages in life – at one point, visiting noble Lord Tyrion Lannister (Peter Dinklage) has to step in to save Jon from a beating.

Back at the Stark stronghold Winterfell, young Bran (Isaac Hempstead-Wright) has awakened from his coma after falling from a wall. Bran is diagnosed as crippled for life doesn’t seem to remember he was actually pushed by Jaime Lannister (Nicolaj Coster-Waldau), brother of Queen Cersei (Lena Headey) after Bran caught the siblings having sex with one another.

Back at court in King’s Landing, Cersei frets that Bran may regain his memory, but Jaime reassures her. Cersei counsels her son Crown Prince Joffrey (Jack Gleeson) that everyone who isn’t them is an enemy, but to be patient and stealthy in his battles. Ned, who has reluctantly accepted his post as the new Hand of the King, is appalled to learn the King Robert (Mark Addy) is deeply in debt. Ned’s wife Cat (Michelle Fairley) sneaks into the capital to warn her husband that she is sure the Lannisters are behind Bran’s injury (though she mistakenly thinks Tyrion rather than Jaime is responsible), then leaves again, with an old suitor knowing too much about the Stark family secrets. Ned arranges for sword-fighting lessons for his fierce younger daughter Arya (Maisie Williams).

Meanwhile, Daenerys (Emilia Clarke) is settling into her role as wife to the leader of the Dothraki raiders Khal Drogo (Jason Momoa). When her abusive brother Viserys (Harry Lloyd) attacks Daenerys for being disrespectful to him – he plans to take Robert’s throne – Viserys gets a painful albeit non-lethal lesson about putting hands on his Khalisi sister. It turns out that Daenerys is pregnant by Drogo, which pleases both spouses.

There are lots of warnings and portents in this episode, particularly Jaime’s recollection that Robert’s royal predecessor (whom Jaime killed) said for hours before his death, “Burn them all.” This sounds pretty ominous, even if we can’t tell what it refers to yet. Viserys is such a noxious character that we can’t help but be pleased to see him get a bit of a walloping – it’s only regrettable that Daenerys doesn’t do the honors herself. It’s also charming to see the father-daughter bond between Ned and Arya, with Bean and Williams convincingly playing familial love.

Dinklage once again provides humor and humanity as the flippant but thoughtful Tyrion and the multiple fights are staged with gusto. The Wall is an especially interesting environment, hinting at some supernatural horrors to come, even though they are only spoken of rather than seen this time around.

The court intrigue, with Ned and Jaime circling each other, Robert verbally poking his brother-in-law and the like, is well-written and well-acted, as well as doubtless necessary for the coherence of what follows. However, it lacks the visceral punch of the previous two episodes.

“Lord Snow” isn’t the best episode so far of GAME OF THRONES, but it’s still hilt and pommel above most other shows.