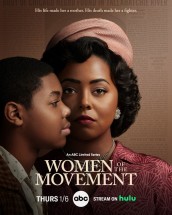 WOMEN OF THE MOVEMENT: The scoop on the new ABC docudrama series – Interview

WOMEN OF THE MOVEMENT is a limited anthology series on ABC, exploring women in the civil rights movement in the United States. The first season, airing on Thursdays beginning January 6 (with episodes available the next day on Hulu), dramatizes the events leading up to and following the 1955 hate-crime killing of fourteen-year-old Black youth Emmett Till. Till was lynched by racists who felt that the young man had been insufficiently deferential to a white woman store clerk. Till’s mother, Mamie Carthan Till-Mobley, tirelessly tried to get some measure of justice in the aftermath of her son’s murder.

Before the questions start, Emmett Till’s cousin, the Reverend Wheeler Parker, and the Reverend’s wife, Dr. Marvel Parker, make some opening statements. Both serve as story consultants on WOMEN OF THE MOVEMENT. Reverend Parker observes, “Although the Emmett and Mamie Till story is not a pleasant story, it needs to be told over and over again just to remind us of American history, showing how far we’ve come and how much work we have to do.”

Dr. Parker adds that she has been by the Reverend’s side for fifty-four years. “I have shared his grief in the loss of his best friend, Emmett Till, and observed his anguish as others embellish the story and misrepresent Emmett …  We are happy that the story is being told truthfully.”

Cerar explains that the first season of WOMEN OF THE MOVEMENT is entirely devoted to Emmett Till and Mamie Till-Mobley. She adds that we will see much more of Till than just the horrific facts surrounding his killing. In Episode 1, [we] set up the family and the life and the people, and we are absolutely intentionally humanity‑forward. We wanted the first episode to really tell you who these people are and to sit and have dinner with them before we see the tragedy.” 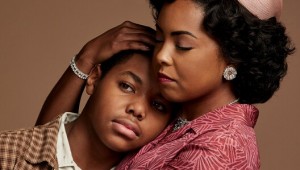 It is pointed out that many people’s knowledge of Till centers around two photographs, one when he is alive and smiling, the other of his battered body in his coffin.

Cerar replies, “is why I wanted to tell the story, because of the limited knowledge. We just had a picture of a smiling boy and then a brutalized boy, and we had all of these stories, rumors, myths, and I wanted to know, who was he? It was really important to me that we did not begin the series with a dead body. I did not want to be that show. I wanted to begin with birth because I wanted the audience to see their brother, their cousin, their neighbor, their child’s friend at school, their student, the little boy who walks into the corner store … I didn’t want them to see a victim in a body bag because that’s what we see too frequently in the news … I wanted this to be a family drama that happens to be about a true crime.  And, so, I just wanted to do as much research as I possibly could, watch every interview, read every transcript, do everything I could to learn about who Emmett Till was and do my best in putting that on the page and bringing it to life and then giving it to our beloved Cedric Joe to interpret, show us the boy.”

Pinkins elaborates, “I’d just like to add to that that there are people who are still alive, who were alive at the time of Emmett’s murder. Life Magazine was one of the biggest international publications, and so there was another image that was in Life Magazine that went around the world, and that picture was of Emmett as, like, a dog or an animal, as a naked being crawling on the ground with hair that didn’t even look human. So, getting to know Emmett with Cedric Joe singing and swimming to remind you that this was a human being, a child who was loved. I think that Marissa really captured that.”

Cerar adds, “It was really important to me that we state his age in every episode because … even in court, they refer to him as a man.  It was a strategy.  Emmett had just turned fourteen before he went to Mississippi to visit family [and was murdered there], and that was so important that we cast someone the appropriate age and that we constantly remind the audience and the world that he was a fourteen‑year‑old boy.”

Actor Joe says that he didn’t know much about Emmett Till as a living person before working on WOMEN OF THE MOVEMENT. “We got to see more of who Mamie and Emmett were as people and not just a story that we were told. So that was something big for me.”

Warren feels that, in portraying a historical figure like Mamie Till-Mobley, “There’s so much responsibility in telling stories of people that are here, especially our ancestors, those that have passed on, and this history is our history. This history is my history. It is an honor to have the opportunity to tell their stories in the best way that I possibly can, and for me, that is erasing myself from this narrative and putting them forward and doing my best to tell their story and to honor them as much as I can. There is a lot of research that is involved … Sometimes there is a physical transformation … It is literally taking every part of being a storyteller and learning as much as you possibly can about the human being, who they are, not who people perceive them to be, but who they are and presenting that in a way that is as truthful as possible as an actress because you want people to see the humanity in the people that I portray.”

The actors agree that filming in places connected to Till’s life and death contributed to both the production and to their understanding of the subject.

Warren observes, “Feeling the dirt that they felt under our feet, seeing and being in some of the buildings that they were in, feeling the ancestors with you, feeling the tension in the environment, in the air, that is still there. Not much has changed since 1955 … You can feel the gravity of that, which just takes everything that we are doing and elevates it in a way that makes this piece so unbelievably important because it’s about education. This is about informing those who may not have known before so that we don’t continue to perpetuate these cycles that we are doing, just hurting one another, which is hurting young people, which is hurting mothers, which is hurting humanity.”

Fisher relates, “Being on location in both Tennessee and Mississippi, where we shot a lot of this stuff, a lot of the folks who were playing in our background … were local to the area. And there were some scenes in the piece that have a lot of white folk in them. And, so, these people, in some ways, may be descendants of some of these folks who may have been involved in what you are talking about from the 1950s … So, to have people be able to come together for this project, I’ve got to say … across the board, it was nothing but love from everybody creating this thing. I think everybody understood that the story that we are there to tell is much bigger than any one of us, and, in fact, it might be bigger than all of us. And, so, I think it was really a rally, and that was a really inspiring thing to witness because you don’t know what you are going to get into when you are going down to the deep South to tell a story that some people may not want told and telling it in a way that some people may not want it told. … I was fortunate and felt blessed that we’ve had the sort of camaraderie that we did.”

Turman, himself the subject of the upcoming documentary THE LEGEND OF GLYNN TURMAN, notes, “The fact that there were people who were part of the cast as extras, who would come up to us and me and say, ‘I knew so and so,’ or ‘I was there when such and such,’ or ‘My brother,’ or ‘My sister went to school with …’ So that the humanity that comes with digging up this story and putting it in a proper perspective, for me, one of the monumental points is right now, having been introduced by the Parkers, who are related to the family, and to know that they are with us in the telling of this story and that they feel okay with what we brought to the table because that was my concern. … Will we tell the story that the family feels best represents them?  So, by them just being here and introducing us means that we must have done okay.”

Pinkins adds that it was important to keep an upbeat environment off-camera. “We were all in Mississippi, sharing a hotel together and having fun and trying to shake off the day’s work. We have to bring a lot of joy and laughter when you do stories that go this dark and deep.”

Cerar says that she doesn’t feel any dramatic embellishment was necessary in this season of WOMEN OF THE MOVEMENT. “The truth is we didn’t have to change anything. What happened is still happening. Literally, while I was writing the finale, it was the summer of George Floyd, and so it’s still happening. The portrayal of young Black boys and men is still the same [with reporting on their murders often] criminalizing victims. And, so, we just told the story, and the audience will come to their own conclusions; but unfortunately, we are still experiencing the same injustice and trauma.”

Turman provides additional perspective. “Unfortunately, this story is so spot on … In 1955, a young lady by the name of Mamie Till‑Mobley sought justice for her son. On November 24th, that young lady, Mamie Mobley, would have been one hundred … On November 24th [2021], that same day, [fatal hate crime victim] Ahmaud Arbery found justice. His mother found justice for her son, finally. All of these many years later, justice was accomplished for her seeking justice for her son on the birthday of Mamie Till‑Mobley. There’s some kind of poetic justice in that, but it just also lets you know how the more things change, the more they stay the same. So, no, we didn’t have to go find anything. We are in that world.”