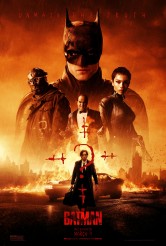 A film noir with action sequences and DC characters 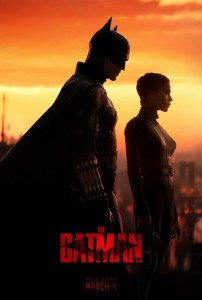 THE BATMAN is not the longest superhero movie ever made. However, at two hours and fifty-five minutes, it’s a contender for the longest movie made about a lone superhero. (The AVENGERS movies and JUSTICE LEAGUE were about groups.)

What’s surprising about THE BATMAN isn’t so much its length or even its plot, but rather its overall tone. Previous Batman movies have had noir elements. THE BATMAN feels more like film noir with Batman elements.

In THE BATMAN, it’s been twenty years since the murder of Thomas and Martha Wayne, and two years since their son Bruce (Robert Pattinson) put on the cowl and cape in order to strike fear into the hearts of Gotham City’s criminals. As Batman/Bruce tells us in voiceover (wisely used sparingly), he can’t be everywhere at once. Such is his reputation, though, that muggers and robbers think the Batman might be anywhere, which at least gives them pause.

Batman often works with Gotham City Police Department Lt. James Gordon (Jeffrey Wright), who trusts the vigilante, even without knowing his identity. When Gotham City’s mayor is found murdered on Halloween night, the twentieth anniversary of the murder of Bruce Wayne’s parents, Batman naturally looks into it. But even he is surprised to find a greeting card at the crime scene, addressed to “The Batman.” Inside the card is a riddle in the form of a cipher.

At the same time, a cat burglar by the name of Selina Kyle (Zoë Kravitz) is conducting an investigation of her own. This leads her to repeatedly cross paths with Batman.

Director Matt Reeves and his co-screenwriter Peter Craig deal with what most of us think of as normal Batman dilemmas: the difference between justice and vengeance, how much violence is justifiable in pursuit of keeping the larger peace, whether it’s possible to be Batman and still have human emotions.

Pattinson is fine with Bruce/Batman’s moroseness and rage (this Batman is a little too young to brood). As THE BATMAN’s Bruce Wayne is known to be a recluse, there’s no tycoon/man about town aspect to the character; the film’s overall manner doesn’t make room for it. Paul Dano has fun with his bright-eyed psychopath. Kravitz has conviction as the driven Kyle (though arguably not enough is made of the character’s stated love of cats), Wright projects enormous integrity and capability as Gordon. Andy Serkis is tough and endearing as Alfred. John Turturro is smooth as silk as Gotham’s top crime lord Carmine Falcone. To spare viewers from having to wonder through the entirety of the film who on Earth is playing Penguin under a transformative makeup job, that’s Colin Farrell.

Speaking of the makeup, Farrell is given a relatively pointy but realistic-looking nose, and a hefty, slightly scarred but otherwise normal face. Apart from the Batsuit, nobody wears anything that looks like superhero/supervillain togs. Likewise, there are no fantasy flourishes to the storytelling.

Other than (again) from the Batsuit and Batman’s relationship with the law, everything that happens in THE BATMAN is no more outlandish than what happens in a non-genre actioner. The action sequences are big and impressive and often work up some suspense. The main bad guy’s murderous tactics are on par with those in SE7EN, but they are hardly otherworldly.

THE BATMAN doesn’t rely overmuch on gadgets. Sure, Batman has his usually assortment of wires and grappling hooks, but he relies mainly on his fighting skills. On the flip side, this may be the most heavily body-armored Batman yet. The Batsuit looks so heavy that we wonder how he can walk in it, let alone fight. We wonder even more at the intelligence of criminals who try to shoot at Batman; it looks as though it would be like shooting at a tank.

Reeves opts for a futuristic retro feel, and cinematographer Greig Fraser and production designer James Chinlund tie the look together. In this world, we’re comfortable with the existence of both two-way contact lenses and rotary phones. It’s usually nighttime and raining, unless there is billowing fog.

So, to recap, THE BATMAN is a Batman movie. Still, it invites you to imagine what, say, L.A. CONFIDENTIAL might have been like if it hadn’t been so era-specific, and if Russell Crowe’s character had access to a Batsuit.