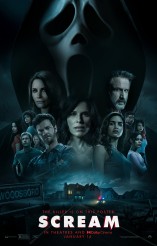 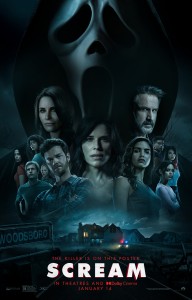 SCREAM tries in many ways to be confusing. This isn’t just because the new 2022 release is titled SCREAM, just like the 1996 original, with no numeral in the title, even though this is effectively SCREAM 5. As always, the filmmakers want to keep us on our toes, moving the players around like pieces in a shell game, so we’re trying to remember who is where, armed with what, and whether they have an alibi for an attack.

For those who need a quick refresher, SCREAM 2 was in 1997, SCREAM 3 was in 2000, and the most recent, SCREAM 4, was in 2011. All of the previous SCREAMS were directed by the late Wes Craven, and all but SCREAM 3 were written by Kevin Williamson, who serves as an executive producer here.

The new SCREAM is directed by Matt Bettinelli-Olpin & Tyler Gillett, and scripted by James Vanderbilt & Guy Busick. They are trying to be original, but not too original, and they would very much like us to know that they know that we know what they’re going for.

How do we know that they know that we know? Well, ever since SCREAM 2, there has been a film franchise within the SCREAM universe called STAB. This allows the characters and the filmmakers to comment on the SCREAM movies.

The meta commentary in the new film will bring any casual viewers up to speed. However, there is so much of it that there are moments when SCREAM threatens to go from being a motion picture to a protracted Twitter argument with visuals. We understand the filmmakers have big shoes to fill, and again, they want us to know that they are well aware of this and are going about it with the greatest respect, but there’s only so much deflection of anticipated criticism an audience can take.

On the other hand, complaining about self-reference in a SCREAM movie is a little like complaining about coffee, Slushies and chips in a 7-11. Self-reference, and reference to other horror films in general, is what distinguishes this cohort of slashers from others in the subgenre. The makers of the current SCREAM are actually pretty smart about it.

To give the set-up in a non-spoilery fashion, it is fair to say that SCREAM, like its predecessors, takes place in suburban Woodsboro, California. There are new protagonists this time out, a mixture of teens and twenty-somethings. Some of them are played by Melissa Barrera (of IN THE HEIGHTS and VIDA), Jenna Ortega, Jack Quaid, Dylan Minnette, Jasmin Savoy Brown, Sonia Ammar, Mikey Madison, and Mason Gooding.

Since they appear prominently in the posters and advertising, it can also be stated that SCREAM stalwarts Neve Campbell (as Sydney Prescott), Courteney Cox (as Gale Weathers), and David Arquette (as Dewey Riley) are also on hand. Their characters become involved when Woodsboro is once more stalked by a knife-wielding killer in black robes and a mask.

There are definite highlights here, including a moment of startling emotional potency. The franchise veterans all commit to their roles and the newcomers are all on target. Several truly get into the spirit of things, but to single them out might be to tease too much. Let’s just say that one of them gets a genuinely great and well-placed line.

For those who have enjoyed the SCREAM movies so far, this fills the bill fair and square. For those who’ve never seen one before, it seems like it should be easy enough to jump on board here. For those who have seen any of the previous movies and disliked them, it’s hard to imagine what they’d be doing watching this in the first place.