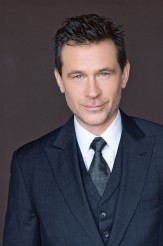 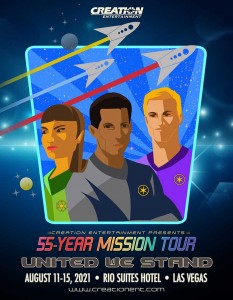 STAR TREK is celebrating its fifty-fifth birthday this year. To celebrate, Creation Entertainment – which itself is turning fifty – is throwing a five-day convention at the Rio Hotel in Las Vegas, August 11-15. There will be over one hundred guests, including William Shatner, George Takei, Walter Koenig, Jeri Ryan, Kelsey Grammer, Shohreh Agdashloo, and Brent Spiner. There will be COVID protocols in place; for further details, go to creationent.com.

Among the panelists is Connor Trinneer, who played Commander Charles “Trip” Tucker for four seasons, 2001-2005, on STAR TREK: ENTERPRISE. Since then, the actor from Washington State has had arcs on STARGATE: ATLANTIS and (as a different character) STARGATE: ORIGINS, as well as AMERICAN ODYSSEY, RILEY PARRA, 9-1-1, and a leading role in Season 2 of THE PURGE. Trinneer’s feature work includes UNBELIEVABLE!!!, DARK HARBOR, and a portrayal of ‘70s-era George W. Bush in AMERICAN MADE.

Trinneer gets on the phone for an exclusive talk about the legacy of STAR TREK, plus portraying a real-life public figure.

ASSIGNMENT X: When you were working on STAR TREK: ENTERPRISE, were you thinking, “Someday, STAR TREK will be fifty-five years old, and there will be a celebration”?

CONNOR TRINNEER: At the time, it didn’t cross my mind, but I’m certainly happy that it’s here, and that the lifespan of the franchise just continues to go.

AX: How did you feel when, after a five-year gap following the end of STAR TREK: ENTERPRISE, they started making more STAR TREK movies, and the CBS All-Access – now Paramount+ – launched a bunch of new series?

TRINNEER: I wasn’t surprised at all. I think that the longevity of STAR TREK is well-proven. And I was happy to see that they’re putting different STAR TREK crew/ship-based series out, things like STAR TREK: PICARD. I just think it’s great.

AX: How have you enjoyed working on the convention circuit? I mean, again, when you became an actor, were you thinking, “And someday, I will have fans, and this is what the interactions will be like”? Did you think about that at all, and if you did, has it been what you expected?

TRINNEER: Oh, that never dawned on me when I started out professionally. It’s just been a gift that keeps on giving. My history with conventions – my first one, of course, I was quite nervous for, but the fans were so open and giving and supportive. And then as it progressed, I really enjoy them. I think that the opportunity to be face to face with fans that attend the conventions – I’ve met some people who became dear friends, I’ve met some people that I’ve seen over and over again, I’ve gotten to travel the world, and gosh, even listing those few things, how could you not love them? 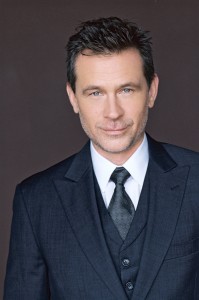 To be quite honest, during this last year and a half, when we’ve been unable to have them, while we’ve had virtual conventions, that’s not really the same. It’s just nice to have the interactions with people, not only to discuss STAR TREK, but to discuss each other’s lives, and to find out what people do, and what they’re up to.  I get a lot out of them.

AX: When people talk to you about your STAR TREK: ENTERPRISE character Trip, what do they usually want to know?

TRINNEER: Well, the first thing is almost always that they’re either upset or wish that he hadn’t died in the finale. They often wonder what he would be doing if he hadn’t been killed off. Usually, when we wind up talking about the character, they speak of their affinity for him, and their fondness for the character.

AX: Are you excited about doing an in-person convention again with this fifty-fifth anniversary? Are you concerned at all because of the COVID variants?

TRINNEER: Yeah, I’m a little concerned. I’m also excited. I personally feel like we need to carefully begin to get on with our lives, and I believe in vaccination. I think we need to figure out the best, safest ways in which we can carry on, and not feel that sense of being locked down. It’s difficult.

AX: Are there other panelists who you are looking forward to meeting, who you haven’t met before?

AX: Since you’ve been involved in a couple of different iterations of STARGATE, do you also do STARGATE conventions?

TRINNEER: I do. There are less of those, but sometimes I’m brought on.

AX: Are there PURGE conventions? Would you want to go to those if there were?

TRINNEER: Those would be interesting. Yeah. I would go to those. Typically, conventions that are horror-specific [don’t include STAR TREK/STARGATE] the genre, but yeah, absolutely, I’d go.

TRINNER: I thought the second season in particular was, not as a result of me being in it, but exploring the year in between [Purge nights] was an interesting take on it.

AX: You played George Bush in the 2017 movie AMERICAN MADE, which starred Tom Cruise as real-life pilot Barry Seal. When you’re playing a real living person, do you have to approach that differently than you would playing a fictional person?

TRINNEER: Yeah. You have to do a lot more external research, especially when you’re playing someone as visible as he has been, as well as that people have real specific notions about.

AX: What was the most important thing you learned in order to play Bush?

TRINNEER: Well, when I first was doing the research, the most obvious thing that began to show up on YouTube were the comics’ take on him, a lot of Will Ferrell coming to mind immediately. They are caricatures of him. I did a bit more of a deep dive, and I found that when he would go visit a town, he would walk neighborhoods, and just talk to people, so you could really get a sense of him in his natural environment. What I mean by that is, whenever you saw him at a lectern, that was just a thing, when he was speaking from a teleprompter. You wanted to catch the essence of the guy. So, that was the most useful research to me. There’s nothing I can do about how physically close to him I am in the way that he looked, but I just wanted to get his voice right and his physicality right. And those were two things that I focused on.

AX: And what else, that you’re allowed to talk about, have you been working on lately?

TRINNEER: This summer, I shot a movie called THE WEDDING PACT that will be coming out, I think, in the fall. I am about to start a movie that I have signed an NDA for that I can’t talk about. So, I try to keep busy. I’ve been fortunate to be able to do [unint.] from my home during the pandemic. But production has ramped back up, and everybody’s being very careful, and in fact, I start shooting this coming Monday, and then head off to Vegas later in the week.

AX: And do you feel any sense of momentousness about STAR TREK reaching fifty-five and that it’s being celebrated, just in terms of the social impact of the show, and that it has not ceased to be relevant in all that time?

TRINNEER: Oh, I’m awfully proud of being part of the legacy of it, and its message, and I think STAR TREK has always been a bit more than just entertainment or a TV show. I think the reason that it’s lasted as long as it has is because of its message of exploring our humanity and our humanness resonates with people. I think STAR TREK exposes that we’re all fallible, but when you make your best, honest effort, and have a code of honor, and you show that, that that’s a wonderful message for people to hear and see, and it resonates, and has resonated more so in the recent past than maybe it did than even when I was doing it. That was during a different time. 9/11 had just happened [when STAR TREK: ENTERPRISE began]. I think its message is important, and needed, always.