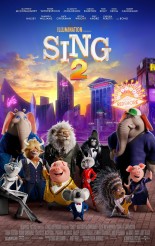 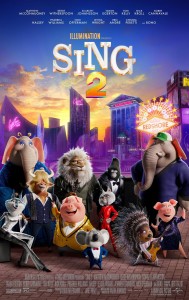 SING 2 is a sequel to 2016’s animated musical SING. Like the first film, SING 2 is written and directed by Garth Jennings. Both take place in a world of anthropomorphic animals, and both are jukebox musicals, with songs taken from pop culture rather than being composed specifically for the film.

In SING 2, Buster has created a stage musical for his troupe, which is hugely popular in their small town. From the brief glimpse we get of it, the show is imaginative and charming.

But Buster has his eye on big-city success. He is determined to get a shot with wolfish mega-producer Mr. Crystal (voiced by Bobby Cannavale). Crystal won’t even hear Buster out on the premise of his earlier stage show. Gunther blurts out his own pitch for a science-fiction musical. Due to a misunderstanding, Buster winds up having to promise that not only will the show be on its feet in three weeks, but it will also feature and have music by now-reclusive rock star Clay Calloway (voiced by Bono, of U2).

We can more or less guess how all this will go from here, and it does. The voice cast is talented, and the animation is mostly impressive. There are a few supporting characters that have too-human physiques, which are mainly noticeable because most of the animals around them are so well-realized.

The most interesting aspects of SING 2 are actually meta. For one thing, the movie appears to be a parody of the backstage goings-on of the legendarily problematic Broadway production of SPIDER-MAN: TURN OFF THE DARK.

It’s hard to tell if the parallels are intentional or coincidental. Certainly, most of SING 2’s target audience won’t be aware of them. Since SING 2 doesn’t seem like it wants to land on sending up professionals who are overwhelmed by something that explodes out of control, or playfully tweak amateurs with toys that are too big for them, it doesn’t really matter. Either way, most of the showbiz jokes are aimed at the middle distance. They’re not pointed enough to draw blood, but not universal enough to be generally funny.

This takes us to another, larger issue with SING 2. Buster and Company start out with what looks like (from the bit we see of it) a deservedly successful stage production. True, Buster would like to keep it, but when Crystal demands he jettison it in favor of throwing together something new, Buster has no qualms about what he’s leaving behind.

Well, yes, the songs for Buster’s new musical are fine (being standards in our real world), and they’re powerfully performed by a great voice cast. But the new musical itself sounds, well, bad in both premise and in the non-musical segments we are shown.

There’s a major plot pivot because one character delivers her stage dialogue unconvincingly. True, the character clearly doesn’t even understand what she’s saying, but since it’s doubtful that even Helen Mirren could make the speech work, this rather undercuts what we’re supposed to get out of the moment.

SING 2 is ultimately about a stage production full of wonderful songs and agreeable spectacle, with a script that feels like it gets only enough attention to provide connecting tissue for the big numbers. In this respect, the film and its story are fairly in synch.