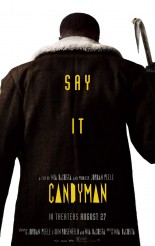 A sequel that improves upon a powerful original 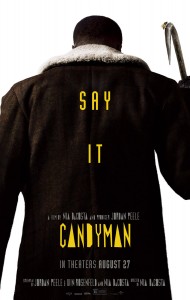 CANDYMAN is being billed as “a spiritual sequel” to the 1992 feature film of the same name. Since that was set in Chicago’s Cabrini-Green housing projects, and the new movie is set in the upscale apartment complexes occupying the same area, and since this is both shown and discussed at the top of this CANDYMAN, it’s not too spoilery to note that this is a literal sequel as well.

Director/cowriter Nia DaCosta uses this to her advantage. Even more than its predecessor, the current CANDYMAN is interested at the intersection of true history and cultural mythology. One doesn’t have to know the first film to understand what’s happening here, though it deepens the appreciation.

The Cabrini-Green housing projects were real, apartment blocks where the residents lived in extreme poverty, walking distance from the rich. Eventually (post-1992 CANDYMAN) Cabrini-Green was torn down to make way for gentrification.

A prologue set in 1977 introduces us to a little boy who has the heck scared out of him in a Cabrini-Green laundry room. Jump forward to the present.

Not exactly on the site of that laundry room (though we’ll revisit it later), we’re in a nearby high-end apartment. Rising artist Anthony McCoy (Yahya Abdul-Mateen II) and art gallery curator Brianna Cartwright (Teyonah Parris) live together. She pays the bills while waiting for him to break big.

Brianna’s realtor brother Troy (Nathan Stewart-Jarrett) and his newish husband Grady (Kyle Kaminsky) come over for supper. Troy regales the intrigued Tony and Grady, and the resistant Brianna, with a tale of local lore that combines horror and madness. It’s not exactly the version of Candyman we know – that will come later – but it ignites Tony’s imagination.

Inspired, Tony starts to do research as he paints up a storm. He ignores an infection from a bee sting on his hand.

DaCosta has a trippy, immersive visual style that sometimes gives us a literally upside-down view of the environment. She often uses black-and-white cutout animation, by artist Kara Walker, to accompany exposition. While there is gore, DaCosta is also interested in what the kills look like from unexpected perspectives, such as what a passerby might witness at just the right moment.

The screenwriters – DaCosta, Jordan Peele (also an executive producer here) and Win Rosenfeld – come up with a backstory that, in terms of how legends evolve and grow, makes a great deal of sense. They also give us some characters who blessedly (and humorously) know when to leave well enough alone.

Abdul-Mateen gives a powerful performance that mixes exuberance and anguish. Parris is a lot of fun and invites empathy as the primary audience surrogate. Colman Domingo stands out as a neighborhood old-timer who knows a lot, but not everything.

This CANDYMAN is artful in every sense of the word, playing with imagery that might have come straight from Clive Barker, author of the original short story “The Forbidden,” which is the basis for the franchise.

Controversy has erupted over the new CANDYMAN even before its release, with some people complaining that it’s too didactic, or doesn’t come up with ways of addressing a nexus of sanctioned brutality against Black people and the supernatural. First of all, this is a combination that is still not seen all that often; second, since the former is a continuing real-world issue, it would seem to merit all the attention it can get.

The filmmakers anticipate this complaint in a bit with an art critic (Rebecca Spence) directing a “get over it” spiel at Tony’s paintings. This kind of meta-defense within a movie can backfire when it’s strictly about work (not everybody is going to agree on the nature of comedy, or what constitutes heroism), but here it feels very justified.

Barker’s “The Forbidden” didn’t deal with race, racial violence, or gentrification. Bernard Rose’s 1992 CANDYMAN brought these topics to bear, but from the perspective of a character who is a curious outsider.

In DaCosta’s CANDYMAN, the protagonists’ lives are impacted by all sides of the equation. Here, there is world enough for people to assert their sanity and their agency, or be swept up in potent legend. The movie deserves applause for this alone. That it’s also engaging, handsome, immersive storytelling is a big bonus.