The creator and executive producer talks about the fact-based drama 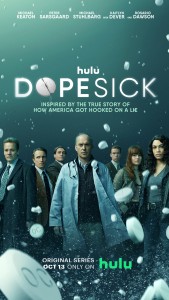 Danny Strong created, is an executive producer on, and directed the final two episodes of DOPESICK. Born in Manhattan Beach, California, Strong is an Emmy winner as both writer and co-executive producer of the 2012 HBO telefilm GAME CHANGE, about Sarah Palin’s campaign to become Vice- President of the United States. Strong was also nominated for his first teleplay, RECOUNT, about the 2020 election. Additionally, Strong wrote the screenplay for LEE DANIELS’ THE BUTLER, co-created and executive-produced (with Daniels) the Fox series EMPIRE, and wrote and directed the 2017 J.D. Salinger biopic REBEL IN THE RYE.

Strong began as an actor, and still accepts roles between writing/directing/producing gigs. Some of his better-known performances have been on BUFFY THE VAMPIRE SLAYER, THE GILMORE GIRLS, MAD MEN, JUSTIFIED, and BILLIONS. Strong recently appeared in Disney+’s miniseries THE RIGHT STUFF, which stars DOPESICK’s McDorman.

Speaking by Zoom, Strong talks about his work on DOPESICK.

ASSIGNMENT X: How much did you know about the subject matter of DOPESICK – the effects of Oxycontin and the extraordinary steps Purdue Pharma and its owners, the Sackler family, took to push it – before you decided to do a project about it, and how much did you learn once you became involved?

DANNY STRONG: Well, I didn’t know a ton about it. I had read this incredible 2017 New Yorker article by Patrick Radden Keefe that kind of blew this story up in the national consciousness. And in Esquire Magazine, there was another story, right around the same time. And it sparked so much anti-Sackler backlash, it really framed this crisis as, they were the ones who were responsible for it. So, when John Goldwyn [one of Strong’s fellow DOPESICK executive producers], came to me with the project, I started researching it, and lo and behold, by 2018, there were multiple books written on it, and so, I started reading some of these books, and they blew my mind. The facts of the case are so shocking. I couldn’t believe the criminal behavior of Purdue, what they did, what they got away with, so pathologically dishonest, and over a dangerous narcotic. It just seemed like a horrifying story, and I just thought, “I’ve got to do this, I’ve got to figure out a way to make this work.” 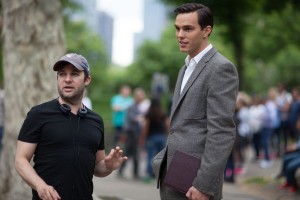 AX: In doing research for DOPESICK, what were some of the more dramatic facts you learned?

STRONG: Well, so many of the details of the manipulation, from the slogans that were false – “less than one percent of people get addicted,” and that there was this warning label by the FDA that said that this drug, Oxycontin, was less prone to abuse than other opioids, when in fact that wasn’t true, but that became this home-run marketing tool for Purdue and for the sales reps to pitch the drug to doctors, because it’s an FDA label. What’s more golden than that? And how there was just what felt to me like an overall giant, long con, in which [Purdue was] promoting rethinking the way opioids were used in this country, [incorrectly proclaiming] that opioids were safer. That leads to doctors writing articles in journals talking about “the miracle use” of opioids – “they’re much safer than previously thought.”

And then, right around the time Purdue Pharma gets their warning label that helps them promote the drug, you find out that doctors are on Purdue’s payroll. The guy who wrote the FDA warning label that was used for them to convince doctors the drug was safe, he quits the FDA, and he goes and he works for Purdue Pharma. All of a sudden, everything is connected to Purdue. And that sort of con, it never ends. It just keeps going and going and going, and it’s so diabolical. It’s also quite fascinating, for a company to be able to pull that off. And I thought, “Wow, if we could dramatize this, and show it, it could be hair-raising and really powerful.”

AX: Some of the characters, like Richard Sackler, played by Michael Stuhlbarg, and the U.S. Attorneys played by Peter Sarsgaard as Rick Mountcastle and John Hoogenakker as Randy Remseyer, are real people. Others, like the doctor played by Michael Keaton, and the young woman played by Kaitlyn Dever, are fictional. How did you decide which real people you were going to use, and what sorts of people needed to be composited or entirely dramatized?

STRONG: The real people that we were going to use laid themselves out in a sort of obvious way. I wanted the U.S. Attorney’s case in Western Virginia to be the spine of the story, because that’s an active investigation. So, let’s just use the real lawyers, the real prosecutors, and the real U.S. Attorney. When we’re in Purdue Pharma, let’s just use the Sackler family. How could we not use the Sackler family? It would be safer, but also ridiculous. I mean, the Sacklers are incredibly famous. We know that they’re the ones that micromanaged this company, including key employees at the company.

And then, the decision to do Finch Creek [the small town where Keaton and Dever’s characters live] as a series of composite characters, that came to me as this idea that, if I picked one or two true-life stories of addiction, I would be handcuffed to the events of that person, as opposed to, if the characters were composite characters, then I could not use just one set of stories, but I could take stories from so many different people, and put those into these characters. And it felt like, “Well, that’s actually going to be more truthful, and create a more universal experience, than if I just use one person’s story.” It also freed things up for me dramatically in ways that I thought could make this show more powerful and dynamic. So, for the most part, it’s true-life characters, but then, is there a place that more freedom with composite characters could actually create a more universal, truthful experience?

AX: I would imagine it helped that this especially helps with Michael Keaton’s Dr. Sam Finnix, who is privy to a wider range any single small-town doctor might normally be …

STRONG: Yeah, a hundred percent. Michael Keaton’s character is inspired by basically three different doctors, and I was able to take anecdotes from their experiences and put them all into this one character, and I think it was a powerful way to construct this show. I think it was absolutely the right way to do it.

AX: Your fellow DOPESICK executive producer Barry Levinson directed the first two episodes. Did he set the tone for the rest of the series, or was how he did it pretty much what you all agreed on at the start in any case?

STRONG: I don’t know if there’s a bigger legend in American film than Barry Levinson, and he’s a true master. I call him “Yoda” or “Jedi” on set. He’ll always kind of chuckle at that. But that’s how I viewed him, as this Jedi master, who knew things before anyone else even thought about them.

As far as the pilot goes, we very much worked hand in hand, with me as the show runner, him as the director, talking things out with the cinematographer, and the production designer. We were all in the same meetings together, and I certainly followed Barry’s genius on many decisions. But Barry wanted to make sure that I liked those decisions, too, and it was a dialogue.

I have to say, as a director myself, to get to spend four months attached at the hip of a master, I can’t tell you what an incredible educational experience that was, and how much I learned, just observing him. And from the other directors, too. We had Michael Cuesta and Patricia Riggen. They’re incredible directors, and I learned a lot from them as well. We just had this unbelievable group. I was the least experienced director of the group by a country mile, to be honest with you. But it was a great group.

AX: You only directed the last two episodes of DOPESICK. Why was that?

STRONG: In doing the last two, it was the only way I could direct, because I was show-running, so by the time we got to the last two, the scripts would all be done, I would have gotten through some post-production, and it felt like the most efficient way to direct two episodes. And I loved the idea [that by] directing the finale, I could finish what I started, and that felt rewarding as well.