WHAT WE DO IN THE SHADOWS: Natasia Demetriou vamps it up in Season 2 – Exclusive Interview

The actress is on fire in the vampire comedy - sometimes literally 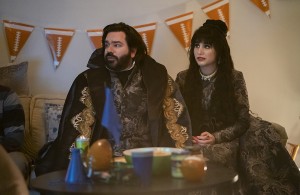 WHAT WE DO IN THE SHADOWS is back for its second season on Wednesday nights on FX. The horror comedy, based on the film of the same name from creators Jemaine Clement and Taiki Waititi, gives us more adventures with the group of vampire roommates, unliving together in a mansion on Staten Island.

British actress Natasia Demetriou plays Nadja, the lone woman in the group, who turned and is married to Laszlo, portrayed by Matt Berry. Kayvan Novak is Nandor the Relentless, Mark Proksch is energy vampire Colin Robinson, and Harvey Guillen is their human familiar Guillermo.

Last season, Nadja took pity on a mortal college student, played by Beanie Feldstein, and turned her into a vampire who had the surprising power of invisibility. Nadja keeps loving and losing the mortal Gregor (played by recurring guest Jake McDornan), who is doomed to keep repeating their affair and then getting decapitated by Laszlo. His ghost has turned up this season. On this upside, this season, the ghost of Nadja’s mortal self has now possessed a Nadja-lookalike doll (voiced by Demetriou), so vampire Nadja now has a like-minded companion to commiserate with when the guys start getting too dumb.

Demetriou, a writer as well as a performer, has a background in stand-up comedy, and has created/written for the British TV series MIDNIGHT BEAST and YEAR FRIENDS, in which she also appears, along with her actor/writer brother Jamie Demetriou and her writing partner Ellie White. Demetriou and White also created and star in the U.K. series ELLIE & NATASIA.

At a party thrown by FX for the Television Critics Association (TCA) Winter 2020 press tour, Demetriou takes time to talk about what she does on WHAT WE DO IN THE SHADOWS.

ASSIGNMENT X: Not asking for spoilers, but what was your favorite scene or favorite episode from Season 1 of WHAT WE DO IN THE SHADOWS?

NATASIA DEMETRIOU: I loved all of it, the whole thing. I felt like I had to pinch myself, because I was so excited to be in a show of that caliber, on a show that level, with that production value, all that stuff that I never had before. But I would say the stuff that I felt like I found the character of Nadja the most when I did stuff with Beanie. That was really amazing. Because that was like a different side to the character. 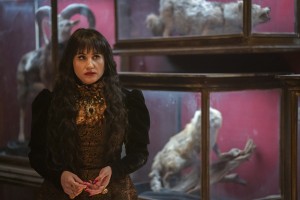 DEMETRIOU: Yeah, maternal and a bit mad. And the stuff with Gregor I loved. But doing stuff with Matt is always so easy, because we’re very lucky that I think we have a natural [affinity for each other; Berry is also a writer/actor]. Basically, we have the same humor. We both like toilets. We find a bunch of toilets very funny.

AX: What’s the interaction like between the actors and the writers’ room on WHAT WE DO IN THE SHADOWS? Do they encourage on-set improvisation?

DEMETRIOU: It’s just a lovely way to do comedy, I think, where you have the freedom to try stuff, but then you also have a really strong, solid script to go back to if you’re braindead and tired.

AX: Was there anything that you found particularly difficult, maybe the wire work when Nadja is flying or crawling up a wall, or the talking through the teeth when Nadja has fangs?

DEMETRIOU: Truly, the most difficult thing is being away from home for that amount of time. And night shoots make you go mad. When you’re not sleeping properly, any human in any job, anywhere, would go a little bit mad. And I think that and the cold is the hardest thing. But we’re very lucky that we’re very looked-after. And it’s a comedy. I think if I was filming THE HANDMAID’S TALE or a very serious drama, it might be worse. At least when we get to being on camera, it’s all very stupid and funny. 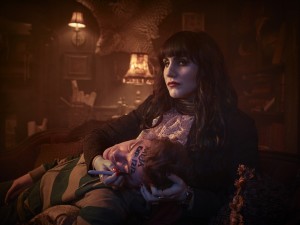 AX: How do you do the wall crawling?

DEMETRIOU: A fantastic physique and a lot of core strength and the ability to crawl up walls. No, sometimes we have [a stunt double]. I’ve done a lot with wall crawling, though. They have an amazing stunt team, who are very, very good, and you practice it.

AX: Jemaine Clement said that sometimes you’re on a wire that takes you up the wall, or they’ll make the floor look like a wall, and change the camera angle and pull you along. Is it stressful trying to keep up with the wire, or is the wire keeping up with you? In other words, how do you avoid looking like you are being yanked faster than you are moving?

DEMETRIOU: It makes me laugh a lot whenever we do wire work, all of us, especially when me, Matt, and Kayvan are on wires, because we are not the fittest of casts and we are not action actors. And so it really makes me laugh, because sometimes we do look like babies, just being dangled.

AX: When Nadja’s husband Laszlo turns into a bat, he says, “Bat!”, and she just transforms quietly. Is it just that Nadja has no attitude about this, and Laszlo does have an attitude?

DEMETRIOU: I think Laszlo’s like, “If I can do this thing in as little steps as possible, that’ll be good.” So saying “Bat!” is, “Why wouldn’t I say it, it makes it go quicker, I’m going to say, “Bat!’” Whereas I think Nadja is maybe more advanced than Laszlo in a few ways. And so she doesn’t need to shout, “Bat!” She can just muster the power very discreetly and promptly, and turn into a bat.

AX: Did you have a live bat at any point on the set?

DEMETRIOU: We didn’t. What we did have, which I found hilarious, is quite often, when they’re filming our transformation into bats, there will be a rubber bat on a stick, and a bit of wire. And you’re like, “Right. We’re stood in the most opulent room I’ve ever seen, surrounded by some of the most talented people I’ve ever met, and yet there’s a rubber bat on a stick being bounced around to replicate us.” So yeah, that’s very funny.

AX: How was working with Jake McDornan as Nadja’s continually reincarnated lover Gregor, who most recently came back as a parking garage attendant named Jeff?

DEMETRIOU: Oh, I love Jake. It was so weird – I was so nervous with Gregor when I knew I had that scene with him in the pilot. I was so worried. And instantly, we got on. He was telling me recently that him and his friends use a lot of the way I speak to him in the show. He uses that in his everyday life, so when I call him “My cheeky little baby,” him and his friends call each other “cheeky little baby.” Yeah, Jake’s amazing, and so talented. And also, he plays kind of a straight character, but he is so funny, he’s so subtly a moron. He can play that subtle meathead good-looking guy so well, and in real life, he’s so on it, and self-aware. He’s so talented. He’s worked for so many years, and popped up in so many different shows. It was a real pleasure, and I was so happy that he was back this year. 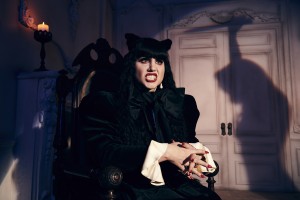 AX: I don’t know if he’ll be back this year, but originally, the vampires were working for the Baron, an ancient vamp played by Doug Jones under major prosthetic makeup. The Baron died accidentally, and there have been some consequences, but how was working with Doug Jones?

DEMETRIOU: Doug Jones is maybe the sweetest man I’ve ever met. To make an impression so instantly as being a really, genuinely good soul is a hard thing to do in this industry. So sweet, so hardworking, so patient, so supportive – all the good words in the world for Doug Jones. He’s an angel. And works so hard. What he does is so difficult. I’ve done bits of prosthetic work, and after three hours, I’m like, “Get this off my face, I’m suffocating.” And he does that as a living, and it’s only someone that has the patience of a saint that could deal with something like that.

AX: Is there anything you’ve learned doing WHAT WE DO IN THE SHADOWS that’s been particularly interesting to you?

DEMETRIOU: I think I’ve learned an awful lot. I couldn’t measure what I’ve learned. I’ve never worked on a show like this, with so many elements. It’s a vampire comedy that’s a mockumentary, there’s period drama, and it’s also supernatural. So you’ve got the opulent settings of the house. Then you’ve got the costumes. Then you’ve got wire work and special effects. It’s very, very involved. And so I’ve learned about dealing with that. I’ve learned about myself – I know that I have a limit, and that is, three hours sleep is too little sleep. On top of that, I’ve learned, don’t stand near candles when you’re wearing period costumes, because you will set on fire. And that’s happened to me three times. Luckily, there are amazing firemen on set, which genuinely saved my life.

AX: I’m very glad that the firemen were there, that you appear unharmed, and know not to stand near candles anymore. Do you have a favorite piece of hopefully nonflammable wardrobe that you’ve gotten to wear?

DEMETRIOU: I do. There was this jacket that Amanda Neale, the costume designer, bought for me from a vintage market, which was a jacket that, my sleeves were so big, I couldn’t really fit through the doors, and that was amazing to wear, because it was a real Joan Collins moment for me. It was very DYNASTY, black velvet jacket with huge puffed sleeves. I loved it with all my heart. 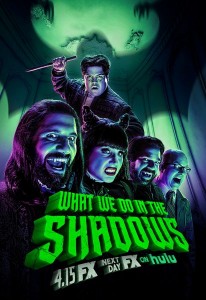 DEMETRIOU: I do. Me and my writing partner, Ellie White, are writing a sketch show for the BBC. We’ve got a series, which after this is where I’m going, to start writing that.

AX: So are you in that, as well as writing it?

DEMETRIOU: Yeah, it’s our sketch show. And then me and my brother Jamie make a show called STATH LETS FLATS. It’s a really funny name. I think in North America, the translation would be, “Greek Boy Rents Apartments.” It’s about an estate agent [realtor]. It’s based very much on our family growing up, and it’s one of the things I’m most proud of in my life. It’s got two series, and they’re all on Channel Four in the U.K. Jamie was in Series 1 of FLEABAG. He played the guy with the big teeth. Apart from that, I got to do a really lovely cameo with my brother in a new film coming out on Netflix, with Will Ferrell, called EUROVISION. That was really fun.

AX: And what would you most like people to know about Season 2 of WHAT WE DO IN THE SHADOWS?

DEMETRIOU: That it’s funnier, and sillier, and more filthy than Series 1. And Mark Hamill’s in it.

Article Source: Assignment X
Article: Exclusive Interview with WHAT WE DO IN SHADOWS actress Natasia Demetriou on Season 2