Supernatural Season 15 Our Father Who Aren't In Heaven recap 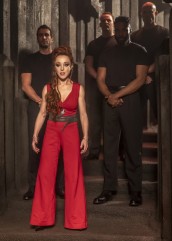 TV Review: SUPERNATURAL – Season 15 – “Our Father, Who Aren’t In Heaven”

After ten years, the return of Adam 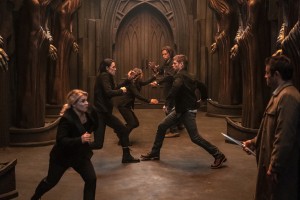 Jared Padalecki as Sam, Jensen Ackles as Dean and Misha Collins as Castiel in SUPERNATURAL – Season 15 – “Our Father, Who Aren’t In Heaven” | ©2019 The CW Network, LLC. All Rights Reserved/Colin Bentley

We’ve waited almost ten years for this, but Sam (Jared Padalecki) and Dean (Jensen Ackles) Winchesters’ half-brother Adam (Jake Abel) is finally back, as is Michael, the archangel in Adam’s body (also Abel). Chuck (Rob Benedict) never really left, and a few other faces show up in “Our Father, Who Aren’t in Heaven.” The episode pushes things forward in a big way.

Chuck, aka God, is holed up in a seedy casino. He’s in a bad mood, having smote everyone there except his terrified cocktail waitress, but he’s still playing and winning at slots.

Eileen (Shoshannah Stern), happily alive again, is out Hunting vampires. She’s got it handled, but even so, Sam has tailed her because he was worried. No need.

When Sam and Eileen return to the bunker, Castiel (Misha Collins) is still there. Dean triumphantly bursts into the kitchen, announcing he’s found a way to defeat God.

In a burst of deductive reasoning that actually makes a remarkable amount of sense, Dean (even if he doesn’t know that an Achilles hell means a weak spot) has come to the following realization. God dictated the angel and demon tablets to his scribe Metatron. The tablets describe how to lock away angels and demons. But since God can lock away angels and demons himself, why would he need to leave instructions for this? If these were contingencies for a time when God might be sidelined, then God must have foreseen something that could sideline him. (One other possibility is that God just finds it hilarious to watch humans try to use the tablets, but nobody mentions this.) Our guys just need to figure out what that something is.

Of course, Sam and Dean can’t read the tablets. But their beleaguered friend, soulless Prophet of the Lord Donatello Renfield (Keith Szarabajka) can. After a display of initial reluctance, Donatello comes back to the bunker and starts translating the tablet. He says that Metatron put in some side notes, explaining that God was afraid of something, but that something was only explained to “His favorite.” 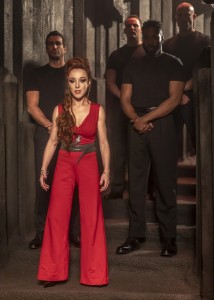 Ruth Connell as Rowena in SUPERNATURAL – Season 15 – “Our Father, Who Aren’t In Heaven” | ©2019 The CW Network, LLC. All Rights Reserved/Colin Bentley

Castiel, who was around at the time, knew the favorite was the angel Michael. No version of the angel Michael likes the Winchesters. Jack smote the alternative-universe version of Michael. Our world’s Michael possessed the body of Sam and Dean’s half-brother and then fell into the cage in Hell (back at the end of Season 5). Dean theorizes that Michael may now be profoundly annoyed at God for letting him sit in the cage all this time. Maybe he’d be up for a bit of vengeance, even if it meant helping the Winchesters.

And then Donatello momentarily faints. When he comes to, he’s possessed by God/Chuck. God/Chuck says they should leave this alone, or he’ll go all-powerful on everyone Sam and Dean know. Dilemma!

Clearly, even the bunker’s wards can’t keep out God. Once Donatello is himself again, the boys send him home – Donatello is only too happy to go – and then strategize. Defying God puts everybody they care about in danger, but everybody they care about is in danger from God no matter what. Castiel points out that Michael is not only in the cage, but also insane. Dean counters that they were told Michael is insane by Lucifer and God, two not-trusted sources. Dean tells Castiel he can stay behind if he wants. Oh, Dean, give it a rest.

Sam, Dean and Castiel perform Rowena’s old “take me to Hell” spell, which works, leaving Eileen alone in the bunker.

Arriving in Hell, the guys are promptly set upon by a pack of female demons, who proceed to kick the crap out of them until a voice rings out: “Leave them alone!” And, surprise, it’s Rowena (Ruth Connell).

Turns out, once she fell into the chasm and died, Rowena conquered Hell and is now queen here. Rowena stops Sam from apologizing for killing her – she says it’s the best thing that ever happened. She confirms that Michael is out of his mind. He’s also possibly out of Hell, since God opened all the doors, and anyone could be who knows where. Rowena sends Sam from the room briefly. She senses tension between Dean and Castiel and tells them, whatever is going on, they need to fix it. Yep. But will they? This is SUPERNATURAL. Not until every last drop of angst is wrung out of the situation, they won’t.

Eileen gets a video call from a Hunter friend, who wants her to come fight vamps. Eileen is still tending the spell intended to get Sam, Dean and Castiel back out of Hell, but says she’d be happy to help out once she’s free.

Michael and his vessel Adam (both played by Jake Abel) are not in Hell, but rather in a diner somewhere. Adam is enjoying food, Michael is enjoying not being in Hell. They are getting along with each other very well. Adam sees Michael when they talk – other people just see Adam talking to someone who isn’t there. Both believe they are absolutely alone. Then mother of demons Lilith (Anna Grace Barlow) drops in. She’s been sent by God to fetch Michael. So far as Michael knows, God is missing (He was back at the end of Season 5), so he’s not inclined to believe Lilith. When she tries to insist, he smites her, wipes the smiting from the minds of the shocked diner patrons, and leaves.

Back from Hell, Dean teases Sam about Eileen. Even though Sam and Dean have tried the family thing and both failed disastrously at it, Dean thinks Sam may have a shot with Eileen, since she understand and lives the life. Sam could do worse – “and she could do much, much better.”

Donatello detects Michael’s presence in the world. Castiel sets an angel trap for Michael. Michael has unpleasant memories of their last encounter, and doesn’t believe what Castiel is telling him – Michael is really supposed to trust this guy who sent him to Hell over his own Father? Then Sam and Dean show up.

Having gotten Michael back to the bunker, Sam, Dean and Castiel try to reason with him. He refuses to believe them about God. Then Michael lets Adam talk to them. Dean (who had been possessed by Alternative-Universe Michael) is astonished that this Michael lets Adam exist and share the body. Adam explains that he and Michael came to an arrangement while in the cage; after all, they only had each other. Adam would like Sam and Dean to say they’re sorry for what they did. Then Michael comes back, still refusing to believe them.

Eileen gets another call from her Hunter friend about the vamps. The call blacks out midway through the conversation. Eileen runs and tells Sam; they both take off to try to catch the vamps.

Adam tries to argue with Michael. Adam is still really pissed with his half-brothers, but thinks they are doing what they believe to be right. Michael won’t hear it. Then Castiel comes in and goads Michael. Is Castiel trying to get a beatdown from the archangel? No, Castiel wants to get Michael in a headlock so that Castiel can use angel telepathy to show Michael memories of Chuck being devious and declaring less than divine intentions.

Sam and Eileen show up at the parking garage where Eileen’s friend was last seen. At first, it seems to be empty. Then the friend shows up – and promptly turns into Chuck. Uh-oh.

Back at the bunker, Dean and Castiel are unaware of this immediate danger. Michael is still traumatized by what Castiel showed him – he’s not even the only Michael! – and is willing to help bring down his Father. Michael says that the spell that trapped the Darkness (God’s sister, Amara) ought to work on God. One of the ingredients, however, is a Leviathan blossom, which can only be found in Purgatory. Michael opens a rift that he says will last twelve hours so that Dean and Castiel can go to Purgatory.

Dean asks to speak to Adam. Dean tells his half-brother that he, Dean, really is sorry. Adam is a good man; he didn’t deserve any of this. Adam smiles sadly. “When do any of us ever get what we deserve?” Then Adam/Michael leaves, and Dean and Castiel head into the rift.

Well, danger, Will Robinson. It seems a little odd that it wouldn’t occur to anybody that Chuck might try to get Sam or Dean or Castiel alone (or at least away from the other two). Then again, so much went into getting to Michael, having him cough up the relevant information and interacting with Adam that a little short-sightedness can probably be excused.

“Our Father, Who Aren’t in Heaven” has a lot going for it. First of all, it has good plot twists. Second of all, the show has figured out how to re-incorporate Connell’s Rowena. Third, Szarabajka is reliably humorous. Fourth, for a show as focused on family as SUPERNATURAL is, it’s high time we saw Adam again, and this episode handles the reunion with just the right amount of emotion and regret.

TV Review: CHUCK – Season 4 – “Vs. The Gobbler”
Theatre Review: DANNY AND THE DEEP BLUE SEA
THE BABADOOK Highlights this week in Blu-ray, DVD and VOD Releases
WYNONNA EARP: Actor Tim Rozon on the end of the Syfy series - Intervie...