A betwixt and between episode, mainly there for the arc 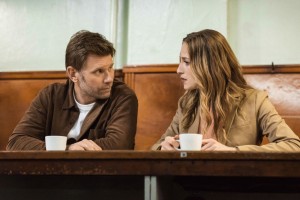 In the SUPERNATURAL episode “Unhuman Nature”, Jack (Alexander Calvert) is getting sicker. When Castiel (Misha Collins) can’t do anything to heal him, Sam (Jared Padalecki) and Dean (Jensen Ackles) take Jack to the emergency room. The doctors can tell that Jack is suffering systemic failure, but not what’s causing it. Since the doctors don’t know that Jack is half-archangel (on dad Lucifer’s side) and half-human (on his mom Kelly’s side), and wouldn’t know how to treat him if they did know, Dean, Sam and Castiel take Jack back from the emergency room.

What else can be done? Call a witch, namely Rowena (Ruth Connell). Rowena is at first deeply not thrilled to hear that Lucifer has offspring, but Jack charms her before collapsing again. Rowena does a spell and now knows the problem. Nephelim, she explains to the guys, are delicate creatures. Without their grace to keep their systems in balance, they internally fall apart. Castiel offers his grace, but Rowena explains that since Jack is part archangel, only an archangel’s grace will do. Dean’s vision goes wobbly. Is this because he’s been inhabited by the archangel Michael, or is something else going on? 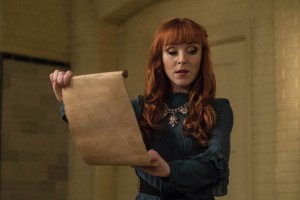 Jack is determined to experience some of normal life in whatever time he has left. Instead of arguing with him, Dean decides to take the kid on a road trip, to the consternation of Sam and Castiel. Dean teaches Jack to drive at the wheel of Baby(!), which causes Jack to say, “I’m you!” Dean wants to squelch this thought, but when the two are fishing together, Jack recalls Dean telling him about a happy memory from his childhood with dad John Winchester. It’s clear Jack is enjoying the father/son bond, doing regular human things with Dean.

Ketch (offscreen) provides a referral for a shaman named Sergei (Dimitri Vantis), who may be able to help Jack. Castiel goes to talk to Sergei at his motor home. After suffering through a fiery angel trap, Castiel sits down with the shaman. Sergei, it turns out, has a vial of Gabriel’s grace, taken in trade for the concealment spell Sergei gave the late archangel so that he could hide out in Monte Carlo. Sergei offers the grace, and an accompanying spell, for a favor from the Winchesters to be named later.

Castiel takes the grace and the spell back to the bunker. Rowena does the incantation over Jack. Jack’s eyes glow and he feels better – momentarily. Then he collapses. Castiel calls Sergei, who is busy getting stoned. Sergei says this was an experimental treatment. Castiel is furious and says that if Jack dies, he’ll find Sergei. Sergei, who moves around a lot, does not seem intimidated.

Elsewhere, Nick (Mark Pellegrino), formerly Lucifer’s longtime vessel, is struggling with problems of his own. Nick is trying to find out who killed his family, which caused him the grief that made him allow Lucifer into him. Since Nick has recently murdered a reluctant witness, then a less than helpful priest, we and Nick might conclude that he’s the guilty party, but he has what seems like a solid alibi. Nick is now trying to control urges to murder random people.

Nick tracks down Frank Kellogg (Craig March), who was a beat cop in the neighborhood on the night Nick’s family was killed. Nick suspects Kellogg of being the murderer and tries beating him into a confession. Frank finally admits that he was outside Nick’s home when he encountered someone who called himself Abraxis. Nick realizes he knows the name because Lucifer knew the name. Abraxis was a demon. Nick then deduces that Frank killed Nick’s family while possessed by Abraxis. Nick does and does not blame Frank. He winds up beating Frank to death with a hammer, partly because even though Frank as a person didn’t kill Nick’s family, he still embodied the killer. The other part, Nick says aloud, unhappy, is that he enjoys killing people. He doesn’t miss his innocence; he missed the lack of guilt and misery he felt while Lucifer was in him. He wants Lucifer back. And somewhere, something dark, with red eyes, awakens …

If that’s meant to be Lucifer, it looks kind of like the Terminator, but that’s as good an image as any. Pellegrino has done a superb job as Lucifer so far; there would certainly be worse ways to bring back the ostensibly dead fallen archangel.

The opening “then” (i.e., “previously on”) clips remind us of how deeply Dean was opposed to Jack at the beginning, threatening to kill him at the first misstep. The father/son stuff between them is decent. Since Jack is going for a few moments of normalcy, Dean is probably his best bet, though it seems that the closer father/son relationship is between Castiel and Jack. (This also would have yielded weirder and perhaps funnier results on a road trip, but what the heck.)

“Unhuman Nature” is notable for its lack of monsters (except in the past) and any kind of Hunting. It’s nice to see the SUPERNATURAL formula get shaken now and then, but the episode feels a little betwixt and between, vamping until the next big event.