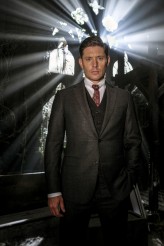 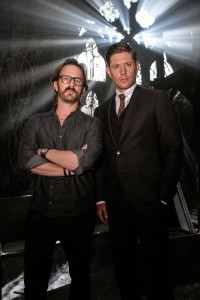 In Duluth, Minnesota, Dean (Jensen Ackles) is having no success ejecting smug alternative-universe archangel Michael from his body. Michael is doing experiments mixing blood with angelic grace and feeding it to vampires. This is causing the vampires to die screaming with their eyes blown out, which is not the result Michael wants. Those who have seen the previous episode will remember that Michael was impressed by the purity of vampire hunger.

Michael is tossing out failed-experiment bodies in such quantities that news soon reaches the bunker. Sam (Jared Padalecki), Mary (Samantha Smith), and alternative-universe Bobby (Jim Beaver) all head for Duluth in the hopesoif rescuing Dean and destroying Michael.

Castiel (Misha Collins) is left behind at the bunker. This is partly out of concern that Michael would sense Castiel’s angelic presence, and partly because somebody has to stay behind and watch Lucifer’s half-human son Jack (Alexander Calvert), who has at least for the present lost his powers, and babysit Nick (Mark Pellegrino), who until recently had Lucifer inhabiting his body.

Nick is aware that the others can barely stand to look at him. Having memory flashes of what Lucifer did while wearing Nick, Nick can barely stand himself. He doesn’t understand why he’d agree to let Lucifer into his body (demons can possess, angels have to be allowed in – Lucifer was fallen, but still an angel). Castiel gently suggests this is because Nick’s wife and son were killed by an intruder, and Nick was overwhelmed with grief.

Meanwhile, Jack is doing research, trying to find out when his powers may come back. Bad news per Castiel: it could take anywhere from a month to a century. Castiel gives Jack a pep talk about the time Castiel lost his grace – but he still had Dean, Sam, and himself. Okay, Jack has himself, Sam, and Castiel. Right now, nobody’s got Dean except Michael, who doesn’t seem inclined to return him.

In Duluth, Sam, Mary, and Bobby do the FBI act as well as they’re able (Bobby says “DFA” when he means “DEA”) and find that a lot of the mysterious corpses are vampires. The coroner reports that a young woman came in to identify one of the bodies, then decided she didn’t know any of the victims after all and left. 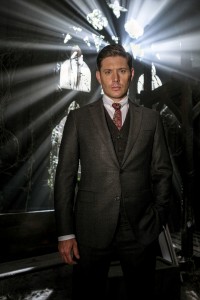 Nick starts researching what happened to his family. There was no police follow-up. He now feels worse – if he hadn’t let Lucifer in, he would have pressed the cops until they found the killer. When Castiel tries to comfort him, Nick snaps his fingers in a very Lucifer-y gesture. Castiel thinks that maybe Lucifer left a more lasting impression on Nick than anybody realized.

Nick is frustrated in his attempts to get information out of the police where he used to live, pre-possession. Apparently a witness saw someone leaving Nick’s house, but then recanted and said they hadn’t seen anything. Castiel explains to Nick that he’s inhabiting the body of Jimmy Novak. Nick accuses Castiel of being a “body jacker,” just like Lucifer. Castiel says that, although Jimmy was fine with having Castiel in his body, what happened to the Novak family is Castiel’s biggest regret.

Jack, meanwhile, goes to meet his maternal grandparents (Fred Keating and Chilton Crane). Since Jack can hardly say that he’s Kelly’s baby (they knew she was pregnant – recently!), he instead introduces himself as a good friend of hers. The Klines are moved by Jack’s true stories of how great Kelly was with her baby, and he’s moved to know he was named for his grandfather and by seeing photos of Kelly when she was a little girl.

In Duluth, Sam, Mary and Bobby track down Lydia Crawford (Meganne Young), the young woman who visited the morgue. She’s a vampire who managed to escape Michael’s experiments. She describes what Michael was doing and says she doesn’t know what he hoped to achieve, but she’ll lead the Hunters to him in exchange for her un-life.

Dean/Michael sets up a meeting with local werewolf pack leader Philippe (Ben Wilkinson). Michael lays out his vision of a world where there are only enough humans left to be slaves or a food source for werewolves, vampires, and the like. To Michael’s mind, humans are the real monsters. He tells Philippe that he’s come up with a way of enhancing werewolf/vampire/et cetera powers.

It also turns out that Michael let Lydia escape and deliberately set out the bodies where they’d be found, all to attract Sam and his friends. Michael kills Lydia

Castiel scolds Jack for going out alone. Since Jack is being hunted by every angel, demon and whatnot in the universe, and Jack doesn’t even have his powers right now, this was very dangerous. Jack counters that Castiel told him that he should trust in himself, and to Jack, that meant finding his “real” family. Castiel is hurt (hey, isn’t Cas family?), but understands. Then Jack asks if Sam has found Dean/Michael yet. Castiel says yes. Jack asks what will happen if Sam and the others can’t force Michael out of Dean. Having seen the alternate universe where Michael was in charge, Jack concludes that Michael must be stopped, even if it means killing Dean. “Dean doesn’t matter.” Castiel is horrified. Jack points out that Dean wouldn’t want the others to risk letting Michael loose just to save him. Jack is right. Jack is also dealing with Castiel, so it doesn’t matter that he’s right.

Nick has tracked down his old neighbor Arty (Michael Bean), who is very nervous when recounting what he saw or didn’t see the night Nick’s family was murdered. Nick knows that the murders were committed with a hammer. Later, we see Nick staring into a mirror, holding a hammer – and Arty’s dead body on the floor behind him. Seems like Nick has maybe always been the kind of person who wouldn’t mind having Lucifer inside him.

Sam, Mary and Bobby go to the building where Lydia said they’d find Michael/Dean. Instead, they find a pack of enhanced werewolves, who are immune to silver bullets. After a bloody battle, our team prevails, unbitten but bewildered. And then Dean enters. It seems to really be Dean, even though he’s not sure why Michael has left his body.

“Gods and Monsters” is a SUPERNATURAL building blocks episode. The script is deft in its juggling of the multiple plot strands: what’s going on with Dean, Michael’s plans for world domination, Jack’s identity issues, and Nick’s homicidal history. It’s also fun to see Ackles get to be suave and debonair when he’s playing Michael. Otherwise, “Gods and Monsters” doesn’t have any particular highlights. It’s here to move the seasonal arc along, and does so deftly, but it’s not memorable in itself.