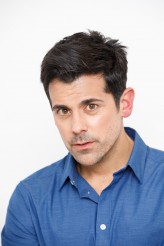 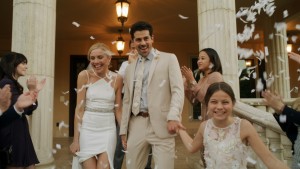 STALKED BY MY HUSBAND’S EX premieres on Lifetime on Saturday, July 25. Adam Huss plays the husband of the title, Ryan Munson. In the opening sequence, he is attacked by his then-wife, Nina (Juliana Dever). Four years later, Ryan has been raising their young daughter Lisa (Joey Rae Blair) as a single parent, but he’s planning to propose to girlfriend Kristen (Alex McKenna). This does not sit well with Nina, who is newly released from prison and determined to get little Lisa back.

Huss, originally from New York, played Josh Kantos on three seasons of Starz’s series POWER. Other film and TV credits include THE BOLD AND THE BEAUTIFUL, LAS VEGAS, DREAMS I NEVER HAD, THE CEMETERY, THE BAR, and SHATTERED as well as his other, recent Lifetime movie, MILE HIGH ESCORTS.

In an exclusive interview, Huss discusses working on STALKED BY MY HUSBAND’S EX (which is also called ANOTHER MOTHER for its international distribution), and more.

ASSIGNMENT X: How did you get involved in STALKED BY MY HUSBAND’S EX?

ADAM HUSS: I just auditioned on tape. Actually, the casting director has cast me in a couple movies now of the same ilk, some different things, sci-fi films, too. They couldn’t find the guy. So finally [someone] said, “What about my friend who’s on tape?” I was shooting something else that I was just finishing, and I came from set last-minute to a callback, and [director] Anthony [C. Ferrante] and I just clicked. And then the next day I was offered the part. 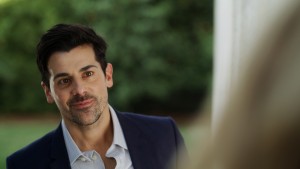 AX: There’s some ambiguity about your character in STALKED BY MY HUSBAND’S EX, because in the third act, things start shifting around. Were you told to play Ryan ambiguously?

HUSS: With any of those movies, you want to always leave it as a mystery as to what’s really going on. Am I connected to this stalking somehow? But I just played what was there with sincerity, and if there was a little bit of caring, like a feeling I still had for my ex-wife, who is stalking her, that’s probably where the ambiguity might be coming in.

AX: Had you done any other Lifetime movies? 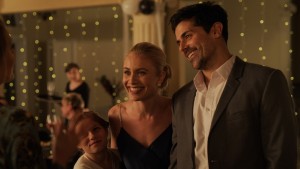 AX: Do you play one of the title characters in MILE HIGH ESCORTS?

HUSS: [laughs] No. It was originally called SECRETS IN THE AIR. It’s about these women who are stewardesses on a plane, and this woman says, “No, come work for me, I can change your life,” and of course, she’s secretly selling these women to the high-end clientele, which was me. I play a creep. He winds up taking advantage of one of the women, and they take revenge on him.

AX: Back to STALKED BY MY HUSBAND’S EX, in the opening sequence, you get hit over the head by Juliana Dever’s character, and have to collapse onto the ground. Did you do your own fall?

HUSS: Yeah, I did that. They had a pad, and they had the crash mat, and you put pads on your knees. I’ve done stunts before. I always leave it up to the stunt guy. I’m not one of these people [who says], “I do my own stunts.” But, coming from independent films, you do a lot of your own stuff. So this was like cake, compared to some of the things I’ve done. So it was fun to do. And Juliana is so professional. She was on CASTLE for all those years, so I think she has some experience in crazy adventures. 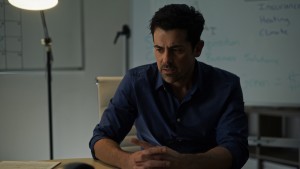 AX: How was working with Alex McKenna, who plays your fiancée?

HUSS: She was wonderful. You never know who you’re going to connect with, how it’s going to go. When you’re playing someone’s husband, you want to hope you have a connection, and we really did. I loved working with her. I felt a kinship to her immediately. Quick little shoots, you become fast friends or you don’t, and we really, after a day or two, we were very close. And I felt like it helped the chemistry.

AX: How is it playing the father of a little girl?

HUSS: Well, I love kids. I don’t have a child yet, but I have six nieces, but I have a big part in their lives, especially the older ones. My oldest niece is twenty-two, and my other nieces just graduated high school, but then I have little ones now. But those older ones, I was around for a lot of their upbringing, and on Father’s Day, my brother is great, but they’ll always write me a card, too. “You’re our father, too. Happy Father’s Day!” I don’t know how he feels about that [laughs]. So I had a lot of success. For me, I really clicked into that role. Joey really bonded with Alex, just because probably [Alex is a] woman, and female energy. I never try too hard with kids, I just waited for her to come around to me, and eventually, she did. So it was a lot of fun. And at the end, we really were a set, the three of us.

AX: How is working with director Anthony C. Ferrante?

HUSS: I loved working with Anthony, such a gem of a human. Anthony’s fast. You can see his brain working. I said to him, “Man, I can’t wait to see what you do with a big budget.” Because his brain goes so fast, and he’s so good on the fly in these guerilla type of atmospheres, that he makes magic happen, and I know with a bigger budget and time, he could make the next AVENGERS.

The first day, you’re meeting everyone and working it out. And we had a big [scene]. He was like, “Okay, I want you to come in, and you’re going to be looking for your daughter, and you’re going to be frantic, frantic.” And it just felt like, “Where are we coming from? Because we haven’t shot that [earlier scene yet].” And I came in, and he said, “More, more, more,” and it felt big. And at the end of the day, I was like, “This doesn’t feel right, I don’t know why, I just feel like I come across too much.” So we found our language that day, because I was able to speak up, and he really respected that. As long as you come at someone from the right intention, and there is a character choice, not just ego speaking, Anthony was really receptive to that. So once we found our groove after that first day, coming in, making those choices, and going, “This is how I saw it,” and then us talking it through, he was very receptive and open to that as a director. Not every director is, especially on these little things. They want to bang it out and do what they want to do. So I loved how open he was. And again, he’s so generous that once you trust him, you know he trusts you, and if you’re not delivering it, he’ll let you know. 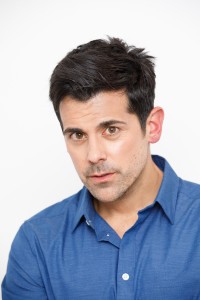 AX: Where did you shoot STALKED BY MY HUSBAND’S EX? The story is set in Santa Barbara …

HUSS: We did not shoot in Santa Barbara, but I love it there. We shot all over L.A. and Pasadena, pretty much one house in the Valley.

AX: Because Kristen is a hotelier and your characters go to a lot of fancy functions together, STALKED BY MY HUSBAND’S EX requires you to be dressed up a lot. How was that?

HUSS: Well, it’s funny. We had great wardrobe stylists [Angela Solouki and Brittany Ann Cormack] on this, who did a lot with a little. And so I didn’t have to wear a lot of my stuff. I have some great suits, but I’ve worn them in so many of these now that I’m like, “I can’t wear these anymore.” [laughs] So thankfully, [the costume designers] had great stuff, and that always helps, when you’re in clothes that make you feel the part, not oversized or sleazy.

AX: Do you have a favorite scene or sequence in STALKED BY MY HUSBAND’S EX?

HUSS: One of my favorite scenes is the [one] I auditioned with, actually, which is the scene with Joey where we’re picking out the ring for Alex. I really enjoyed playing that scene with her. I liked the levels. I love the vulnerable stuff. I think another one of the scenes is Alex and I getting the news that her friend has passed away. I love digging into those emotional scenes. I wish I was there for all that fun chasing stuff. That stuff I would have loved, but those are the two that I remember. Any scene with Alex and Joey was a real treat.

Also, I know we have a dinner with Melissa Ordway, who played Alex’s best friend. She was great, and I loved working with her. We had that one night of the engagement party. That was a fun night. We were all together, and Juliana was there, because she comes in with the water and the mace and all that stuff. That was fun.

AX: What was actually in the mace bottle?

HUSS: Water. That night was crazy, because there was so much to cover of that party. So when we got to that moment, it was like, “Okay, this is going to happen.” This is one of those things you’ve got to roll with in independent filmmaking. Anthony assured me, “It’s water. We’re going to spray it on you, but don’t worry.” And honestly, once we were in that fight, I hardly felt that water. [laughs] 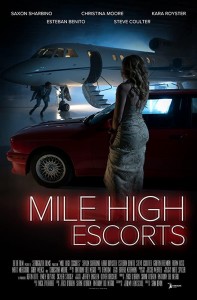 AX: Years ago, you were in a few episodes of arguably one of the craziest soap operas ever made, PASSIONS, as an impostor version of one of the leads. What was that like?

HUSS: It was so ridiculous. There was a character named Miguel, played by Jesse Metcalfe. I was his double. It made no sense [laughs]. He played himself, but then he would pull his mask off [MISSION: IMPOSSIBLE-style], and I would be underneath it [laughs]. Whoever was the bad guy at the time was trying to bring him down. It was a blast to play, but really nuts.

HUSS: I just did a Zoom horror short, THE TRIBE. It was directed by Matt Leslie, co-director of SUMMER OF ’84, and produced/written by Dylan Mulick. This was fun to be a part of, because Matt has a big horror following. We did that at the beginning of the pandemic. It drops on July 27, platform to be announced soon, but it will definitely be available via YouTube. I’m producing and starring in a werewolf horror feature film called LET IT KILL YOU. I did a movie called MUNA, and that just came out on iTunes, Amazon Prime, Apple, all those places.

AX: And what would you most like people to know about STALKED BY MY HUSBAND’S EX?

HUSS: That it’s a lot of fun. I think if you tune in, you’ll get the feels and you’ll have a fun little Lifetime thriller experience. I think it’s a good one.

Related: Exclusive Interview with actress Alex McKenna  on STALKED BY MY HUSBAND’S EX

Related: Exclusive Interview with actress Juliana Dever on STALKED BY MY HUSBAND’S EX and CASTLE