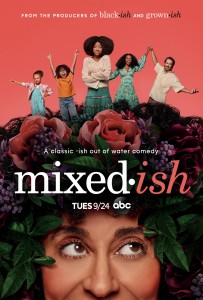 MIXED-ISH, on ABC Tuesdays in its first season, is spun off from the network’s long-running comedy BLACK-ISH. Tracee Ellis Ross, who co-created MIXED-ISH with BLACK-ISH creator Kenya Barris and Peter Saji, narrates from the point of view of her BLACK-ISH character, Rainbow, who is played as a child in the new series by Arika Himmel. MIXED-ISH chronicles the adventures of Bow’s family – siblings Johan (Ethan William Childress) and Santamonica (Mykal-Michelle Harris), and their parents, black mom Alicia (Tika Sumpter) and white dad Paul (Mark-Paul Gosselaar) – as they navigate the change from commune living to ‘80s suburbia.

Randall Keenan Winston, one of MIXED-ISH’s executive producers (his other credits include SCRUBS, COUGAR TOWN, GRACE AND FRANKIE, and ROSEANNE), tells us why he’s excited about working on the family comedy.

RANDALL KEENAN WINSTON: I have to be most excited about what I think is the number one new comedy, MIXED-ISH. Right now, it feels like such a great time to be on network. I feel like we’ve landed in a great place at the beginning of the year.

ASSIGNMENT X: To be on network as opposed to …?

WINSTON: As opposed to when you’re doing eight or ten or thirteen episodes on streaming. I love being on network. 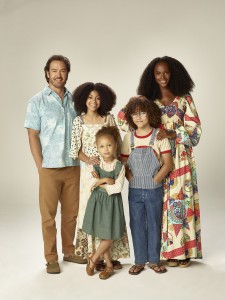 AX: Is it difficult to maintain the pace necessary to get all those episodes done, or it’s just fun?

WINSTON: Yes, it is difficult. But it’s fun. It can be both.

AX: What have you had the most fun doing on MIXED-ISH?

WINSTON: Well, in a first-season show, I think the building of the family is really the most fun. The writers – the execution of the writing side has been so amazing. Seeing that [writers’] room gel and find the stories that are specific to our show, and universal at the same time, seeing that come together. Seeing our cast, when we got the back-nine pickup, when everybody’s shoulders go down, and they play a little bit more on set. Seeing the kids get comfortable in their own skin, being on the show. I love all of that.

AX: In what we’ve seen so far, do you have a favorite episode or scene?

WINSTON: I love the MIXED-ISH hair episode. The line that Peter Saji wrote for the end of the episode, which is, “All hair is good hair,” I feel like just states it so beautifully about taking your otherness and championing it, and not letting yourself be judged by outside forces.

AX: Is there a MIXED-ISH character that’s particularly popped for you?

WINSTON: I can’t answer this [pick a single character]. I think it’s sort of in pairs. Seeing Mark-Paul and Tika as a couple is delicious. Mikal-Michelle Harris is a force. we’re going to be hearing from her for a long time. She is adorable, and smart, and she’s a true actress, and has great comic timing. Gary Cole [who plays Paul’s father, Harrison Jackson III] is such a professional. Christina Anthony [who plays Alicia’s sister, Denise] – she has exploded onto the scene, and she is creative, and improvisational and makes each little decision so funny, and she’s so good with all the cast. I think she raises it. 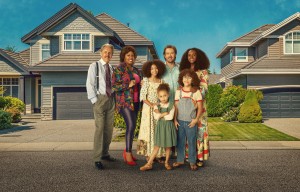 AX: And what would you most like people to know about the rest of this season of MIXED-ISH?

WINSTON: I would love them to know that we’re just hitting our stride, and we’re going to get better, and our family wants to stay.