The actor talks his leading role in the new spy series 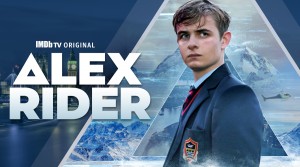 Alex Rider is the name of the hero of writer Anthony Horowitz’s phenomenally successful YA book series, which has sold a combined total of over twenty million copies all over the world.

Alex starts out as a normal London schoolboy being raised by his Uncle Ian. However, when Ian is killed on the job, Alex discovers to his shock that his relative wasn’t a banker, but rather a secret agent. The clandestine British government group that employed Ian presses Alex to go undercover for them, and soon he becomes a spy himself.

Now ALEX RIDER has been adapted by writer Guy Burt into a series that premieres in the U.S. on Friday, November 13, on both the free streaming service IMDBtv and its parent, Amazon Prime.

In ALEX RIDER, Otto Farrant plays the title role. Farrant, a twenty-three-year-old English actor, has other credits that include the films SALMON FISHING IN THE YEMEN and the 2010 remake of CLASH OF THE TITANS, and the miniseries THE WHITE QUEEN, WAR AND PEACE, and MRS. WILSON.

ASSIGNMENT X: Were you familiar with the Alex Rider books before you became involved with the TV project?

OTTO FARRANT: I was. I read the books when I was about eight or nine. I wasn’t a big reader when I was a kid as well, so it took a lot for me to pick up a book, but yeah. I idolized him as a kid, and so when I got the chance to play this role, it was like a dream come true.

FARRANT: For me, Alex in the books is, dare I say, a little bit more cocky in some ways. I think my Alex is a little bit more sensitive. There was a big conversation with, Andreas Prochaska, the director [of the pilot and Season 1 Episodes 2-4], early on about how we wanted to go down a route where Alex hasn’t had necessarily the love from his uncle in the same way that it’s portrayed in the books. Alex has sort of been starved of love, in some ways, growing up, so he’s a bit more closed off, and therefore a bit more sensitive and vulnerable, which for me, that’s what I would respond to, is that he’s the hero, but you’ve got to be able to question whether he’s going to make it through.

AX: When you auditioned for ALEX RIDER, or when you were working on it, did they tell you what they wanted from you, how they wanted you to approach the character?

FARRANT: I spoke to Andreas Prochaska a lot, and we had a great relationship where he told me that he wanted me to bring as much of myself to the role as possible. And I think that that was quite liberating for me, because I never tried to think of Alex as ALEX RIDER, the franchise that sells twenty million copies around the world. I always thought about it as me within the situation, and that freed me up in that way.

AX: At least in Season 1, Alex has a lot of different personas. He’s one way when we meet him and he seems like a normal teenager. Then he’s another way when he’s lying to his unofficial adult guardian Jack, who’s played by Ronke Adekoluejo, and his best friend Tom, who’s played by Brenock O’Connor. Then he’s different when he’s dealing with the spies that his uncle worked with, and another way dealing with the ultra-rich Friend family, and another way when he’s at the Point Blanc Academy for troubled adolescents. How many different personas do you feel Alex has, and were there any that were more fun or more difficult for you?

FARRANT: Alex has loads of different personas. I think one of his great qualities is, he’s adaptable. So, you watch him in different worlds throughout the series. Every episode, you’re in a different world, the spy world, or undercover, or Point Blanc, or back at [regular] school, and he has his own personality in those different roles that he adapts to. I would say the most fun one for me was hanging around with Tom, Brenock O’Connor, because we had a great relationship, so being at school and doing that stuff. But also being in Point Blanc, because Alex is a chameleon there. He’s the black sheep, isn’t he? He doesn’t quite fit in, because he’s got a mission. There was good fun to be had, and some great scenes where we’re dancing in the kitchen, there’s [soap] foam going everywhere. And the tone shifts quite drastically in a moment, which I quite like.

AX: Did you and Brenock O’Connor hang out a bit off-set to just get that sense of familiarity and friendship between you, or did you find that all as you were working on the scenes?

FARRANT: As soon as I met Brenock, I knew immediately that we have a very natural dialogue, and a care for one another. We’re really good friends first, and colleagues second. So, it was always great fun to play with him, and act with him. We just had great fun. It was all about being positive and laughing. We were laughing the whole time we were off-set. So, we hung out a lot before to prepare. We watched loads of movies together, and just got to know each other, really, just became mates.

AX: And with Ronke Adekoluejo, who plays Jack?

FARRANT: Yeah. Same thing. It was immediate from the moment I met her that I knew that we’d bounce off each other in a really natural and loving way. I think Jack is some of Alex’s strength. She’s such a strong character. She has a big personality, and she takes no prisoners, and I really love that, I love Ronke’s performance in the show.

AX: Did you have to learn how to do anything in order to play Alex, like handle a shotgun, or tuck and roll, or deal with enormous amounts of water being poured on top of you?

FARRANT: Yeah. I did this Krav Maga training for the role – Krav Maga is an Israeli self-defense [technique] – and we did one session where we did assault rolls, and the guy I was training with said, “You’re a natural assault roller.” So there you go. It was built into me [laughs]. So I did a bit of that, I did some Krav Maga, I did a lot of climbing, and I did, working with a personal trainer, running, cycling, swimming, general active stuff. Alex is very capable, and he can fight, so I just really wanted to be on top of that. And to add to that, this is a six-month shoot, so it’s grueling and it’s exhausting, so I just thought to be physically fit was really important.

AX: When you say “attack rolls,” does that mean you’re under attack and rolling away from your assailant, or you’re planning to roll into someone?

FARRANT: Well, Krav Maga would say that you’re never going to attack someone unless they’re attacking you. So, it’s only used in life-threatening situations. So, you’d be rolling away. But who knows? If someone was trying to take over the world with clones, then I’d definitely roll into them and hurt them [laughs].

AX: Did they teach you how to pace yourself as the lead actor during the long shoot?

FARRANT: Yeah, Andreas Prochaska said to me at the beginning, “This is a marathon, it’s not a sprint.” When you haven’t been through that process before, there’s no way you can know what it’s going to be like. There’s absolutely no way that you can imagine how exhausting it’s going to be, how much pressure there is going to be at times. But it’s also an environment that I thrive in, and I really adapt quite quickly to those situations. So, I loved rising to the challenge. I had great people around me to do that, as well.

AX: Where did you shoot ALEX RIDER? Was it in several different places, or did they just find one area that had all of these different geographies?

FARRANT: We were in Romania, and I got to fly around in a helicopter around the mountains, which was pretty cool. We mainly shot in and around London. So, for anyone in the States who hasn’t been to London and would love to see it, I think it’s a pretty authentic, gritty representation. It’s good.

AX: And what would you most like people to know about ALEX RIDER, the TV series?

Interview: Tyler Labine talks RISE OF THE APES and the fall of REAPER ...
TV Review: BONES – Season 10 – “The Life in the Light”
Movie Review: THE SNOWMAN
Movie Review: SCREAM