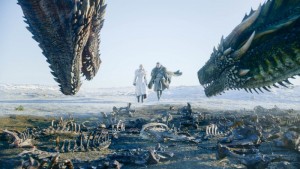 Yeah, winter is here, the end is here, whatever else has been said all over the place about the existence and premiere of the final season of GAME OF THRONES, we’re not going to try to outdo anybody else’s cleverness on that particular topic.

It’s telling what went into the “previously on” section of the “Winterfell” episode. As Season 8 of GAME OF THRONES opens, its makers would like us to be mindful of the following: 1) Queen Daenerys Targaryen (Emilia Clarke) has enforced a join or die policy that entailed having a couple of naysayers burned to death by one of her dragons. Though the recap doesn’t get into it, those naysayers are the father and older brother of Samwell Tarly (John Bradley), scholar and best friend of Jon Snow (Kit Harington). Jon is now Daenerys’s lover and good right hand. Sam is now at Jon’s ancestral home of Winterfell with Bran Stark (Isaac Hempstead-Wright) who has become the seer the Three-Eyed Raven. Sam and Bran both know that Jon is not actually Bran’s half-brother, but rather his cousin, the son of Prince Rhaegar Targaryen and the late Ned Stark’s late sister Lyanna, which makes Jon and not Daenerys next in line for the Iron Throne. (It also makes Daenerys and Jon aunt and nephew.) That’s a lot for 1), but it’s all related. 2) The living dead, led by the Night King, have killed and resurrected one of Daenerys’s dragons, which they’ve used to burn a huge hole through the Wall that previously separated zombies from Westeros. The dead (and their king, and the undead dragon) are now pouring through the hole the presumably kill every living thing in sight. 3) Queen Cersei (Lena Headey) in King’s Landing (way south of all of this) happily breaks her promise to send an army to defeat the dead. She figures all of her enemies will kill each other, and she’ll take out whoever is left at the end. Cersei’s brother (and lover) Ser Jaime (Nicolaj Coster-Waldau) disagrees and has headed north to join the cause.

On to Winterfell, the place and the episode. Daenerys, Jon and their entourage, including Tyrion Lannister (Peter Dinklage), spymaster Lord Varys (Conleth Hill), loyal Ser Jorah (Iain Glen), and Gendry (Joe Dempsie), bastard son of the late King Robert Baratheon and old pal of Arya Stark (Maisie Williams) all arrive at the gate. Sansa Stark (Sophie Turner) is decidedly not happy to meet Daenerys, but Bran says there’s no time for pleasantries – the dead are coming. Points to Bran.

Jon has a warm reunion with Arya; they still think they’re half-siblings. Arya doesn’t mention that she’s grown up to be an assassin. Sansa and ex-husband Tyrion have a more awkward reunion. She used to think he was the cleverest person alive; now she thinks he’s an idiot for imagining Cersei is going to send troops.

Sansa and Jon have an uneven private talk. She wants to know if he gave up his crown as King in the North for the good of the country, or because he’s in love with Daenerys.

Down in King’s Landing, Cersei reiterates her plans to basically betray everybody. Euron Greyjoy (Pilou Asbaek) has committed the fleet of the Iron Islands to her cause, aware that he can always sail away if she loses. Cersei finally gives in to his arrogant flirtation and has sex with him, possibly so that she can claim her unborn child (actually fathered by brother Jaime) is Euron’s and therefore not the product of incest.

Cersei also enlists her trusted right hand Qyburn (Anton Lesser) to approach freelance swordsman Bronn (Jerome Flynn) with a proposition. Bronn has been a friend to both Cersei’s brothers, Jaime and Tyrion. Should they survive the war in the North, Cersei wants to pay Bronn very well to kill them both. Bronn of course will take the money. Whether he’ll kill his friends (or whether he even gets the opportunity), we’ll have to wait and see.

While Euron is away from his ships, his nephew Theon (Alfie Allen) sneaks aboard with a group loyal to him. They rescue Theon’s sister and queen, Yara (Gemma Whelan). Yara reasons that the best thing they can do is go back to the Iron Islands. Euron can’t rule there if he’s got the fleet in Westeros, and if Daenerys loses the war in the North, the Iron Islands will be a safe refuge for her (assuming the dead don’t swim). Theon, however, longs to help out in the North (probably out of loyalty to Sansa), and Yara gives him her blessing to go.

This means that, of the characters we know, Yara Greyjoy may actually have the best chance of surviving the wars to come. Go, Yara!

Jon’s advisor Davos Seaworth (Liam Cunningham) tells Varys and Tyrion that somebody really ought to suggest to Daenerys and Jon that they should marry each other. It would be nice if Westeros could be ruled by good people for a change.

Daenerys’s two remaining dragons aren’t eating enough. She deduces they don’t like the North and need a good flight. She gets on Drogon, her favorite, and convinces Jon to ride Rhaegal. This is a rare bit of joy in the GAME OF THRONES universe, with Jon going from terror to delight as he soars through the skies. He’s also quite happy for some alone time with Daenerys.

In the foundry at Winterfell, Gendry and other smiths are hard at work, turning White Walker-killing dragonglass into weapons. Sandor Clegane (Rory McCann) is ungrateful for his axe. He’s also startled to see Arya, who left him for dead at their last encounter. They have a complicated relationship, to say the least, but seem guardedly pleased at each other’s survival. Arya and Gendry parted as friends, so they’re actually glad to see one another.

We see that Tormund Giantsbane (Kristofer Hivju) and Beric Dondarrion (Richard Dormer) have survived the collapse of the Wall. Yay! They run into a band of survivors from the Night’s Watch in a ruined great hall. The Night’s King has left a child nobleman pinned to the wall as a warning – and the boy resurrects while they’re there. They try to kill him with fire and he keeps screaming. Unpleasant for our guys and for us, too.

Sam saved Ser Jorah’s life back at the Citadel, curing him of the deadly disease greyscale. Daenerys is initially delighted to meet her champion’s savior, and Sam is pleased to meet the Queen. This is until conversation reveals that Daenerys executed Sam’s father and brother for treason. Sam begs the Queen’s partdon and retreats in tears.

Then Sam encounters Bran, who insists that Sam be the one to inform Jon of Jon’s true parentage. Sam has been hiding from Jon, since he hadn’t known how to deal with the secret. Now Sam seeks Jon out in the tomb of Winterfell. Sam asks if Jon would have killed Sam’s father and brother. Jon responds that he’s executed men for treason. Sam replies that Jon has also spared men, too. Jon says he wasn’t king. This gives Sam an opening. In fact, Jon is the King – not King in the North, but Ruler of the Seven Kingdoms. Sam goes through the family exposition.

Jon is stunned. Ned Stark, who he calls the most honorable man he’s ever known and who Jon knew as his father, turned out to have lied to Jon his whole life (Sam explains this was to honor the promise Ned made to Lyanna to protect her son). Jon’s beloved Daenerys is his aunt. The Targaryens are comfortable with incest, but Jon wasn’t raised as a Targaryen. Oh, yeah, and he’s the King. Holy dragons, Snowman! Sam points out that Jon set aside his crown as King in the North for the good of the whole land. Will Daenerys set aside her crown for the same cause, or will she cling to it? Great question.

Jaime Lannister makes it to Winterfell, and promptly sees Bran. Since Jaime shoved Bran out a high window way back when Bran, then a boy, saw Jaime and Cersei making love, this is awkward.

As we know, the incident crippled Bran. Since Bran is now a seer, who has repeatedly expressed impatience with everybody else’s emotions, it may be that he’s not out for vengeance. Bran doesn’t need to be – Jaime is so conflicted and miserable that his chances of survival are probably lower than most of the other characters (even if Bronn doesn’t take him out).

“Winterfell” is one of those GAME OF THRONES episodes that’s primarily about setting up the chess board. The dragons flying sequence provides a mood of exuberance that’s unusual here, but after seven years, momentary high spirits seem warranted.

GAME OF THRONES is also notable for being a series where exposition scenes are full of suspense and drama, not because we’re wondering what will be revealed – we’re often way ahead of the characters – but because we don’t know how anyone will react to the information, or even to giving the revelation. Not many shows can pull this off, but it’s part of GAME’s essence. It’s one of the many reasons this is so impressive.