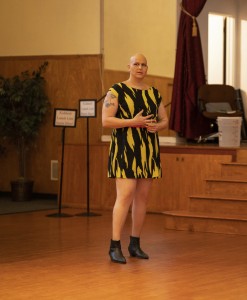 TRANSPARENT celebrates its ending by doing its fifth season as a single 100-minute musical movie, the TRANSPARENT MUSICALE FINALE, now available on Amazon Prime. Created by Jill Soloway, TRANSPARENT tells the story of the complicated Pfefferman family in Los Angeles, and the impact on everyone when the erstwhile patriarch, played by Jeffrey Tambor, comes out as transgender, now to be known as Maura.

TRANSPARENT picked up Emmys and Golden Globes in multiple categories in its first four seasons, 2014-2017. It had been picked up for a fifth season when two people accused Tambor of sexual harassment. He has denied the accusations, but it ended his association with TRANSPARENT, and cast the show’s future into doubt.

Then Soloway, who identifies as non-binary, and their sister Faith Soloway came up with the idea of TRANSPARENT MUSICALE FINALE. Faith Soloway had already been writing songs set in the TRANSPARENT universe that were performed in Joe’s Pub in New York, featuring a sizable cast that included Shakina Nayfack.

Nayfack, a transgender woman who founded her own New York company, the Musical Theater Factory, or MTF (the abbreviation also stands for male-to-female), has now joined Amazon’s onscreen TRANSPARENT cast for its finale.

At a Q&A session for TRANSPARENT, Nayfack’s colleagues sing her praises (well, not literally – which, since the finale is musical, they could have done) and Nayfack talks about her connection with the series. Later, she follows up with a one-on-one conversation. 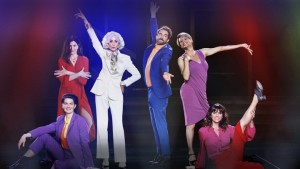 Everyone on the panel is thrilled to have Nayfack as a colleague. Jill Soloway says, “You’ll see in the credits that it says, ‘And introducing Shakina Nayfack,’ and we are so filled up with joy and excitement to have a member of our family like Shakina. We feel like we’ve been waiting for her for a long time.”

Adds Amy Landecker, who plays Sarah Pfefferman, “[Nayfack] has this unbelievable voice, and there were these other Broadway singers, but we were in her rehearsal space, and it felt very profound. Shakina coming in as a spiritual …”

“I’ll take it,” Nayfack says with a laugh. “North Star or Marilyn Monroe.”

“I definitely want you to talk, but I’ll just sort of set this up,” Jill Soloway says. “As you all know, in that time that, a year ago in New York, when we met in June, and we were just holding space, a little bit like camp, going “How do we move forward?”, we knew that Shakina was an amazing musical theatre creator, and she has a workshop space in New York called MTF, Musical Theater Factory, and she’s an amazing creator in her own right …” 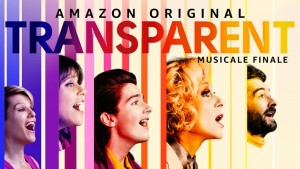 “And also MTF,” Jill Soloway agrees. “Over the past few years, we had been talking about where the camera goes. We would say to Jim Frohna, the cinematographer, the camera is Shelley, or the camera is Sarah, or the camera is Ali, and sometimes when we didn’t have a person who the scene belonged to, and we just wanted it to belong to the goddess, or the world, we would call it Shakina cam. So we would say this shot is Shakina cam, and for those of you who are Jewish, you know that shekinah means ‘the divine feminine.’ So we would sort of mean goddess cam. And then as we were starting to write this season, and part of the season was that Shelly casts her own version of the family, and we were looking for our new North Star, and we met Shakina Nayfack, who is a Jewess, and who is a musical theatre superstar, and who really guided us in believing that we could believe in something again. I know we always seem like we’re on this kind of spiritual journey here at TRANSPARENT, it feels like so much more than a TV show for us, but I just want to let you speak a little bit about your journey and how we found you.”

“I’ve obviously been a fan of the show from the beginning,” Nayfack says, “but I was on the outside, being like, ‘Hey, I’m over here in New York whenever you need me.’ And I started Musical Theater Factory around the same time that TRANSPARENT began. At that time, I felt like there was no room in the world for me as an actress, so I should just focus on directing and producing, which I also love doing, and writing. And this show and these creators cracked that open, making room for me to imagine myself as an actress, and then I was on this show, DIFFICULT PEOPLE, on Hulu for a couple of years, but running this musical theatre company in New York at the same time. And I originally connected with Faith because I was singing at a benefit for the Gender Family Project, which is an organization that does service work for families with gender nonconforming and trans kids, and they were honoring the Soloways. We met, and you [Faith Soloway] were like, ‘I’m thinking of making TRANSPARENT a musical.’ And I was like, ‘I’ve heard that before, because everyone in New York is thinking about making something a musical.’ But then a year later, it really was a year, [Faith Soloway] reached out to me and [said], ‘Oh, I think we’re going to do some of the songs at Joe’s Pub. Do you want to come?’ I said, ‘Yes.’ And then we met at that first rehearsal, but the decision to do that weeklong workshop at Musical Theater Factory was really a game changer, I think, for figuring out how this story and this family could coalesce around the death of one of their matriarchs, and how we could chart a healing journey for all of these characters that, really, the world has fallen in love with over the past few years. We had some very sacred time there. The improvisation, the community of it was definitely part of the engine of the creation, but also, it was the first time that the cast had been together since the great rupture of 2017. And so it was crazy, because I’m new to the family, and was welcoming everyone into my home, while they were welcoming me into their family. So it was really special, a really pivotal moment.” 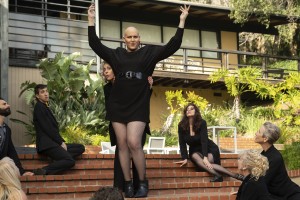 Nayfack continues, “Also, can I add, as the outsider coming into this family that had experienced this grief, even before we decided that Maura was going to die in the first minutes of the film, the grief in the ensemble of the community was palpable, but so was the decision to, as Jill said, move toward joy. And I think everyone in every position on the project had an agreement that we spoke aloud, often, frequently, before every day of shooting, that this show has literally changed and saved lives. And there’s so much magic and opportunity that’s been created by this show the last couple years that if we were to let it go down because of an unfortunate event, we’d be taking that away from everybody, especially the trans folk who need this representation, who need these jobs. And so the commitment to keep going and push through the fire and create something truly celebratory was shared and was there from the beginning.”

ASSIGNMENT X: Who are you playing in TRANSPARENT: THE MUSICALE FINALE?

SHAKINA NAYFACK: I’m playing a character named Ava. She’s a new character in the show, and she arrives into the Pfefferman family’s lives and helps them through their grief. I don’t want to give too much away, but I come into the family through befriending Ali Pfefferman [played by Gaby Hoffman], and then audition for Shelly’s play.

AX: Are you getting to preview any of this at your MTF theatre?

NAYFACK: I hope that we’ll find something to do with Musical Theater Factory, and Amazon, when we get back in New York, but we don’t have plans yet, but I’m sure we’ll do something. We definitely take a lot of pride in having helped be part of the process.

AX: At the MTF, do you do material that’s specific to the transgender community, or is it all sorts of things?

NAYFACK: It’s all sorts of things. Our biggest show [has been] Michael R. Jackson’s A STRANGE LOOP, which has been playing at Playwrights Horizons all summer. And then I created my solo show, MANIFEST P*SSY, which is my autobiographical rock odyssey. I created that with a bunch of composers through Musical Theatre Factory. So we really focus on creating new musical theatre that centers on marginalized identities, so we’re telling stories through musical theatre that don’t often get space to be told in musical theatre.

AX: Do you feel like the cultural storytelling around being transgender has improved, that trans people are being depicted more holistically, and not just as either tragic or impossibly daffy?

AX: It’s sort of like, they went to Yale, and that’s how they got the job they have now, but the story is not about going to Yale.

AX: And what would you most like people to know about the TRANSPARENT MUSICALE FINALE?

NAYFACK: I think something that is fun to know is that there are tons of Easter eggs for the diehard TRANSPARENT fans. You’re going to see so many people that you love from past seasons showing up. And then there are some great surprises from Ava, too, my character.