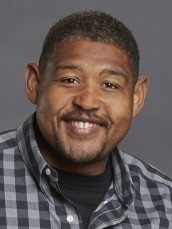 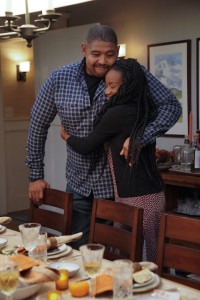 In CBS’s new Thursday-night half-hour comedy THE UNICORN, Walter Goggins stars as Wade Felton, a widowed father of two who is tentatively getting into the dating scene for the first time in his adult life.

Omar Benson Miller plays Ben, one of Wade’s best friends, a married father of four encouraging Wade’s romantic adventures. At the same time, Miller also has regular roles on HBO’s sports comedy BALLERS and (as a voice) Nickelodeon’s RISE OF THE TEENAGE MUTANT NINJA TURTLES. Miller, a Los Angeles native, was previously a series regular on CSI: MIAMI. His feature credits include 8 MILE, THINGS WE LOST IN THE FIRE, the title role in GORDON GLASS, MIRACLE AT ST. ANNA, HOMEFRONT, and ABOVE SUSPICION.

ASSIGNMENT X: You look a little bit younger than your cast mates on THE UNICORN. Are you actually playing older for the character?

OMAR BENSON MILLER: You know what’s funny? This is why I grew my goatee and my moustache, so nobody would feel uncomfortable [laughs]. I’m the same age as a lot of them, I’m forty years old, but thank God, I’ve got great genes, I hydrate, and I get a lot of late twenties and early thirties [characters]. If I cut my mustache, forget about it – I look like a kid. I’m full of life. And I look like my mama. That helps.

AX: Is THE UNICORN single-camera or multi-camera?

MILLER: This is single-camera. I’m on another single-camera show, BALLERS, so the format isn’t much different for me. I actually think for this particular show, for what we’re going for, this format works better. Like Rob [Corddry, who plays Wade and Ben’s friend Forrest] said, the multi-cam schedule is the best schedule in all of Hollywood. I’ve never been blessed to get to do it, but I hear you work literally about five hours a week. But this is great. I feel good, I feel comfortable and confident about what we’re doing. People seem to really identify with these characters on THE UNICORN. Walton’s a great Number One. We did a film together, eleven years ago now, called MIRACLE AT ST. ANNA, all over Italy, Spike Lee’s war film. So when this came across my desk, I was looking forward to it. Because Walton’s aces. 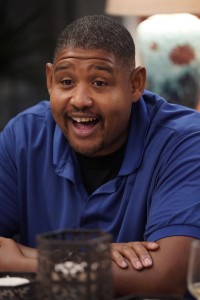 AX: Were you one of the people Walton Goggins says he called directly and said, “Come be on my show, THE UNICORN”?

MILLER: No. CBS called me, but they called me heavily dropping Walton’s name, knowing that Walton and I had worked together before. So that was a good sign.

AX: How do you enjoy playing opposite Maya Lynne Robinson, who plays Ben’s wife Michelle?

MILLER: Oh, she’s great. I’ve never worked with her before. Some of the other people in the cast I have more of a history with, so this has been an interesting experience. She’s eager to support and to shine, and it’s great. So we’re there with each other, and with a cast with this much talent, including her, the sky is the limit. I just hope we get there.

AX: Do you feel like Ben is afraid that Wade is going to collapse without a woman in his life?

MILLER: No. I don’t think that. I think it’s just the natural symbiotic nature of biology that nobody’s meant to be alone. So we’re doing what we can to push our friend into recognizing his greatness, and to get back in life, and find a partner.

AX: Now, on BALLERS, your character Charles Greane really is younger than you are.

MILLER: [laughs] It’s great, because between BALLERS and THE UNICORN, they’re totally different worlds. And I also do the voice of a Teenage Mutant Ninja Turtle on the weekends.

AX: Which Turtle are you?

MILLER: I’m Raphael. I get to play the fun, popular one. And with that, I’m really blessed as an actor. I’m in a position that, when I first started acting after I was playing baseball in college, this was the goal, to reach this point. So now I’ve got to make some new goals, because this is great. I’m on three different television shows at the same time. It’s great.

AX: I would imagine animation has a nice work schedule, too.

MILLER: Pretty sweet. But it’s taxing, because you work for a long period in a day, but you only have so much capacity, because, especially for a cartoon, we’re yelling and stuff, your voice can only do so much.

AX: Do you do anything special to sound like a turtle?

MILLER: Oh, yeah. I mix it up. I mix it up big-time. But what I do is, I draw on my experience from when I was a kid. I used to sing the TEENAGE MUTANT NINJA TURTLE theme song on the way to school when I was a kid. So now, being one of them – if old me could tell young me this was going to happen, I’d think, “Man, life is working out.” 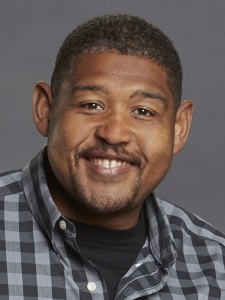 AX: Have you developed any kind of fondness for actual turtles?

MILLER: Let me tell you something. I think that honestly, we are all connected. All of the species are connected, which is why it’s so important for us as humans to take advantage and to take responsibility for our place on the totem pole. And unfortunately, we don’t seem to be doing the best job of it, and everybody’s fate depends on the choices that we make. It’s like those [Masaru Emoto] experiments, where he yells expletives at the ice. If you just yell at frozen water in negative ways, the ice will make all these ugly shapes. And yet, if you speak kindly to it, it makes beautiful shapes. It’s bizarre, the connectivity. It’s kind of paranormal, but that’s a whole other conversation.

AX: Between these three shows – THE UNICORN, BALLERS, and TEENAGE MUTANT NINJA TURTLES – do you have to really take time to switch gears between them, or do you just have to gear up spontaneously, or …?

MILLER: Both. [In July] I did a month of travel to just reset and refresh myself, and that’s how I’m able to do a day’s worth of interviews and then roll into months’ worth of shooting and voice recording. So you have to have stamina for this thing.

AX: And do the schedules work out so you’re not having to run from one set to the other?

MILLER: Sometimes. Contractually, they all worked it out and played nice so that I can do all this stuff. I’m really grateful to HBO, CBS, and Nickelodeon for playing nice with each other.

MILLER: I have a pet project that’s my own that I do for fun, which is called THE OZONE PODCAST, and it is a conversation between me and my older brother about sports. It’s the best.

AX: And what would you most like people to know about THE UNICORN?

MILLER: That this is a show that you’ll be able to relate to and identify with, that potentially could actually lift your spirits, because we all have to deal with loss and progress in our lives at various points, so if you haven’t gone through it yet, you will. This show can help to prepare you for that.