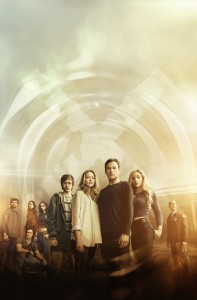 In Season 2 of Fox’s MARVEL’S THE GIFTED on Tuesday nights, the factions of superpowered mutants and non-powered but armed humans have multiplied. In the series created by Matt Nix, set in the X-MEN universe, we still have the Mutant Underground, mutants who are trying to keep the peace, and Sentinel Services, the human government arm tasked with suppressing any mutant activity deemed suspicious. Now there’s also the militant mutant group the Inner Circle, which wants to dominate or entirely eradicate regular humans, the violently anti-mutant human cadre the Purifiers, and the literally underground mutant community of Morlocks.

Stuck in the midst of all of this is the Strucker family. Reed Strucker (Stephen Moyer) started out as a prosecutor who handled mutant cases; wife Caitlin (Amy Acker) was and is still a nurse. Then their two adolescent children, Lauren (Natalie Alyn Lind) and Andy (Percy Hynes White), both turned out to have potent mutant powers, which sent the family on the run. Since then, they’ve joined the Mutant Underground, but Andy broke away and has gone over to the Inner Circle. Meanwhile, Reed has discovered that his own mutant powers, medically suppressed by his father when he was a child, have returned uncontrollably.

That’s a lot for the writing staff to juggle, and we haven’t even mentioned the romances, alliances and betrayals. Executive producer/writer Melinda Hsu Taylor, whose previous credits include LOST, THE VAMPIRE DIARIES, FALLING SKIES, and TOUCH, fills us in on what’s going on in THE GIFTED Season 2.

ASSIGNMENT X: What can you tease for us in Season 2?

MELINDA HSU TAYLOR: We have deep comic book pulls – if you’re a big fan of the [X-MEN] comics, you’ll recognize some of our characters coming down the line. I also think we’re going to try a little more engaged with our fans over social media, so I would just keep an eye out for fun things coming on our Twitter account.

AX: Speaking of characters to watch out for, will we see Sharon Gless as Reed’s mother Ellen again?

TAYLOR: I don’t know that. That I would not be able to say.

AX: Although it has a lot of characters taken from various X-MEN comic books, THE GIFTED itself didn’t start out as a comic book. Is it a comic book now?

TAYLOR: There’s been talk about a possible comic book tie-in, but I don’t have any details on that.

AX: Is the composition of THE GIFTED writers’ room still pretty much what it was in Season 1, or has it shifted around?

TAYLOR: We have some new faces, and other folks have moved on to do other projects, but we’re really excited about the team.

AX: Sometimes the Marvel Cinematic Universe impacts the Marvel television universe. Do you have any characters suddenly disintegrating and blowing away in puffs of smoke?

TAYLOR: No. We’re not in that world. 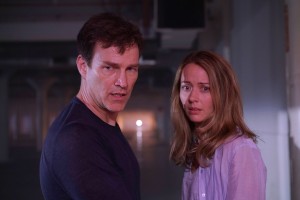 AX: So your people are not too worried about what’s going on with the AVENGERS-verse?

TAYLOR: No. I think that’s fair to say.

AX: Not asking for upcoming spoilers, but do you have any favorite scenes or favorite episodes from Season 1?

TAYLOR: I really enjoyed all the romantic stuff. I’m quite a romantic at heart. Anything to do with couples, or kissing, or longing looks, I’m a big fan of all that stuff. I love the Eclipse [Sean Teale] and Polaris {Emma Dumont] Aurora Borealis. That continues to be something that’s important and kind of the heart of the show. I love the stuff between Reed and Caitlin as a married couple, and them struggling to find their footing as parents, especially in this crazy circumstance.

AX: Were there any plotlines that you had to curtail because they weren’t going in the right direction?

TAYLOR: Sometimes you feel like, “Oh, wouldn’t this be amazing, if we had thought of it ten episodes ago? Maybe we’ll do that in Season 3” kind of thing. So I think part of what’s fun about writing is also the thing that you have to sacrifice some of your darlings sometimes. You get in your own room with your computer, and you think, “Oh, I’ve spun out all these stories.” And then you realize, “Oh, that contradicts this other thing we’re trying to do.” But from that brainstorming time that you spent, you might find little nuggets or feelings that you want to translate into what you are doing. So I feel like all of that time is really well spent, even if you’re spinning something in your head that doesn’t make it onto screen this season, maybe it’s a germ of an idea for something down the line.

TAYLOR: I feel like it has a lot of social relevance. It did last year. The social relevance of it – personally, I’m really excited that we’re going to be able to do some real outreach. There’s a refugee school in Decatur called the Global Village Project that we’ve reached out to, and we want to talk to their students and their community members, and look at the real-world ramification of the sort of stories that we tell, where people are disenfranchised and marginalized and seen as the Other, and isn’t there a way where we can all be inclusive and tell stories about what people bring to a community, even if they come from outside of it?

This interview was conducted at Fox Networks’ part for the Television Critics Association (TCA) press tour.