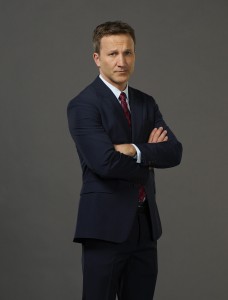 Based on a novel by former prosecutor Marcia Clark, ABC’s new Monday-night drama THE FIX follows one particular investigation. Eight years ago, Los Angeles assistant district attorney Maya Travis (Robin Tunney) lost a double homicide case when she prosecuted celebrity Sevvy Johnson (Adewale Akinnuoye-Agbaje). (Any resemblance to Clark’s prosecution of O.J. Simpson is strictly intentional.) Now Sevvy may have commited a new murder, and even though Maya walked away from the legal profession after the earlier case, she’s back to take him on again.

Breckin Meyer plays Maya’s boss, district attorney Alan Wiest. This isn’t Meyer’s first time at the bar – he spent four years as lawyer Jared Franklin on the legal dramedy FRANKLIN & BASH. More recently, the Minnesota native was a regular on DESIGNATED SURVIVOR. As a writer, Meyer has been nominated for multiple animation-scripting Emmys as part of the staff on ROBOT CHICKEN. He also created and produced the comedy series MEN AT WORK.

ASSIGNMENT X: So in THE FIX, you’re playing a lawyer again …

AX: Is this show giving you any flashbacks to FRANKLIN & BASH?

MEYER: No. I didn’t have to do as much research as I normally would, because I’d already played a lawyer a few times, and so I was pretty well-versed with this. But it was fine. I was glad to get back on this [acting] side of it.

AX: Are you developing an affection for practitioners of the law, or do you have any theories about why you’re cast this way?

MEYER: I don’t know why. I haven’t played a lawyer too many times, but my stepdad is a lawyer. I don’t think that has anything to do with it, but it helps me with research.

AX: What is your character’s view of the old murder case and the new murder case?

MEYER: He’s definitely very happy that he has risen in the ranks since then, since eight years ago, and now he’s the D.A. But with that comes the challenge of, he wants to go by the book. So Maya flying off the handle with this [like a] dog with a bone, so to speak, drives him crazy, because it makes headaches for him. Because I’ve got the mayor calling me, pissed off about things she’s saying in the press. At the same time, I want justice, but I also want it the correct way, and also selfishly, my character has got his eye on being mayor. If this goes well, great. If it goes bad, then he’s screwed. 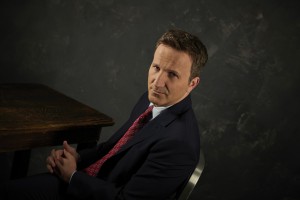 AX: For a number of years now, you’ve been bouncing back and forth between acting and writing and producing. Was there a consideration of, “Do I want to be acting right now? Would I rather be producing?”

MEYER: No, it was a conscious decision. I was writing – we just finished our tenth season of ROBOT CHICKEN, and I was excited to act again. I was doing DESIGNATED SURVIVOR at the time, and I was having fun, and I called my agent and said, “I want to keep doing this for a bit. I’ll still write ROBOT, but I’m going to put it on hold for a little bit and focus on acting.” Robin and I worked together in THE CRAFT twenty years ago, so it’s pretty fun.

AX: And now you’re working for the Craft – that is, THE FIX executive producer Elizabeth Craft, who co-created the show with her fellow exec producers Sarah Fain and Marcia Clark.

MEYER: And now we’re working for the Craft.

AX: How is being part of an ensemble, versus being one of the two leads?

MEYER: I like it. I mean, I like them both, but specifically, I was actually looking for an ensemble. Even with FRANKLIN & BASH, even though we [Meyer and Mark-Paul Gosselaar] were the title characters, that was an ensemble. That was me and M.P. and Reed [Diamond] and Malcolm [McDowell] and Garcelle [Beauvais] and Rhea Seehorn and everybody. So I always feel better in an ensemble, because I like playing with a group.

MEYER: Just to check it out. I would want people to sample it. I think it’s pretty interesting. It’s not like any of the dramas I’ve seen on network TV. With the ten-episode [Season 1] run, what I really like is there is a definitive ending. As opposed to some shows where, even if you love them, by the second season, you’re like, “What is this thing? What is this maguffin they keep telling me about, whether it’s LOST, and you want to know what’s in the hatch, and what is the island? What is the smoke monster? What’s the polar bear?” All that stuff. With this, no matter what, there is a definitive ending after ten episodes, which I think is a rewarding thing for people to stick with it is, it’s a shorter run in the sense that it’s only ten, but you get a solid ending, and then it’s honestly kind of a throwback. It’s almost like an anthology, because next season will be a totally different crime, totally different case, which is exciting to me as an actor, that we’re not just doing the same stuff over and over again.

This interview was conducted during ABC’s portion of the Winter 2019 Television Critics Association press tour.