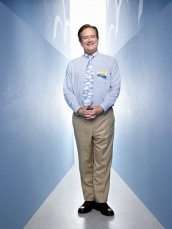 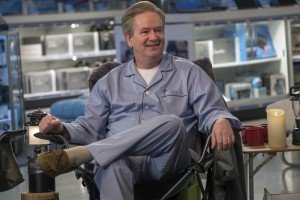 In NBC’s half-hour comedy SUPERSTORE, now nearing its fourth-season finale Thursday night and renewed for a fifth year, Mark McKinney plays Cloud Nine manager Glenn. Glenn is ever-optimistic as he runs the big box store, although he’s not quite as effective as he likes to imagine he is.

McKinney, originally from Ottawa, Canada, was part of the original cast of the sketch comedy series THE KIDS IN THE HALL, and then went on to do two stints (1985-1990 and 1995-1997) on SATURDAY NIGHT LIVE. His other credits include DICE, the cult series about a theatrical rep company SLINGS AND ARROWS, STUDIO 60 ON THE SUNSET STRIP, and MAN SEEKING WOMAN. McKinney also has branched out into directing with an episode of this season’s SUPERSTORE.

ASSIGNMENT X: When you first became involved with SUPERSTORE, did you envision that it was going to have this kind of longevity, or was it more just, “This looks like fun”?

MARK McKINNEY: It looked like fun. It definitely looked like fun. It was an amazing script, and right from the jump, when we [the actors] all sat down to read the pilot, having never met each other, ever, it was one of the true amazing moments in my career, how we jelled. I’m not a student of, “Oh, it’ll run,” but I have friends who study the business and said, “I think you guys are going to be going to be on for a long time.”

AX: Was Glenn’s character something that you’d done something a version of before, maybe in improv?

McKINNEY: I’d done a very dour version of this character a few years earlier in a friend’s film, but he was very serious and didn’t laugh. So it was really the voice that I just sort of transplanted, of going up an octave, or whatever it is that I do. But to imbue him with an endless optimism was really new and fun.

AX: Do you have to psych yourself up in the mornings to get to Glenn’s energy level?

McKINNEY: No, because I have to say, I have not spent a lot of time in Los Angeles, so the thrill of driving through the gates of Universal, to work with people I like, on a script that is obviously funny, hasn’t worn out yet. So there’s no psyching up. I just show up. And at this point in my career, I think I wanted to play something really silly. The last thing I was doing, we were sort of serious. 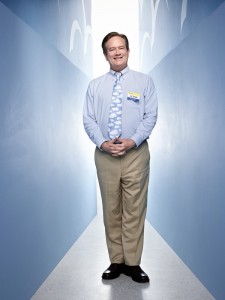 AX: Glenn sees himself more as a leader than perhaps the people he’s leading see him …

AX: Is there anything different in playing someone who thinks he’s a leader, as opposed to someone who knows he isn’t?

McKINNEY: Well, he thinks he’s a leader, but I think he’s been checkmated enough times that he’s always on the lookout for where he might be wrong. The first thing you want to up if you’re playing a clueless leader is the cluelessness, because then that makes it credible. But he’s retained a smidgen of wisdom and an enormous amount of heart, and that all balances out for me.

AX: Do you have a favorite line of Glenn’s?

McKINNEY: We improvised a song – “The finger of the Devil is poking through the foam.” But there’s a lot of stuff. The stuff where he’s saying [when he’s told half of people like something], “Wait. Half do, or half don’t?” “Both.” “Both?” And he can’t put it together.

AX: Have you had any SUPERSTORE-like experiences when you’ve been out shopping in real life?

McKINNEY: At Ralph’s [supermarket], near the studio, I literally met Glenn.

McKINNEY: Pretty much. Tall, really happy, and he spent ten minutes – it was an insanely busy day, and he took the time to explain, “This is how the Ralph’s gas coupon works.”

AX: Do you have a favorite type of scene you get to do in SUPERSTORE?

McKINNEY: Our favorite thing to do as a cast is the break-room scenes. It’s kind of the weekly reunion. It’s when we get to check in with each other. One of the great strengths of this cast is, we really, genuinely like each other, find each other funny. So that is how we get the energy to get through all those scenes, which have to be covered from multiple angles. That’s actually usually our favorite part of the week.

AX: And what would you most like people to know about Season 4 of SUPERSTORE?

McKINNEY: Season 4? It may be the best season yet. Everyone has settled in, and the episodes have been fantastic, and already, there have been two or three that are already my favorites.

Related: Interview with Nico Santos on season 4 of SUPERSTORE