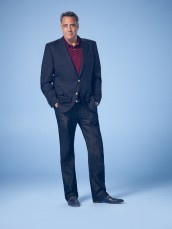 The actor talks his return to half-hour comedy 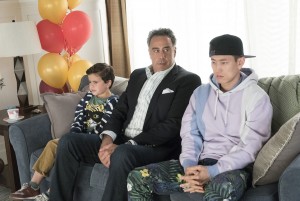 Brad Garrett plays Douglas Fogerty, one of the title characters in ABC’s Wednesday-night freshman comedy SINGLE PARENTS. A widower with twin daughters, Garrett’s Douglas is part of an informal community brought together by their children’s school. Unlike his fellow single parents, Douglas does not plan his life around his kids; instead, he treats them somewhat as employees.

Garrett is extremely familiar with the half-hour comedy form, having won three Supporting Actor Emmys for his portrayal of Robert Barone during his nine years with EVERYBODY LOVES RAYMOND. Garrett followed up that series by starring in another half-hour, TIL DEATH, which ran for four seasons. Recently, the L.A. native has been doing guest arcs on some dramas, including FARGO and I’M DYING UP HERE.

ASSIGNMENT X: Your character Douglas seems to have a slightly different relationship with his kids than the other single parents do with their children.

AX: Even though most of the other people don’t want to be in the position of being in charge of the group, they’re all very oriented towards their kids, whereas Douglas’s kids seem to be oriented towards him …

GARRETT: That’s really what it is. There are a lot of parents that sometimes have kids as accessories. And sometimes the kids end up raising the parents, which I think is what’s going to happen one day with Doug. But yeah, he’s not a great parent. There are a lot of parents out there that probably should have had cats. And he may be one of them, though I think they’re going to be able to find his heart eventually. 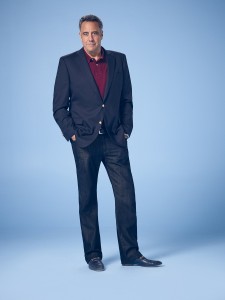 AX: In the pilot, Douglas winds up dancing with the little boy Graham, played by Tyler Wladis, in order to comfort the child. You’re six-foot-eight-and-a-half, and the Tyler Wladis is the normal height of a child. Was that difficult to do because of the height difference?

GARRETT: Well, I’m used to being a giant. That’s why near the end I lifted him up, because it was easier. And then I forgot I have a bad lower back. So that was a thing. But this is all stuff that fuels my character anyway.

AX: You’ve been doing dramatic guest turns for a little while. How does it feel being back as part of a comedic ensemble?

GARRETT: Well, I started in ensemble, and I’m loving it. Some of the best comedies are ensembles, and I’m just very proud to be part of it. I’m grateful to still be working and doing what I love, and it’s great to be the old guy on the set for once. Because I have a ton of excuses not to hang out. And I have ailments. 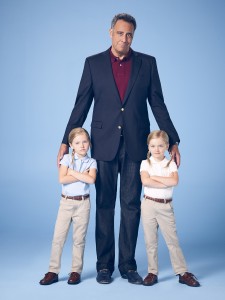 AX: Do you still have your Brad Garrett’s Comedy Club in Las Vegas?

GARRETT: I sure do. It’s at the MGM. We just celebrated six years, and I go out there about two, three times a month, and I host shows, and bring in different people. It’s a lot of fun.

GARRETT: I actually just finished an independent film called GLORIA BELL, where I play Julianne Moore’s ex-husband, and it’s with John Turturro, and Michael Cera, and I’m excited about that. It’s coming out early 2019.

AX: And what would you most like people to know about SINGLE PARENTS?

GARRETT: It’s a funny show, it’s a family show, with a little edge – like our families. We’ve got a little edge, But I love the truth about it. And we’re going to take on some subjects that I’m excited about. I think it’s great to have a show that really represents a very large part of the population that we haven’t seen a lot about, and that’s single parents. I would say it’s probably one in three in our world that are single parents. And it’s funny and it’s realistic and it’s a great group, and it all comes down to the writing, and we’re having a great time, and the show runners are great.