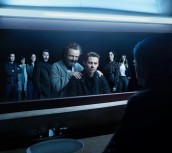 The creators talk about their new Fox show 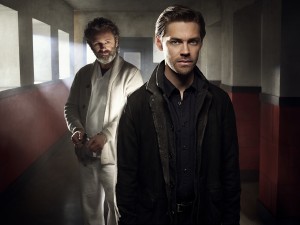 Fox Network’s Monday-night thriller series PRODIGAL SON is the creation of executive producers/show runners Chris Fedak and Sam Sklaver. The title of PRODIGAL SON refers to NYPD homicide consultant, profiler Malcolm Bright (Tom Payne). Malcolm has a lot of deep-rooted psychological problems stemming from the fact that his father, Martin Whitly (Michael Sheen), is a prolific serial killer, now incarcerated in a mental institution. Malcolm’s problems get worse when he finds that the best way to solve cases is often to consult Dad. Adding to the level of difficulty are Malcolm’s horrified, wealthy mother Jessica (Bellamy Young) and his ambitious TV journalist sister Ainsley (Halston Sage).

Fedak (pronounced FEE-dak) previously created the series CHUCK, with Josh Schwartz, and DECEPTION. He was also a writer/producer on FOREVER and DC’S LEGENDS OF TOMORROW. Sklaver’s writing/producing credits include BORED TO DEATH, BEN AND KATE, MARRIED, BLUNT TALK, AMERICAN HOUSEWIFE, and RYAN HANSEN SOLVES CRIMES ON TELEVISION, as well as being a writer/producer on Fedak’s DECEPTION.

Sklaver (rhymes with “waver”) is only able to speak with us briefly before having to leave to catch a plane. Fortunately, Fedak is able to remain longer.

ASSIGNMENT X: How did the two of you come together to write PRODIGAL SON?

SAM SKLAVER: Two years ago, I had a half-hour comedy [premise that didn’t sell]. He had an hour-long drama, DECEPTION, at ABC. I met with him about working on it. So Chris and I worked together on DECEPTION, and then after that ended, a little too soon, we knew we enjoyed writing together enough to really want to get into it again, and that’s when we started trying to develop PRODIGAL SON.

AX: So you found that you had …

CHRIS FEDAK: Rapport. I think that one of the things about when you’re running a show, it’s an impossible job. So to have a partner, to have somebody to work on the show with you, is great. We just sat down together after DECEPTION was done, and we were like, “What else can we figure out?” And this show came out of a conversation. And it was exciting. It’s fun to make up an idea and then [decide], “That’s a show.” 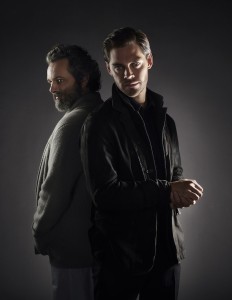 AX: How was writing the pilot script?

CHRIS FEDAK: We wrote it together. Sam comes from comedy, so we actually will open it up, put the script up on a monitor, and write it like that. Now we have a writing staff, so it’s always a collaborative process.

AX: Is there a clinical diagnosis for Martin? Is he a psychopath?

SKLAVER: Does Chris want to speak to this? I always get it wrong.

FEDAK: He’s a psychopath. This is the discussion. Some people might say [Martin is a sociopath], but he would be diagnosed as a psychopath. It’s like, Bright goes back and forth. Sometimes it’s a matter of, a psychopath is a more damning portrait, so I think that for Bright, you can see him sometimes struggling with that diagnosis.

AX: Did you do any research into either psychopaths or police procedure or anything else?

FEDAK: Well, first off, we have consultants and experts in psychology, the BAU, the NYPD, and also for a medical examiner. We’re always using those guys, because they have great stories. The second part of it is, for us, we started from the place of, what would it look like from just a family drama perspective? And really the first thing we lasered into was complex PTSD. And that’s where we started, and we built from there. So we’re definitely interested in the amount of research of it all, but there’s so much to read that we just know that we’re going to be constantly learning.

AX: Do you get into why Martin had his particular methodology as a serial killer that led him to be dubbed the Surgeon? I mean, obviously, being a doctor in his regular life seems like it might have contributed to that …

FEDAK: It’s a changing methodology. The Surgeon didn’t always kill people the same way. So we’ll realize there were phases, like any great artist. Not to say he’s a great artist, but like a painter, there were different phases, and different things that he did.

AX: How did you come to cast Tom Payne as Malcolm Bright?

FEDAK: Tom Payne’s a delight. Essentially, at the heart of any show, you need a person who can be the Number One on the call sheet, and be someone who is our eyes and ears into this show. And what’s great about Tom is that he can not only play smarts and emotion, but he also has this pain. There’s something about him where you look at him, and you just feel this angst and pain that he’s been through. And that makes it. We still feel for him. Even when he’s doing crazy things, we know his trauma.

AX: As far as casting Michael Sheen and Bellamy Young, what had you seen them do before that made you go, “Gee, we’d like to work with these people”?

FEDAK: Absolutely nothing. No, I’m kidding. When it came to Bellamy, she’s incredible. She’s fantastic. And actually, I had seen the film that she had done with Lou Diamond Phillips [2016’s THE NIGHT STALKER]. But also, her work on SCANDAL is incredible. To take a character that could be so easy to just forget about, and breathe such life into it, this is a person that we wanted for our show, because Jessica needed somebody who was a powerful and commanding figure in her own right. So we needed Bellamy Young. And that’s what she brings to it. She brings that energy, she brings charm, she brings fun, and a level of sexiness that’s awesome as well. And when it comes to Michael, I’ve been a fan of Michael for years, from his work with [writer] Peter Morgan – we saw him on stage in FROST/NIXON, and he’s amazing. He’s incredible, and he just understands the material in an innate way.

AX: Lou Diamond Phillips plays Malcolm’s boss, Gil Arroyo. How did you come to choose that surname for him? Was it to suggest there’s something canyon-like about him?

SKLAVER: We had no thought of that at all. Lou is of Filipino descent, and he hasn’t played many Filipino characters before. So we wanted a Filipino name, and the Spaniards were very involved in the Philippines. So it’s a traditional Filipino name, which is what Lou’s ancestry is, and that’s what Lou liked. Because once you cast a role, you do want it to fit the character.

AX: When you’re coming up with the weekly crimes that Malcolm and company are investigating, do you start with, “What if somebody thought this, and then what would they do to act it out as a crime,” or do you come up with, “Here’s a crime scene, this is what it looks like, what would you have to be thinking to create this?”

FEDAK: I think we come at it from both angles. Sometimes, we’ll come at it strictly from character and go, “What would this person do if you had this psychosis, if you had this disorder?” And then sometimes, we’re just like, “Well, this would be cool.” And then we build a case backwards from that. So I think each time, we’re looking at, what is the psychology, and also, what is the crazy thing we want to say? 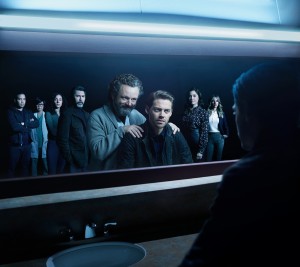 AX: What are the specialties of the different people on this homicide squad?

FEDAK: Well, obviously, when it comes to Edrisa [played by Keiko Agena], we know that she’s the medical examiner, she’s the math and science. That’s her gift. When it comes to Gil Gil’s been essentially New York’s top cop when it comes to murder for quite some time. So his cases – it’s only the weirdest cases. All the strangest stuff goes to Gil. And when it comes to Dani [played by Aurora Perrineau] and JT [played by Frank Harmel], they’re both his handpicked people. So he builds a family. Essentially, they’re really smart detectives from different parts, they both have different backgrounds, and also the fun part for us is to explore those characters. None of the characters in this show are ignored, it’s not like we forget about them. No. We’re going to learn about JT, we’re going to learn about Dani, and that’s the fun of the show. Because Bright is curious. If you show him something, he’s going to try to figure it out. So that’s the thing for them. The more he learns, he wants to learn about them as well.

AX: It seems like, except for Gil himself, his squad is made up of younger people. Lou Diamond Phillips had suggested it was because Gil wanted them to have stamina, and also because he doesn’t want to have people who working for him who are his age and are pissed off that he’s lieutenant and they aren’t …

FEDAK: I think when it comes to Gil, he puts together a crew, and he wants people who are young and hungry. He wants that team. We’ll see that he works with other cops his age, but when it comes to his team, early on, from a storytelling perspective, we didn’t want to do a show where it was going to be a two-hander, and it would just be two people working together. I really like the idea of a team. And that allows us to have episodes which are more about Gil and Bright. And there will be other episodes that are about Dani and Bright. And that gives us an ability to jump around and put the show in a bigger world.

AX: And what do your parents think of PRODIGAL SON?

AX: So they weren’t concerned about the genesis of the story?

AX: But they weren’t concerned that the idea started with you and Sam Sklaver asking what if one of your parents was a good parent but a serial killer? Or do they know?

FEDAK: They know. I think they get it. I’ve been working on TV shows and stuff like that. They enjoy it and my father will give me a couple calls and pitch me some ideas. That’s our relationship.

FEDAK: Right now, it’s all PRODIGAL SON, all the time. We’re knee-deep in it.

This interview was conducted during Fox Networks’ portion of the Summer 2019 Television Critics Association press tour.