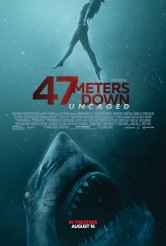 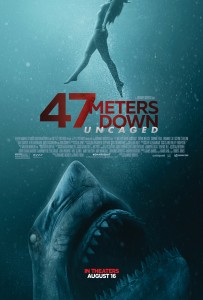 In 47 METERS DOWN: UNCAGED, Mia (Sophie Nelisse) is having a rough time at the private international high school she attends. It doesn’t help that her new stepsister Sasha (Corinne Foxx) would just as soon ditch as defend her. However, Mia’s dad/Sasha’s stepdad Grant (John Corbett) has an intriguing job, mapping the underwater ruins of a coastal Mayan city. Cool schoolmates Nicole (Sistine Rose Stallone) and Alexa (Brianne Tju) know about the ruins, and think it would be fun to go on a diving expedition there. Sasha is game; Mia lets herself be convinced. Naturally (for this genre), they don’t tell anyone of their excursion. Problem One: the ruins aren’t exactly stable. Problem Two: the ruins are inhabited by blind but extremely large and hungry Great White sharks. For awhile, Problem Three might seem to be how to justify the “47 meters down” part of the title, but 47 METERS DOWN: UNCAGED gets there eventually.

For those who want to compare 47 METERS DOWN: UNCAGED with 47 METERS DOWN, there are some tradeoffs. On the plus side, the dialogue and characterizations in 47 METERS DOWN: UNCAGED are a notable improvement. This doesn’t mean the script is snappy and quotable, but nobody says anything particularly clunky or repeats themselves endlessly or does anything that seems unreasonable in the circumstances. Additionally, those characters who survive long enough turn out to be commendably resourceful. We root for them instead of just wondering what will happen. The acting is efficient across the board, and everyone is to be commended for their stamina during largely underwater performances.

The submerged sets are also impressive, eerie and intriguing. However, they interfere with what worked best about the original 47 METERS DOWN. The earlier film got primal terror out of the abyss, the darkness in every direction, vertical as well as horizontal, where anything could be lurking just beyond the limited beam of a flashlight. Here, we have floors, roofs and pillars. There are still dark spaces, but we know where to look. It makes things a little less scary.

Also making things a little less scary are the blind sharks, which, because of both their size and their eyes, look a little more CGI than their sighted ocean-swimming kin. There are also some plausibility issues here. Anybody who’s ever had a home aquarium knows that fish generally grow to whatever size the tank will accommodate. The sharks in the ruins are way too big for the space. Also, real Great Whites eat a seal maybe every two days. In the first film, we didn’t have to wonder about what was going on with the sharks, because there were a bunch of them – it wasn’t the same shark continually attacking. Here, the sharks are overeating like crazy.

Granted, 47 METERS DOWN: UNCAGED is hardly claiming to be a nature documentary. Indeed, it features a closing credits note that no real sharks were harmed in the making of the film, and that humans are a lot more dangerous to sharks than the other way around. In this case, it seems like another way of saying “the people and animals you have seen are entirely fictitious.” Knowing this, if you enjoy big shark movies, 47 METERS DOWN: UNCAGED qualifies as decent if unexceptional summer fun.