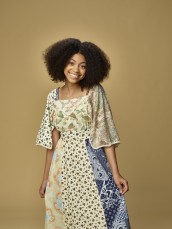 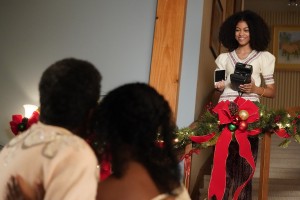 MIXED-ISH, now in its first season Tuesday nights on ABC, is spun off from BLACK-ISH. In BLACK-ISH, Tracee Ellis Ross plays doctor, wife and family woman Rainbow Johnson. MIXED-ISH, which Ross created with Kenya Barris (who also created BLACK-ISH) & Peter Saji, chronicles Rainbow’s childhood. Arica Himmel plays the young Rainbow in MIXED-ISH (Ross narrates the show as Rainbow’s adult self). As MIXED-ISH begins, we’re in the ‘80s. Rainbow, her two younger siblings and their parents, black mom Alicia (Tika Sumpter) and white dad Paul (Mark-Paul Gosselaar) move from a free-spirited commune to suburbia, where the kids must deal with their peers at public school.

Fourteen-year-old Himmel made her acting debut off-Broadway. She was previously in the series THANKSGIVING and the feature film BEFORE YOU KNOW IT.

ASSIGNMENT X: Were you a fan of BLACK-ISH before you got involved in MIXED-ISH?

ARICA HIMMEL: Yes. I loved watching BLACK-ISH with my family all the time.

AX: You’re playing the younger version of Tracee Ellis Ross’s BLACK-ISH character Bow, which means we have to see some of that in your performance. Have you ever had a part before that required you to study somebody else’s performance, so you could somewhat be like them?

HIMMEL: No, actually. This is my first role where I was incorporating elements from Tracee’s acting, and also some of my own stuff that I want to put into the character. Everything else was just a new character, not taking after anyone else.

AX: Has Tracee Ellis Ross given you any advice about playing Bow?

HIMMEL: Really, I think the most helpful advice I’ve gotten from her was to stay true to the character, but also have fun with it, and just have fun in general. This is a big opportunity, and it’s exciting.

AX: Do you have any input into your character? Do you talk to the show runners and say, “You know, it might be fun if I did …”?

HIMMEL: Yeah. During the shooting, I love to improvise a little, or add my own little thing. I listen to the directors, and it’s really fun. 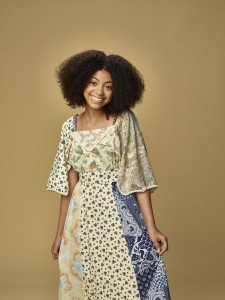 AX: And is Bow’s journey at all similar or different to your own journey? You didn’t move from a commune to the suburbs, but just in terms of being in a new school …?

HIMMEL: Going to the first day of school is obviously a big challenge, and being that new kid is also a challenge, and I can relate to that. And just like Rainbow – she’s not only the new kid, but she’s also mixed at a time when people weren’t used to that, so that’s how I’m similar to Rainbow in that way.

AX: How is it playing an older sister to two younger siblings?

HIMMEL: I have an older sister, so now I have the feeling of what it’s like to be the bigger sister. And they’re really sweet, and I love working with them.

AX: Do you have more sympathy for your older sister now?

AX: How is working with Mark-Paul Gosselaar and Tika Sumpter?

HIMMEL: They’re really nice, and I love acting with them, and there’s something about the whole family that has this special bond that I really love to be a part of.

AX: Had you done half-hour comedy before MIXED-ISH?

AX: Have you asked anybody about the half-hour comedy acting experience, or are you just figuring it out and experiencing it for yourself?

HIMMEL: Yeah. I think I’m just going to find out what’s down the road for me. And it’s going to be exciting.

AX: And what would you most like people to know right now about MIXED-ISH?

HIMMEL: If you’ve ever had a problem with identity, no matter what you look like or who you are, this is the show for you.