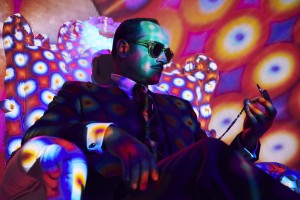 In LEGION, now in its third and final season on FX Monday nights, Navid Negahban plays Amahl Farouk. Farouk isn’t anybody’s garden-variety antagonist. He was once a Middle Eastern ruler with enormous psychic powers, but was defeated by X-Men founder Charles Xavier (Harry Lloyd). Farouk took revenge by inserting himself into the mind of Xavier’s then-infant son, who grows up to be super-powerful mutant David Haller (Dan Stevens).

In Season 1 and part of Season 2, Farouk took on the form of David’s psych hospital buddy Lenny (Aubrey Plaza), and then possessed scientist Oliver Bird (Jemaine Clement). Farouk additionally appeared as a malevolent blobby green being and a few other individuals and entities, before we finally met the “real” version of him as portrayed by Negahban in Season 2.

Negahban is having a busy year. Besides playing Farouk in LEGION, the Iran-born actor has also been on the big screen as the Sultan in Disney’s live-action ALADDIN and appeared in an arc on GOD FRIENDED ME. Negahban spent two years on HOMELAND as Carrie Mathison’s nemesis Abu Nazir. Other more recent credits include 12 STRONG, AMERICAN SNIPER, THE MESSENGERS, MISTRESSES and THE TEAM.

ASSIGNMENT X: When you were cast as Farouk, did you look at what Aubrey Plaza had been doing and what Jemaine Clement had been doing, or did you figure that your incarnation of him would be very different?

AX: Did you watch their scenes as Farouk repeatedly?

NEGAHBAN: I watched Season 1 and Aubrey did a fantastic job, and it was fascinating just watching her. She brought her feminine flair to it, and then I had to check that out and translate it into what I [as Farouk] have done to her, what have I forced her to do to behave the way that she’s behaving, and that kind of started the journey of Amahl Farouk.

AX: Having spent so many years inside David and causing David to think he was schizophrenic, what does Farouk think of David? Does he just think David is a total wuss for not immediately trying to take over the world, or is he annoyed that David isn’t living up to his potential, or …?

NEGAHBAN: Generally, I feel he feels like a father to a son. He wants to see his son become what he should be, and he might be a little bit frustrated with him. 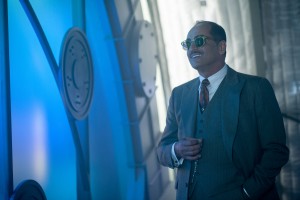 AX: So in Farouk’s view, he’s trying to get David to live up to his full potential?

NEGAHBAN: That will remain to be seen [laughs].

AX: Not asking for Season 3 spoilers, but in Season 2, did you have a favorite scene, or a favorite episode?

AX: Where did you shoot the desert sequence?

NEGAHBAN: Season 2 was shot in Los Angeles. We were kind of outside in the woods, in the middle of nowhere. And then I also liked my interaction with Aubrey [when she is playing non-Farouk Lenny].

AX: The scene at the swimming pool?

NEGAHBAN: No. The swimming pool was very playful and interesting, but my interaction with her when we were standing at the fortune teller booth, when she’s coming and she’s nagging me, that interaction was very interesting, especially because she also learned some Farsi words, and she was using her Farsi there.

AX: Has Farouk always had his powers, or did he discover them in maturity? That is, was he a ruler before he became super-powered, or the other way around? Or do we know?

AX: Did you watch LEGION Season 1 recreationally before you became involved with the show?

NEGAHBAN: I didn’t have a chance, because I talked to Noah [Hawley, who created LEGION for television, based on the Marvel comics] on Thursday or Friday, and then I was on the plane on Sunday, I arrived here on Monday, and I was handed the scripts. And then while I got here, I binge-watched as much as I could to have an understanding for the character and the show. 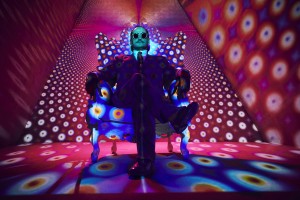 AX: Are there any other onscreen characters or real-life people that you feel Farouk is similar to, any politicians or rulers or superheroes that you might look at, and go, “Maybe a little like this guy”?

NEGAHBAN: [laughs] No, not really. I never based him on anybody. I never thought of that. It’s something I have to think about.

NEGAHBAN: I do. I have a play that I’m producing called ASHER’S COMMAND, and that just got accepted to the New Works Series in New York. We’re going to have a reading of it in New York, and then we’re planning do it here [in Los Angeles], find a home for it.

AX: And what would you most like people to know about LEGION Season 3?

NEGAHBAN: That you’re in for surprises.

This interview was conducted during FX Networks’ portion of the Television Critics Association (TCA) press tour.

Related: LEGION: Rachel Keller on the third and final Season of the FX mutant series