The showrunner and executive producer talks about the Netflix series 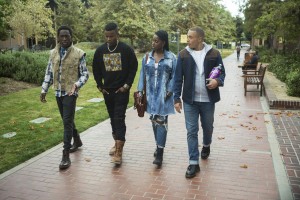 Netflix’s DEAR WHITE PEOPLE is currently streaming its first three seasons on Netflix, with a fourth and final season set for 2020. Created by Justin Simien, who also wrote and directed the 2014 feature film of the same name, DEAR WHITE PEOPLE is set at the fictional Winchester University, where students grapple with issues that affect them personally, including racism, sexism, classism, and homophobia, between one another and in broadcasts from the college radio show, which is also called “Dear White People.” In the current season, DEAR WHITE PEOPLE takes on possible sexual predation, and possible false accusation.

Yvette Lee Bowser, one of DEAR WHITE PEOPLE’s executive producers, has been the series show runner on all three seasons thus far. Bowser’s other credits include being a writer and producer on the series A DIFFERENT WORLD, HANGIN’ WITH MR. COOPER, LUSH LIFE, LIVING SINGLE, FOR YOUR LOVE, HALF & HALF, LIPSTICK JUNGLE, THE EXES, HAPPILY DIVORCED and BLACK-ISH. Additionally, Starz has just picked up the pilot for RUN THE WORLD, a pilot about four black friends that Bowser is producing.

On the set of the common area in one of DEAR WHITE PEOPLE’s sorority houses, Bowser talks about her work on the series.

ASSIGNMENT X: How many writers do you have in the writers’ room?

YVETTE LEE BOWSER: We have seven writers, including the two of us [referring to DEAR WHITE PEOPLE creator Simien].

AX: Justin Simien continues to write and direct for the show. What is your work with him like?

BOWSER: I just trust his gut, and apply my guidance.

AX: So does everybody in the writers’ room contribute to each episode?

BOWSER: Absolutely. We really encourage our writers to bring their personal experiences to the table when we sit down at the beginning of each season, and just pour their hearts out. And then we decide what shape the season’s going to take, based on what the room is telling us and feeling. Justin has an overarching vision each season, and then we fuel that with our own personal experiences, and we feed off of each other. It’s a really great group of writers, a really talented, really smart group.

AX: Do the actors also come in with their thoughts about their characters?

BOWSER: We usually have conversations with them, but we’re pretty in synch with what they would like to do, and they’re on board for what we want to do each season, absolutely. We definitely had a post-mortem after the first and second seasons, just to see how they were feeling, and that informed what we brought to the table in the next season. 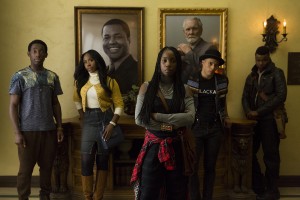 AX: Is that intentional?

BOWSER: It is. It absolutely is intentional that the radio station looks timeless, because the issues that we discuss and depict there are timeless. It looks like the radio station KCSU at Stanford, back in the ‘80s, when I was in college, and it also reflects the USC radio station present day.

BOWSER: We try to filter as little as possible, and that’s how we get to the truth and the best ideas, honestly. We try to make as much of what’s brought to the table fit within the overarching narrative of the season. It’s ambitious to do it that way, it really is. We bring some really explosive issues to the table, and then we discuss them, very thoroughly and very passionately, and the best ideas rise to the top. We all have such deep thoughts and personal experiences that we bring to this, and we’re all very transparent. We bring some raw emotion to the table, and provide a really safe space in the writers’ room, so people are constantly telling their truths, and some truths make it into the show, and some things are maybe not ready for the show. We’re really pressing the boundaries. Our motto here is, “Expect the unexpected.” So there’s really no place that the show can’t go and doesn’t go. We really go there.

This interview was conducted during Netflix’s set visit for the Television Critics Association (TCA) press tour.