The co-creator/EP talks about his latest sitcom 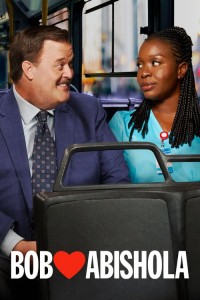 ASSIGNMENT X: What is the romantic dynamic like on BOB HEARTS ABISHOLA, compared to MIKE & MOLLY?

CHUCK LORRE: In MIKE & MOLLY, they were both searching for a relationship. In this, [Abishola] is not. She’s searching for security and a secure life for her and her son. The last thing – it’s not even on her list of priorities is a relationship. So she’s coming at this story from an entirely different perspective.

AX: How and where did you find Gina Yashere, who is one of your co-creators and is also a series regular in BOB HEARTS ABISHOLA?

LORRE: Al and Eddie found her standup on YouTube, and we saw Gina’s standup on YouTube, and you should check it out. It’s amazing, she’s a brilliant standup. And they showed me the standup on a laptop, and I said, “Well, if we’re going to do this, that’s how we’re going to do this.” And she flew here, and spent a couple of days talking with us. And the original idea was that she’d be a consultant, and then I said, “You know what? Don’t consult, just do it with us. Just be part of this.” And then, as we created the show of Kemi, Abishola’s best friend, it was a no-brainer for Gina to play that role.

AX: Gina Yashere is from England. Were there any issues with her translating her British experiences into American experiences?

LORRE: They’re very similar in a family being lifted up and put into a strange place, whether it be Detroit or London. I think there are a lot of similarities. 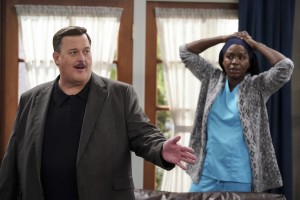 AX: Can you talk about your IMAG hats?

LORRE: It stands for Immigrants Make America Great. It’s an homage to what we’ve all been through, what our ancestors have been through, which is coming here and somehow finding a foothold, and making a life for ourselves, and for our children, and our descendants. Maybe if you dig deep, every show is a political show, but this is just a show that I think takes the time to recognize the greatness in that endeavor, the courage – oh, my God. Come on, let’s you and me pick up and move to Lagos and try and start a new life. That takes some serious courage. We’re not making a comment about legal [versus] illegal immigrants. We’re making a comment on the people that are here that are working their hearts out to make a life for them and their family. That’s the extent of what we’re trying to do in twenty-one minutes, I think, is how long we get [laughs].

For many, many years, I’ve been lucky enough to see people come to this country and build a life. I’ve seen people coming from different places, and I’ve always been struck by the courage and the relentless discipline and hard work that was involved in coming here, not even speaking English, and becoming fluent in English, and becoming fluent in success. That’s a story that I thought, “Let’s tell that story, and tell it through this odd romance.” But it certainly felt like a worthwhile endeavor.

AX: Do you feel like BOB HEARTS ABISHOLA has a political text or subtext?

LORRE: I don’t think there are any political statements in the show, do you? I don’t think so. It’s just about people. If there’s a subtext, the subtext is how wonderful are people who come here and bring their hard work and discipline and focus. Immigrants make America great. It’s so obvious.

AX: Your comedy series THE BIG BANG THEORY ended its twelve-year run in May. Has anybody told you about how it came up at a PBS Q&A session a few days ago?

LORRE: No, what happened?

AX: There was a panel for the PBS NATURE documentary “Octopus: Making Contact.” Dr. David Scheel, who is a professor of marine biology, and his daughter Laurel kept an octopus in a huge tank in their home. The octopus would watch TV with Laurel. They were asked, “What was the octopus’s favorite show?”, and they said, “THE BIG BANG THEORY.” The octopus would actually come to the front of the tank and get excited, apparently by the bright colors.

LORRE: Get out of here! Really? 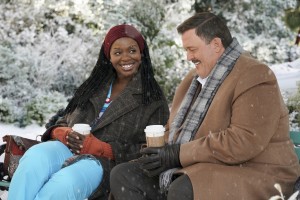 AX: Really. It’s in the transcript. I was wondering if you had a reaction to this new audience demographic?

LORRE: I’m going to have to stop eating calamari, I guess. I don’t want to eat the audience [laughs]. That’s fantastic. Thank you.