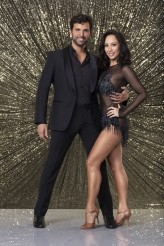 DWTS: 27 - Memorable Year night did not disappoint with tears, jeers and a sad fact that Nancy McKeon & Val Chmerokovskiy ended their run for the season 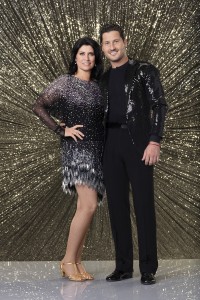 My favorite week of DANCING WITH THE STARS is always “My Most Memorable Year” night. No question the tears will flow but also the emotions will be emitting joy, seeing these people overcome their struggles and accomplish greatness, even if it’s just on the dance floor, in life. And at the top of that list of greatness this season is Juan Pablo Di Pace & Cheryl Burke who earned, besides the first and only ten, a trifecta of 10s dancing a Samba. Achieving a high tonight yet ending her time on the show, Nancy McKeon & Val Chmerkovskiy were the third to be eliminated. Also earning high marks tonight were Evanna Lynch & Keo Motsepe, Milo Manheim & Witney Carson, and Tinashe & Brandon Armstrong, who each earned 27 points. DeMarcus Ware & Lindsey Arnold and Alexis Ren & Alan Bersten came in third with 26. At the bottom is Joe Amabile & Jenna Johnson who received just 18 points for the night. They must have a great fan club keeping them in the race! Stay tuned.

Tinashe (singer-songwriter) and Brandon Armstrong
Natural. Inaba thought there was so much more to her dancing. Goodman called her Rumba edgy. Tonioli said it was sensuous.
Scores: Inaba – 9, Tonioli – 9, Goodman – 9, Harland – 9

Juan Pablo Di Pace (actor) and Cheryl Burke
So sexy! Inaba called him golden. Goodman just stood up and gave him a standing ovation. Tonioli said it was one of the best Sambas he has ever seen.
Scores: Inaba – 10, Tonioli – 10, Goodman – 10, Harland – 10

Joe “Grocery Store Joe” Amabile (reality star) and Jenna Johnson
His best. Inaba saw he was trying. Goodman said he was a work in progress. Tonioli said he needed to work on quality in his Viennese Waltz.
Scores: Inaba – 6, Tonioli – 6, Goodman – 6, Harland – 6

Who Went Home: Nancy MeKeon & Val Chmerkovskiy
Who Has Legs to Take Home the Mirror Ball: Tinashe has the most natural ability but Juan Pablo has sex appeal and Alexis is burning up the stage. Don’t count out Milo!