Home » ONCE UPON A TIME Exclusive Interview Lana Parrilla Season 7

ONCE UPON A TIME: Lana Parrilla chats about the Seventh and Final Season – Exclusive Interview

The actor talks about playing Regina and the Queen 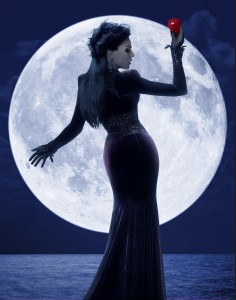 ABC’s ONCE UPON A TIME is now in its seventh and final season on Friday nights. As ONCE UPON A TIME fans know, most of the characters from the first six seasons are still ensconced in Storybrooke, Maine, living out their happily-ever-afters. However, as we learned at the start of Season 7, a few of our heroes went questing and wound up under a new curse in Seattle, where once again, they had to be reawakened their fairytale roots.

Among these is Lana Parrilla’s Regina Mills, formerly the Evil Queen, who cast the curse that got the story going way back in Episode 1. Regina spent a good portion of Season 7 thinking she was bar owner Ronnie before she became “awake” and remembered her real identity as the adoptive mother of now-grown Henry (Andrew J. West), the Author who can stories into being.

Parrilla, a native New Yorker, has had arced and regular roles on series including SPIN CITY, BOOMTOWN, 24, WINDFALL, LOST, SWINGTOWN and MIAMI MEDICAL, but she is best known for her magical spin on Regina.

ASSIGNMENT X: Did the ONCE UPON A TIME producers have to do any persuading to get you to come back to the new storyline for Season 7, or did you just say, “I want to come back”?

LANA PARRILLA: [laughs] There were some conversations about what it was like, and what their plan was for Season 7, and I wanted to make sure, if we were going to come back, that Regina was going to have a different kind of story. She wasn’t going to be in that constant turmoil and losing love all the time. I wanted something different for her, and they wanted something different for her as well. So they pitched the whole season to me, or at least the concept, and I loved it. 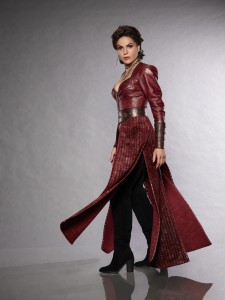 AX: Regina owns a bar this season, so is she going to jump up and do any karaoke, or are we going to see any more singing, like the musical episode where you rocked out in Season 6?

PARRILLA: [laughs] Funny you said that, I actually said that. [Series creators/show runners] Eddie [Kitsis] and Adam [Horowitz] said, “We see you as a front-woman, like in a band.” And I just thought, “Are they going to have karaoke nights at the bar?” Who knows? Maybe. I might be singing again.

AX: Do you think that Regina and Rumplestiltskin, played by Robert Carlyle, need therapy over the fact that they both killed both of their parents?

AX: Do you have a preference for Regina when she’s in this world’s garb, or do you like the fantastical Evil Queen costumes? 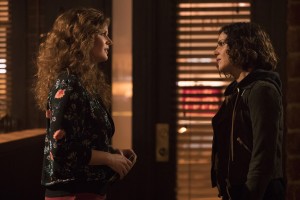 PARRILLA: I love that I’m on a show where I get to wear many different outfits, and I love the Queen outfits, and if there is a day when I don’t get to wear them, I’m sure I’ll miss it. Now that I’m in jeans and short boots, I like that, too. It’s a little more comfortable. I feel like my back isn’t as sore as it has been over the last six years [laughs], and I can breathe better in that costume, for sure. But I love the Evil Queen and I don’t think she’s really going anywhere, and so to be able to wear those costumes again, I would love that.

AX: When you started ONCE UPON A TIME way back when, did you know that the Queen was going to turn out to have this redeemable side, or did you just think, “I’m playing this to the hilt,” and then the producers decided, “But Regina does love her son, and that implies she’s got some good in her”?

PARRILLA: I always knew that we would learn about how she became evil. I just didn’t know what the story was going to be. But I can’t imagine a character not growing on a television show. 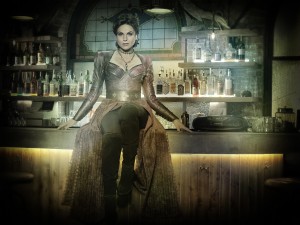 AX: What would you most like people to know about Season 7 of ONCE UPON A TIME?

PARRILLA: To stay open. We’re on a new adventure, and just come along for the ride with us.