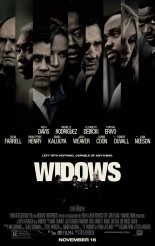 A good thriller that could have been great

WIDOWS started as a 1983 British miniseries written by Lydia LaPlante (creator of PRIME SUSPECT). It got a 2002 American remake as an ABC TV miniseries. Now director Steve McQueen and his co-writer Gillian Flynn have brought WIDOWS to the big screen in a new adaptation. It starts out tense and gripping and fascinating, only to feel like it’s fudging things in the third act.

Viola Davis stars as Veronica Rawlings, a one-time teacher’s union rep in Chicago who is in a long-standing marriage to wealthy and loving Harry Rawlings (Liam Neeson). The trouble with Harry (to borrow a cliché) is that he’s a criminal mastermind. When Harry and his crew are killed fleeing a robbery, Veronica is devastated by the loss – and scared to death after a visit from Jamal Manning (Brian Tyree Henry). Jamal is running for a Ward Alderman seat against fourth-generation politician Jack Mulligan (Colin Farrell). Jamal was the victim of the robbery, correctly assumes Harry was the culprit, and tells Veronica she has a month to pay back what Harry took. Veronica cannot get her hands on that much cash legally, but something Harry left for her in case of emergency inspires her to plan a robbery herself. Of course, Veronica cannot do this alone, so she tells the other widows of Harry’s crew that they are all in danger if Jamal doesn’t get his money.

The other widows, played by Michelle Rodriguez, Elizabeth Debicki and Carrie Coon, seem to know even less than Veronica does about how their husbands did things. However, most of them are swayed not only by Veronica’s pitch about the threat posed by Jamal, but by the promise of a big payout even after Jamal is paid off.

All of this plays out with a visual rush and dramatic thrills. There are some breathtaking, inspired plot twists, and a really smart, slow payoff to what seems at first to be just an effort to show Veronica’s human side – after Jamal shows up, she brings her little dog with her everywhere for the animal’s safety – but this also allows for a clever plot development. 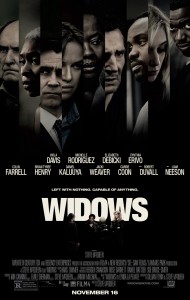 There are, however, a couple of things that may give us pause. Davis is a powerful actress and her grief and terror are palpable. But Veronica is written as someone with a few too many contradictions. Yes, she has a more comfortable life than the other women, but she is still meant to have been a teacher’s union official, a position generally attained by someone with at least minimal people skills. Granted, Veronica is frightened, and it’s fine if she’s not especially warm, but there’s a difference between being personally reserved and actively insulting people you’re trying to recruit to a perilous cause. Veronica, not to put too fine a point on it, is fairly awful to her aspiring partners in crime, so much so that it’s a little surprising they agree to work with her. It feels like a major tactical error on Veronica’s part, and a logic mistake on the part of the filmmakers.

There are also a pair of flashbacks that contradict one another for no reason (it doesn’t affect the plot) and a bit of diffusion at the finale that leaves us wondering exactly what happened with a certain aspect of the story. It all works, but it doesn’t fit together as well as it seemed to at the start. It’s unclear if this is the filmmakers’ intention, or if some scenes were cut for time.

McQueen certainly sets a dynamic stage, with bravura action and gorgeous environments, as well as making his actors look stunning. (Davis and Debicki get knockout wardrobes.) The cast is impeccable. Besides the aforementioned, the perfect Cynthia Erivo has a major role, and Robert Duvall, Jacki Weaver, Garret Dillahunt, Kevin J’ O’Connor and John Michael Hill all impress in smaller ones. Daniel Kaluuya, the nice-guy hero of GET OUT, is outstanding as a sadistic enforcer.

WIDOWS is a good thriller that seems like it could have been great. It will be interesting to find out why certain choices were made that led to a slightly lesser impact.