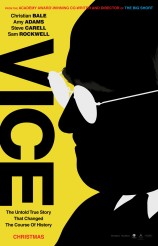 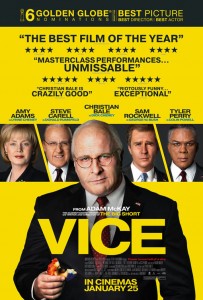 VICE is writer/director Adam McKay’s biodrama about former U.S. Vice-President Dick Cheney. Cheney is played here by Christian Bale, giving a terrific performance in some bravura makeup by Greg Cannom. There’s no arguing with Bale’s work as the quiet, shrewd, manipulative figure, who managed to stay very private even at his most public.

The film takes Cheney from a young man in 1963 (about the only point where Bale the actor is visually recognizable) to the end of the George W. Bush presidency, and a famous follow-up interview. Originally, Cheney got into Yale but was thrown out for drinking and fighting. His fiancée, Lynne (Amy Adams), gives him an ultimatum: sober up and make something of himself, or she’ll find someone else. Cheney goes on the wagon and becomes a White House Congressional intern, mentored by Donald Rumsfeld (Steve Carell). VICE follows Cheney political/professional career (the two are inextricably linked), as his lawyer and a young Antonin Scalia alert him to something called the Unitary Executive Power Theory. This theory postulates that the American President has absolute power, and that anything the President does is legal. Nixon essentially said this, after resigning, to a flabbergasted David Frost. Cheney likes this theory very much. He loses his political footing at one point, but is brought back in from the private sector when “Bush’s son,” as everyone keeps referring to George W. (Sam Rockwell), insists that he wants Cheney to be his running mate. Given that George W. doesn’t seem to be too wrapped up in details, Cheney sees an opportunity to do something with the vice-presidency, which he’s previously described to his wife as a dead-end job. Cheney gets in and, according to this film and the belief of many political analysts, largely runs the country for eight years.

VICE gives Cheney his human moments. In the film, he comes off as a good father, who at some points puts concern for his children (well-acted as adults by Alison Pill and Lily Rabe) ahead of ambition. However, he is mostly concerned with amassing money and power, often at the cost of human lives, which (at least in this movie), bothers him not at all. He cares about Lynne’s approval, he tries to do right by his daughters, and otherwise, he seems to have no loyalties to either other people or to the truth. VICE depicts a series of focus groups set up at Cheney’s behest to gauge what’s the best way of selling a variety of agendas to the American people. According to the film (with a wholly plausible argument), the administration’s insistence on tying the 9/11 attacks to the uninvolved Iraq in order to justify an invasion inadvertently led to the rise of ISIS. 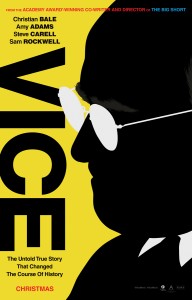 In examining many places where Cheney shaped policy, VICE gives a kind of “greatest hits” view of the man’s career. McKay tries some stylistic surprises (Jesse Plemons as our narrator, a scene in iambic pentameter, a mid-film fakeout), but most of it doesn’t rise to the degree of emotional engagement that his 2015 THE BIG SHORT did. The earlier film seemed to have more daunting subject matter (the causes of the mortgage crisis), but McKay was able to manage it and find humor in his outrage. Even though there was a lot going on in THE BIG SHORT, the story’s timeframe only encompassed a few years. The scope of what the filmmaker wants to cover in VICE is more than can be handled with any degree of depth in two hours and twelve minutes. A miniseries might have worked better, but there’s only so much time we can spend with this Cheney, because very little seems to impact him. He’s a tough subject for a character study, because he’s never shown that much character to studyin public, and understandably, there’s only so much the filmmakers want to depict via guesswork.

Lynne Cheney is a less guarded character, and Adams plays her with verve, but she’s a supporting player. Rockwell finds some charm in the younger Bush, who here just wants to show his dad he can hire people who’ll make him look good. Carell is fine as Rumsfeld and Alfred Molina has one fabulous surreal scene.

The situations Cheney creates are world-shaping and (for many) infuriating, but his responses to them are so muted that he’s not personally compelling as a central figure. VICE is a handy list of facts, with some imagined conversations thrown in, but even those who wholeheartedly agree with McKay’s point of view will likely find this overly dry. Viewers will be horrified, either by Cheney’s actions or by the film’s portrait of him, but either way, the overall effect is more like watching a dramatized Op-Ed than anything visceral. By all means do stick around for a mid-credits scene that is amusing and probably correct in anticipating viewer reactions.