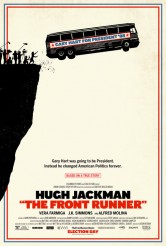 A chapter of political history, presented more intellectually than viscerally 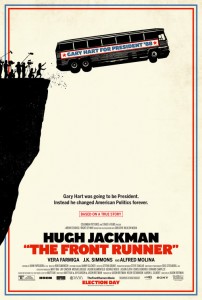 First of all, THE FRONT RUNNER is not the film adaptation of forever-in-development Patricia Nell Warren’s novel about an affair between an Olympic track coach and one of his athletes. Rather, it is a fact-based political drama about a three-week period when Gary Hart managed to go from the title position to the sidelines.

Return with us now to yesteryear – okay, thirty years ago – when a politician’s career could be tanked by an extramarital affair. Actually, one of the many questions posed by THE FRONT RUNNER is whether it was the affair itself or Hart’s way of handling the press that killed his campaign.

In 1988, it looked like Colorado U.S. Senator Gary Hart, played here by Hugh Jackman, was a cinch to get the Democratic Party nomination, and quite possibly win the presidency from Republican challenger, then Vice-President George H.W. Bush. Hart, as we see him here, is brilliant, well-spoken, well-read, focused firmly on the issues and apparently mending his long-standing marriage to his wife Lee (Vera Farmiga) after a separation.

Then, acting on something overheard, a couple of Miami Herald reporters stage an amateurish stakeout at Hart’s Washington, D.C. townhouse, in the hopes of getting compromising photos of the candidate and his possible mistress. Hart confronts the reporters, but they do get shots of Donna Rice (Sara Paxton) leaving the building.

What happens after that, and how both Hart and various news outlets handle it, fills the third act of the film.

There are so many issues raised in THE FRONT RUNNER that it’s hard to enumerate them all. Is it immoral to commit adultery? Whether it’s immoral or not, do people outside of the marriage and/or the relationship have a right to an opinion about it? Is it reasonable for a public figure to expect any kind of privacy? Does this kind of behavior have an impact on how a politician would do his or her job? What does a politician owe to his campaign workers? What does he owe to his family? What does he owe to not-savvy people who he brings into his life? Does the press have a duty to report this as news? These questions and more are treated seriously, but they crowd around each other so densely that none of them are explored with the time or depth they deserve.

Director Jason Reitman and his co-writers Matt Bai, who wrote the nonfiction book ALL THE TRUTH IS OUT, which is the basis for the film, and Jay Carson, seem committed to being noncommittal. That’s totally appropriate for a nonfiction tome, but arguably less so for a drama that plays with timeline and historical facts, as well as creating dialogue between Gary and Lee that is obviously not part of the public record. The strain of not taking a visible position takes a toll on THE FRONT RUNNER’s momentum. It’s hard to build suspense when not only do we know the outcome, but we don’t have an emotional investment in it.  The movie starts to resemble Hart himself, so reticent to make any kind of statement that it harms its own cause. We do come away with a sense that Hart could possibly have salvaged his candidacy by acknowledging what had happened, instead of avoiding the words at all costs.

This is in no way a reflection on Jackman’s performance. He invests Hart with wit and enthusiasm when he’s in his element, impressive fury when pressed with queries that he feels shouldn’t be raised, and almost numb shame when the situation starts to affect his family. Farmiga has dignity, strength and a becoming punitive streak as Lee. In fact, THE FRONT RUNNER is at its most intriguing when it explores the dynamic between the Harts, where Gary may stray, but Lee seems to hold the reins. However, once again, the filmmakers don’t want to say too much, and there are too many other things going on for this aspect to take focus.