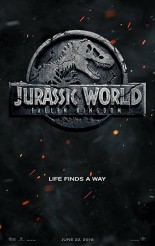 The park has fallen, but the quality has risen 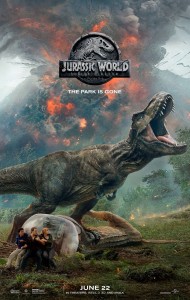 While it still has more than its fair share of “Say what?” logic and plot holes, JURASSIC WORLD: FALLEN KINGDOM represents what might be called an evolutionary step up from its immediate predecessor, 2015’s JURASSIC WORLD.

In JURASSIC WORLD: FALLEN KINGDOM, not only has the dinosaur park been closed for three years, but Isla Nublar, where it’s located, is on the verge of being destroyed by a volcano. Former park employee Claire Dearing (Bryce Dallas Howard, reprising her role from JURASSIC WORLD) is trying to rally support for saving the dinosaurs. Enter Benjamin Lockwood (James Cromwell), the ailing former business and science partner of original entrepreneur John Hammond (the late Richard Attenborough), who has plans to relocate as many of the animals as possible to a secluded sanctuary where they can live in peace and isolation, safe from the public (who will also be safe from them).

The velociraptor called Blue is of particular interest, as she responds to commands from Owen Grady (Chris Pratt, also back for a second JURASSIC go-round). Owen at first is reluctant to return to Island Nublar, especially with now-ex-girlfriend Claire, but in the end, his affection for Blue wins out.

Suffice to say that some people involved in the dinosaur relocation project have ulterior motives. Since it’s shown in the trailers, it’s not too spoilery to say that the story heavily features Lockwood’s mega-mansion, where the billionaire’s adored and adoring young granddaughter Maisie (Isabella Sermon) overhears some things not meant for her ears.

The dinosaurs look great as always, with especially good character work lavished on a new super-predator that has a wicked sense of humor, displayed in a scene done so well that it’s worth re-watching. On reflection, it seems like it might have improved the overall effect of JURASSIC WORLD: FALLEN KINGDOM to give the other dinosaurs a little more personality, especially the pivotal Blue. Director J.A. Bayona is still able to use the huge animals to make us mist up more than once, but seeing what he and the effects team can do when the script by Derek Connolly & Colin Trevorrow lets them show dinosaur character, there’s a sense of lost opportunity.

Bayona keeps the pace sprinting along and gets a lot of mileage out of odd juxtapositions, with fairytale dread in sequences with dinosaurs indoors.

The cast is high-end and does a bang-up job of interacting with the CGI. Justice Smith, as a techie would doesn’t want to be in the field, makes a strong impression and has a first-rate scream (an asset in this kind of film), and Rafe Spall impresses by elevating a not really well-written role.

There are plot holes here that a Mososaurus could swim through. The idea that a U.S. government panel would convene to discuss the possibility of saving giant animals that are not on American soil, especially given the current Administration’s hostility toward the Endangered Species Act (to say nothing of the fact that the animals are cloned and can be recloned), starts things off on a note of head-shaking unlikelihood. Since they refuse to come to the rescue (no surprise there), we start out with a sequence that is implausible, uncinematic and unnecessary all at once.

Then there’s Claire’s abrupt conversion. In the earlier JURASSIC WORLD, she started out seeing the dinosaurs as a commodity. Getting chased around the park by them wouldn’t seem to make her heart grow fonder, but at the beginning of JURASSIC WORLD: FALLEN KINGDOM, Claire is ready to risk life and limb to help the beasts. We’re pretty much on her side in this, but character-wise, it goes unexplained.

That’s not the half of it, and the movie has just gotten underway. JURASSIC WORLD: FALLEN KINGDOM essentially requires parking one’s brain in the lobby. Still, it’s livelier and more playful than its immediate predecessor, and has a lot of moments that are enjoyable. Generally speaking, if adventures with CGI dinosaurs sound appealing, this delivers.