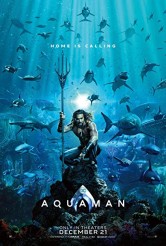 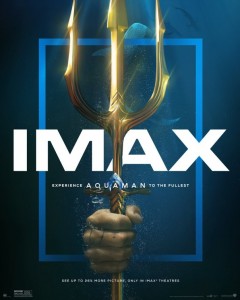 While it takes a little while to establish this, most of AQUAMAN (save its plentiful flashbacks) takes place after last year’s JUSTICE LEAGUE. Good news for those who remember Arthur Curry, aka Aquaman, from that film: he’s stopped sulking and is mostly having a good time using his superpowers to rescue people from pirates and so on. However, he still really doesn’t want to go back to Atlantis. As we are shown, Arthur’s father Tom Curry (Temuera Morrison) is a lighthouse keeper who, about thirty years ago, saw a woman washed up on the rocks below. Thinking she was drowning, Tom saved her. She turned out to be Queen Atlanna (Nicole Kidman) of the undersea kingdom Atlantis, fleeing an arranged marriage. Tom and Atlanna fall in love, have a son, and live happily until the Atlantians come to spoil things. To save her family, Atlanna returns to the sea.

Arthur found out that Atlanna was forced to marry the king after all, had a son with him – and then was executed for betraying the king with a surface dweller. Arthur therefore wants nothing to do with Atlantis, even when Princess Mera (Amber Heard) of a neighboring underwater kingdom, insists that he’s needed. It seems Arthur’s half-brother Orn (Patrick Wilson) is determined to unite the seven underwater kingdoms so they can all declare war against humans. Somebody has to challenge Orn’s right to rule Atlantis before he gets his war up and running and destroys the planet. One tidal wave later, Arthur agrees to fight Orn, though he’s still sure he’s not going to rule Atlantis as its one true king. Yeah, we can guess how that will turn out. 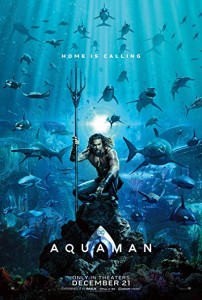 There’s a lot of questing and fighting and some mythical back story. Under James Wan’s direction, it’s all gorgeous and distinctive and a little ‘60s-looking trippy. Since there really are wildly-colored, iridescent sea creatures, it makes sense that the underwater world is reasonably bright and lively; finally, a filmmaker utilizes bioluminescent jellyfish to add natural light to sequences. It’s also delightful to see how different the denizens of each kingdom are from one another; kudos to the design team.

Most of AQUAMAN zips right along. It helps greatly that Momoa, shrewdly cast, makes Arthur look like someone who can throw multiple opponents all over the place even without Aquaman’s superpowers. He makes you believe a man can swim. What helps even more is that Arthur/Aquaman enjoys what he does. He may not want to run a kingdom, but he’s fine with physical challenges and throwing back beers with his dad.

There are a few things that AQUAMAN doesn’t do so well. Occasionally, the action gets so wild that we can’t tell the outcome of certain clashes. One character gets particularly creaky dialogue that would be a challenge for any performer.

While the writing for Athur/Aquaman is generally snappy, a few other actors are called upon to rise above some less than inspired lines. Wilson surmounts a few dodgy speeches as the ambitious Orn. Heard is good as the staunch Mera, and Morrison is touching as Arthur’s loving father. Yahya Abdul-Mateen II plays the antagonistic Black Manta with a zest that suggests he’s ready to star in his own spinoff, which may be the intention, and Randall Park is amusing as an exasperated scientist.

AQUAMAN does nothing to subvert or expand its genre, but as superhero movies go, this is one of those that’s worth watching for the sheer pleasure of it.