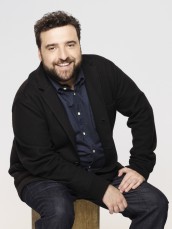 The actor plays a Rabbi on his new series 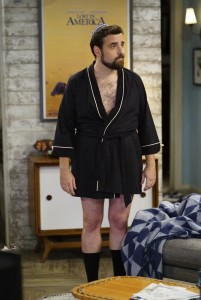 In CBS’s Monday night comedy LIVING BIBLICALLY, based on the nonfiction book by A.J. Jacobs, Chip Curry (Jay R. Ferguson) determines that he’s going to spend a year trying to live as closely as possible to the dictates of the Bible – even though nobody around him is doing the same.

Last year, Krumholtz also appeared in filmmaker Woody Allen’s latest feature WONDER WHEEL. There remains a great deal of controversy around Allen, who has been accused by his stepdaughter Dylan Farrow of sexually abusing her when she was a child, and who continues to make films about romances between much older men and young women.

On January 5, 2018, Krumholtz Tweeted, “I deeply regret working with Woody Allen on WONDER WHEEL. It’s one of my most heartbreaking mistakes. We can no longer let these men represent us in entertainment, politics, or any other realm. They are beneath real men.”

In this interview, Krumholtz discusses LIVING BIBLICALLY and Tweeting politically.

DAVID KRUMHOLTZ: Most of what is unhinged about him comes out of context. He is a spirited character who sees the world in a very specific way, and he might be slightly self-obsessed, and he’s deeply neurotic, but he’s also – well, let’s put it this way. There’s one episode in which my character claims to be one of the great poker players, and then is first to lose in a poker game. In the same episode, he ends up at a bar where he hits on a woman that he knows is a lesbian. So he’s that kind of slightly clueless, detached guy, and yet he’s able to provide sage advice – very grounded sage advice. Whereas the priest character is more sort of put-upon by the world, my character comes with the more sort of Old World-type thing of, “Yes, this too shall pass, these things happen, we’ve all been there, think about it this way.” So he’s a very logical man, and at the same time, the man himself is a strange person.

AX: Have you played a rabbi before?

AX: Did you talk to anybody you knew to prepare for the role, or is Rabbi Gil such an individual that it didn’t require research?

KRUMHOLTZ: I didn’t speak to anyone for this one. It’s a comedy, it’s self-explanatory, and I thought I’d create it from scratch.

AX: Can you elaborate on your Tweet regarding Woody Allen and working on WONDER WHEEL?

KRUMHOLTZ: I stand by that statement a thousand percent. I received all the vindication and validation I need from Dylan Farrow herself to thank me for the Tweet, and it was very kind of her to do that. I’m very moved by the #TimesUp movement as someone who has witnessed sexual harassment on set in the past. I’m not going to name names, I don’t out victims, I’m not going to out the perpetrators, it’s not my place, at least not right now. But being moved by that movement, and being a father of a daughter, and feeling like, whether you believe Woody or you believe Dylan, it’s time at very least for Mr. Allen to stop making inappropriate films about February to December romances. Because people don’t like it. Women are offended by it. And those voices need to be heard. And so as a former fan of his, I think it’s time for him to start making films that don’t further indict him. I feel ashamed and deeply regretful that I knew what I felt I knew going into it, and yet I still made the decision to work with him. It’s a sad truth, it’s my truth – I did it, I worked with him, and I’m trying to rectify the situation by no longer associating with any man that I know that would commit these kinds of egregious acts. Yesterday on Twitter, I Tweeted that, and I awoke some ire from some hardcore feminist groups, who understandably said, “Hey, it’s a little too late to be commenting.” I understand that, and at the same time, I feel that that’s an audacious response to a genuinely heartfelt apology on my behalf.

AX: You said you are “a former fan,” so obviously this has impacted your feelings about Woody Allen’s work …

KRUMHOLTZ: Some of us grow up idolizing people, and certainly, for a New York Jewish kid from Queens, Woody Allen was a perfect idol. Looking back, there are so many themes in his films that are inappropriate, and yet, there’s no doubt that at one point, he was a brilliant filmmaker. That doesn’t excuse any of the behavior and the continuing of telling stories that are inappropriate.

The last few months in Hollywood have been a very interesting time for everyone, especially the innocent. There are many men who are absolutely appalled by all of this, who don’t know what to do, and that’s why you have a lot of men not saying much to support the #TimesUp movement. I thought I should, because my feelings aren’t conflicted about it. Abuse, sexual abuse, abuse in any manner in the workplace or anywhere is unacceptable at this point. It’s time to move on from that. And so yeah, I thought I’d express that in that fashion. And I’ve Tweeted about that before. I donated my salary from the Woody Allen movie to #TimesUp last week without a Tweet. I did what I had to do, I’m doing everything I can. It’s time for a change.

AX: To ask a hopefully obvious question, should we take it that everybody on the LIVING BIBLICALLY set is respectful of people’s boundaries?

AX: What was the timeline of you going from working on THE DEUCE to LIVING BIBLICALLY?

KRUMHOLTZ: I finished THE DEUCE in October of 2016, and this came up in February of 2017. It just worked out.

AX: Could your character on THE DEUCE come back for Season 2?

AX: So you went right from playing an adult filmmaker to playing a rabbi?