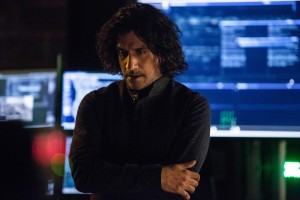 Helping Dylan dig up secret details is old friend from the Agency Julian Cousins, played by Naveen Andrews. The London-born actor spent six seasons as ex-Iranian Guard officer Sayid Jarrah on LOST. More recently, Andrews has been part of the international ensemble cast as Jonas Maliki in the Netflix series SENSE8, where people within an eight-person group can borrow each other’s abilities, even from continents away. SENSE8 ran for two seasons and a holiday special, and is now streaming its two-hour finale.

In an in-person chat, Andrews talks both INSTINCT and the end of SENSE8.

NAVEEN ANDREWS: I think so, yes.

ANDREWS: I didn’t do any research as far as the typing is concerned. I did actually meet two people who work in the acronym [the CIA]. I can’t really talk in detail about that, because obviously … 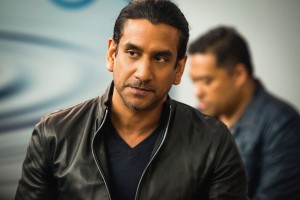 AX: How do you even go about finding those types of consultants?

ANDREWS: Oh, the network can help with that, in terms of people who are aware of [INSTINCT]. But I also knew people myself.

AX: Do you use your normal speaking voice English accent, or do you do an American accent for Julian?

ANDREWS: There are scenes where he has an American accent – obviously, he has to be in a certain environment where that’s expected – but in terms of his interaction with Alan, no. He has an English accent.

AX: But he works for the American CIA, as opposed to, say, Britain’s MI-6?

ANDREWS: Yeah. Because I’ve met people who have been born in the United States, but grew up abroad, or were educated abroad. My best friend was Italian, but was educated in British public schools from the age of five onwards. So …

AX: So Julian is American, but spent a lot of time in England?

AX: Do we get into Julian’s personal life at all?

ANDREWS: In this season, in terms of his relationships with any characters other than Alan’s, yes. You will see that.

AX: INSTINCT is set in New York, and actually shoots there. How are you enjoying working in New York?

ANDREWS: I love it, just because it’s a challenge, in that it’s not just the people, it’s the crew as well. Everyone’s very assertive, very loud, there’s a lot of noise when you’re working in the street. It can be quite wild in terms of the public, people who own the street. And you have to somehow do your job. Just like I guess doing LOST, the joy of a lot of that was the fact that you actually got to shoot most of that as exteriors, rather than in a studio.

ANDREWS: Well, [the INSTINCT producers and CBS] were very generous in allowing me to be able to fly to Berlin, or Napoli, or Paris, or wherever it was in the middle of this, and allow me to finish it. So I’m grateful. 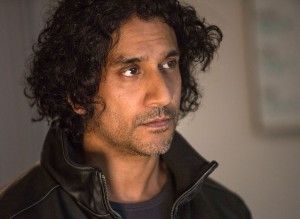 AX: How different is the experience doing a network procedural like INSTINCT compared to doing SENSE8?

ANDREWS: Completely different. Obviously, that show is a Netflix show, and we did two seasons, where you’re literally moving the crew around five continents. Completely different to a procedural show, where I guess there’s a certain formula that you have to adhere to, whereas SENSE8, as you probably know, is just [anti-formulaic].

AX: In terms of your SENSE8 character Jonas Maliki, were you satisfied with how the series ended for him?

ANDREWS: Yes. Both me and Daryl [Hannah, who plays Jonas’s lover Angelica Turing], yeah. I think Daryl was very pleased with it, too.

AX: Have you had much interaction with SENSE8 fans?

ANDREWS: Well, what was really odd was that, living here in L.A., you’re in your bubble, yeah? You don’t interact with people, you don’t talk to people. [Working in New York on INSTINCT], I’d have to go out. I was in Williamsburg, and you’d see people in the street, and it was amazing how many young people just seemed to really dig that show. We were going for that kind of emotional reaction, I’m very glad that we got it, and also, the fact that we got to finish it.

AX: And what would you most like people to know about INSTINCT?

ANDREWS: I think the fact that we’re doing something like this at this particular time, with everything that’s going on, is an important reason to watch it.