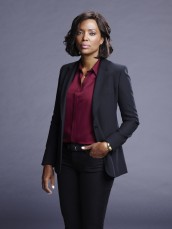 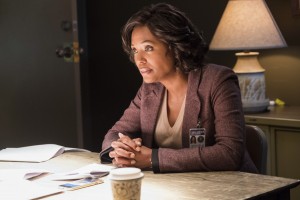 CRIMINAL MINDS is now in its thirteenth season on Wednesday nights on CBS. The series deals with the Behavioral Analysis Unit, or BAU, of the FBI. In the show, the regular characters catch serial killers and other human predators on a weekly basis.

Aisha Tyler joined CRIMINAL MINDS two years ago as forensic psychiatric Dr. Tara Lewis. The prolific Tyler is also a writer who contributes scripts to the series, and she’s also a director, producer and television host. She had to leave her regular gig on THE TALK to make room for all her other current projects – she completed directing and producing the feature AXIS last year, she continues to voice Lana Kane on ARCHER and of course there’s CRIMINAL MINDS. Tyler has previously been a regular on GHOST WHISPERER and had arcs on 24 and CSI, among other credits.

ASSIGNMENT X: Were you excited when you wound up as a regular on CRIMINAL MINDS?

AISHA TYLER: Yes. I love the show. I was only supposed to do six episodes [in 2015]. It was only supposed to be a guest arc, so I didn’t have any anxiety about jumping on a moving train. I was just visiting, and it was fun. It was a playful little arc. I was only going to be there while A.J. [Cook] was away on maternity leave. Honestly, I just felt so welcome there, it was such an easy transition for me, they were writing great stuff for me, I was very fortunate that I connected with the cast immediately. So when they asked me to stay, it felt very natural. Other than THE TALK, I don’t think I’ve ever had an easier transition onto a show that was already established than I had on CRIMINAL MINDS. I love the show, I love the cast, and I think it was such an effortless incorporation for me. It felt really natural.

AX: As Tara Lewis got deeper into the BAU, she was very enthusiastic, but she started off where she was just going to study how they worked there, and then she got engrossed in it. Did you feel that was like your own path into the series?

TYLER: Yes, absolutely. I knew the show, but it wasn’t like I’d seen every episode of it, so I very much took the same path of my character, finding my own path, finding my way, finding out how I could add value, because that was really important to me, not just as an actor, but in terms of the character, how she was going to add value to the team. They just wrote amazing stuff for me to do and it really felt natural and seamless.

AX: Shortly after you came on, CRIMINAL MINDS brought back erstwhile regular Paget Brewster as Emily Prentiss, the character that’s now heading up the BAU. It feels like a much more female-balanced show now. Does that make a difference for you?

TYLER: No, it’s just been lovely. I think it reflects the way that the world is moving. But for the women on the show, we all get along and like each other, we like working with each other so much. I think when there was the transition [after the departure of Thomas Gibson as Aaron Hotchner], and we needed a new BAU head, everybody, the entire cast, male and female, thought it would be Paget. It was a natural step for all of us. So for us, it just feels good, the dynamic is good, the energy is so positive, everybody’s loving each other, loving the work. And I think it hasn’t changed anything other than now we’re having a really good time. 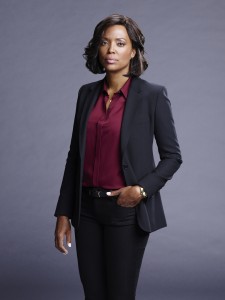 AX: There was an episode where we met Tara’s father and brother and found out that they had a troubled family history …

TYLER: It was “Mirror Image.” I feel like what was exciting about that episode was that we got to know a little bit about Tara’s past, her relationships with her family, why she wasn’t connected to her family, and a little bit of background that might have given you some insights into who she was and why she became a forensic psychiatrist, but also, it was interesting to play a relationship with a man who wasn’t really her brother, and she had to treat him like a brother to get information out of him.

AX: Did that episode affect how you played Tara going forward?

TYLER: No, because we had talked about that dynamic when I first got hired for the show. So I knew who she was and what her back story was. It evolved a little bit between that conversation with [show runners] Erica Messer and Breen Frazier and when we actually shot the episode, but I had that insight, and it was informing a lot of her back story before we shot that episode.

AX: How did you enjoy doing the episodes with Frances Fisher, who played a mastermind behind bars?

TYLER: She is amazing. She is a legend. She’s so kind and open. Her role was very, very special, very unique, and working one on one with her was a transformative experience. I really connected with her and was made better for it.

AX: There is some very dark subject matter on CRIMINAL MINDS. How is that to deal with as an actor?

TYLER: It’s difficult. It is challenging subject matter, absolutely. And sometimes you read a script and you think, “I don’t know how I’m going to get through this one.” But what I will say about CRIMINAL MINDS and why I think people love it so much is that it is a comforting thought to know that smart, dedicated, talented people are out there on the front lines every day, making the rest of us safer. That’s what CRIMINAL MINDS represents, that thoughtful people are catching the bad guy, and are relentless and tireless about making sure that they don’t strike again. So for me, that’s my focus when I’m making the show, is that we are representing a real group of people that every day are fighting to make us safe. And we have real profilers, as you know, on the show, that consult, that write. The stories are drawn from their experiences. And I just try to rely on the fact that real people are dealing with this kind of stuff every day, and then try to honor how challenging and how difficult it must be for them.

AX: You directed a film last year called AXIS. What can you say about that? Do you act in it as well?

TYLER: I directed it and I have a role in it, but I’m not the star of it. It’s a thriller.

AX: Is working on CRIMINAL MINDS sort of good research for making a thriller film?

TYLER: I think being on every set is good research for making films, because you’re watching people at the top of their game doing great work every day, and you can’t help but internalize that and learn from it, and when I was getting ready to direct, I was shadowing a lot of directors on other shows. I was [watching directors on] 24, THE WIRE, CSI, trying to learn, so that when I finally directed, I absorbed some of that experience and those skills, so yeah, it’s definitely helpful. I wasn’t on THE WIRE, but I shadowed there for awhile when a good friend of mine was directing.

AX: So you’ve been preparing for this …

AX: And what would you most like people to know about this season of CRIMINAL MINDS?

TYLER: Oh, this is going to be an extraordinary season. It already has been. It’s transformative, it’s emotional, I think the relationship between the members of the BAU is stronger than ever, and people are really going to be entranced by what happens this season.