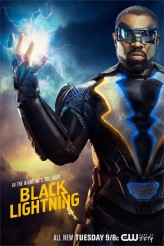 © 2018 The CW
The poster for BLACK LIGHTING
Interviews

The actor talks working on an African-American-led show

BLACK LIGHTNING is The CW’s latest series based on a D.C. Comics property. The new Tuesday-night drama shares an executive producer, Greg Berlanti, with the other D.C. adaptations, but BLACK LIGHTNING, developed for television by Berlanti’s fellow executive producers Salim Akil and Mara Brock Akil, has two notable differences. All but one of the protagonists are African-American and most of the main characters are adults in early middle age. 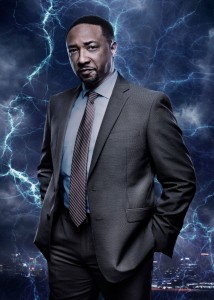 Jefferson Pierce (Cress Williams) is a beloved high school principal in the city of Freeland. Nine years ago, Jefferson left behind his electricity-shooting superhero alter ego Black Lightning in an effort to keep his family together. However, when his daughters are threatened and crime ramps up in Freeland, Black Lightning must come out of retirement.

Jefferson’s best friend is police detective Bill Henderson, played by Damon Gupton. Last season, Gupton was a regular on CRIMINAL MINDS as an FBI agent. He’s also played detectives in series regular roles on PRIME SUSPECT, EMPIRE and THE PLAYER. Gupton has also been a regular on RAKE, THE DIVIDE, GOLIATH and BATES MOTEL. His feature credits include WHIPLASH and LA LA LAND.

ASSIGNMENT X: You’ve played a lot of detectives and an FBI agent. Were you looking for a career in on-camera law enforcement, or this is just how it’s worked out?

DAMON GUPTON: [laughs] No. You know, this is actually honestly how it’s worked out. I’ve done a couple of other things, a couple of attorneys and whatnot, but this is the first time I’ve been fortunate to be able to play an African-American law officer that’s written from an African-American perspective. So this is a different kind of cop from the other ones. He’s a lot more connected to the community in ways that the other shows didn’t, even though they were great.

AX: What is the difference in working on an African-American-led show?

GUPTON: Well, it’s just the familiarity of the personas. Honestly, I think the chemistry of having a bunch of people that really love each other is universal. I think a lot of the experiences that we all share as black people, black American people, and one Brit, obviously, we’re all able to come together and commune in a way that sometimes you don’t get in other shows. The dialogue is realistic, and Salim has done a good job of making that happen for all of us. So like I said, to play a cop written from an African-American perspective in an African-American community is very interesting.

AX: How much control does Bill Henderson have over the people who are lower-ranking than him?  In the first episode, there’s a traffic stop scene where Jefferson is pulled over essentially for being black. I thought this was interesting, because on most non-African-American-written shows, there would be a follow-up scene of, “Oh, but not all white people are like that …”

GUPTON: Right. Yeah, I see what you mean. He has a lot of control over those people. He leads his own task force, in fact. But there is someone above him. And I think if you watch the show, you’ll start to see some interesting developments that way.

AX: What does Bill Henderson think of Jefferson Pierce?

GUPTON: He grew up with him. They’re best buds in a way, so they’re really close, they know each other’s families, they grew up in Freeland, so I think if anything, he feels like that’s his close confidante consigliere that he can talk to about things.

GUPTON: Absolutely. He’s working his way up the ranks, so he knows how powerful a presence Black Lightning is in the community, but he also thinks that Black Lightning is a problem because he’s a vigilante, he acts out on his own. We can’t have that.

AX: How long does it take Bill to find out the big secret about his friend Jefferson?

GUPTON: Oh, you have to wait and see that.

AX: But not right away.

GUPTON: No. I figure it’s definitely worth a slow burn [laughs].

AX: How angry off do you think Bill going to be if he finds out Jefferson is Black Lightning?

GUPTON: Oh, I think he’s going to hit the roof. If or when he finds out – that’s the ultimate betrayal, in a way.

AX: What was your reaction when you saw the superhero costumes on your fellow actors?

GUPTON: Oh, it was great. The first day, I walked in, and it was kind of funny, because Cress had his back to me. And then he just turned around and he was all lit up, and it hit me. Because I’m a superhero nerd, too. So I looked at him, and I was like, “Wow.” I just got hit by that, absolutely floored.

GUPTON: Marvel. I was an X-MEN dude, big time. So once I saw those movies come out, I was [indicates love].

AX: Do you think your character Bill might ever get superpowers?

GUPTON: You know what? That’s up to them, but I would super-lobby for that, because I would love to have superpowers. From a kid ‘til now, I think I’ve always dreamed about that.

AX: What power would you most like to have?

GUPTON: Personally, Damon would love to fly. I think if there was a power that Inspector Henderson was to have, I think he’d have to shoot something out of his hands. But they’ve got the lightning thing, so I don’t know what it would be. Or I used to love Cyclops from THE X-MEN, so the glasses and the eye power stuff. [Or] teleport and stuff. There’s potential, there’s potential. I’ll keep on them about that.

AX: In CRIMINAL MINDS, you had an episode where you did an instrumental performance. Are you a musician in real life?

AX: Do you still do that?

AX: So you alternate conducting with acting?

GUPTON: Yes, when I’m lucky. Haven’t been able to do as much in the last couple of years because of the four or so shows I’ve been on, but yeah, when I can, I squeeze it in.

AX: Is there any similarity between the two disciplines of conducting and acting?

AX: On a lot of shows with superheroes or people with superpowers, the actors talk about having to work opposite tennis balls when they’ve got shots where special effects will be added in post-production. Do you have that issue on BLACK LIGHTNING, or there isn’t too much stuff that’s not on set?

GUPTON: Hmm. No, no tennis balls. We’re there. For me at least – I can’t speak for the ones who have the superpowers right now. Generally, in my stuff [when Black Lightning is using his powers], lights flicker, I know he’s there. There are certain things they’re able to do.

AX: Do we meet Henderson’s family?

GUPTON: Yes, you meet my wife, I do believe.

GUPTON: This has been pretty much all-consuming. Some orchestra concerts coming up, looking forward to doing the complete JURASSIC PARK [score] with the Fort Worth Symphony in Fort Worth. I’ve worked with the Fort Worth Symphony a couple of times. These movies with live orchestras is a thing now. So I’m going to do that, possibly something with Storm Large in Toledo, possibly – we’re still trying to work out the schedule. But little things here and there. And acting-wise, maybe something will pop up over the summer.

AX: And what would you most like people to know about BLACK LIGHTNING?

GUPTON: I think they’re up for a very unique and different ride. So I hope everybody tunes in and gives it a chance. It ain’t your average superhero show, that’s for sure.

This interview was conducted during The CW’s portion of the Winter 2018 Television Critics Association (TCA) press tour.