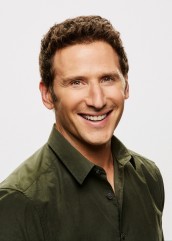 The actor talks his autobiographical comedy 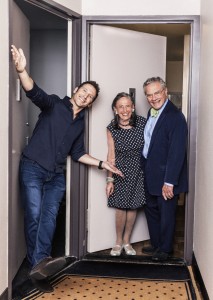 9JKL, in its high-rated first season on CBS Mondays, is created by star Mark Feuerstein and his fellow executive producer (and wife) Dana Klein. 9JKL is a comedy based on a time in Feuerstein’s life when he was living in a New York apartment building next door to his parents on one side and his brother and sister-in-law on the other. In the show, Feuerstein’s fictional alter ego is called Josh. Elliott Gould and Linda Lavin play his parents, Harry and Judy, while David Walton plays brother Andrew and Liza Lapira portrays Andrew’s wife Eve.

Feuerstein previously starred in FIRED UP, CONRAD BLOOM and eight seasons of ROYAL PAINS, as well as doing a villainous dramatic turn in last year’s revival of PRISON BREAK.

After a Q&A session is held on the set of the living room for Josh’s folks, Feuerstein hangs out in the extremely realistic-looking digs for a little more in-depth discussion.

ASSIGNMENT X: You were saying that all of your series regulars on 9JKL are …

MARK FEUERSTEIN: Our first choices. And it was a real Hollywood moment that I’ll share with you when we got Elliott. I don’t know how much I’m supposed to share about that, but I don’t care, because you guys are nice enough to stay this long and listen to me talk so much. We weren’t sure who was available, we had to look at other options besides Elliott [because he was on another new CBS series, DOUBT], and then on a morning, at eight o’clock after the premiere of the show he had been on, and I get a call, it’s from [fellow executive producer] Aaron Kaplan, and he goes, “That show he was on – it tanked. We can have Elliott.”

AX: You were also saying you have a Richard Dreyfuss story …

FEUERSTEIN: I love Richard Dreyfuss, he’s always been so kind to me, and I saw him at the Fox TCA. He calls my manager out of nowhere and he goes, “Steven, I’m calling you about the show [9JKL]. I don’t want the part of his father. I just want him to know that I think he’s an amazing actor, incredibly talented, and I don’t know if this is the show that he wants to do.” So it was a very confusing phone call [laughs]. But all I heard was, “He’s a talented actor.”

AX: Could he maybe guest-star as your uncle? Does your real father have a brother?

FEUERSTEIN: Okay, this is another great story. My real father, Harvey, has a brother, Andrew. My father is winding down at work. As a seventy-nine-year-old man, you become a little less essential at the law firm. So my Uncle Andrew says to my father, “You should become an actor. You’re incredibly talented – you were great on that episode that Mark cast you in of ROYAL PAINS” – in which he played the ice cream man – “Why don’t you be an actor?” So my father sits me down and he goes, “Mark, what do you think about me being an actor?” I said, “Dad, you’re such a personality, you’re such an incredible force of life – sure, you can do anything.” So my manager is currently setting him up with Martin Scorsese’s casting director, Ellen Lewis, Ellen Chenoweth, who casts all the Coen Brothers movies, and we’ll see what happens.

AX: Have your parents been out here to see any tapings of episodes?

FEUERSTEIN: They were here for the pilot. 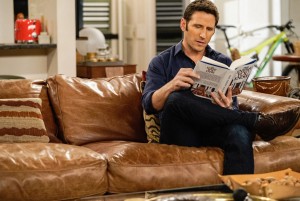 AX: This living room set is extraordinarily realistic to a certain type of lifestyle. Do you have any concerns that people who actually have this background are going to go, “Oh, my God, I’ve lived through this, I can’t watch”?

FEUERSTEIN: Concern? I hope everybody feels like this is their story on some level. When we were doing the international screenings for the show, I would go up to some of the reporters and the Italian reporters would come up to me and say, “This is an Italian family, yes?” And I would go, “Yeah, sure.” Then the Spanish reporter would come up and go, “This is a Spanish family, yes? You have written a Spanish family.” And then the Russian reporter would go, “You have written a Russian family, yes? It’s Russian.” And I would say “Yes” to all of them, because this family dynamic of an enmeshed family is international, it’s universal, and I think hopefully everybody can relate to a mother and a father who aren’t afraid to get in your business.